The executive vice president and chief financial officer of the Texas Medical Center spoke with Pulse about growing up in El Paso, saying yes to professional challenges, volunteering in Ghana and Guatemala, and getting her motorcycle license 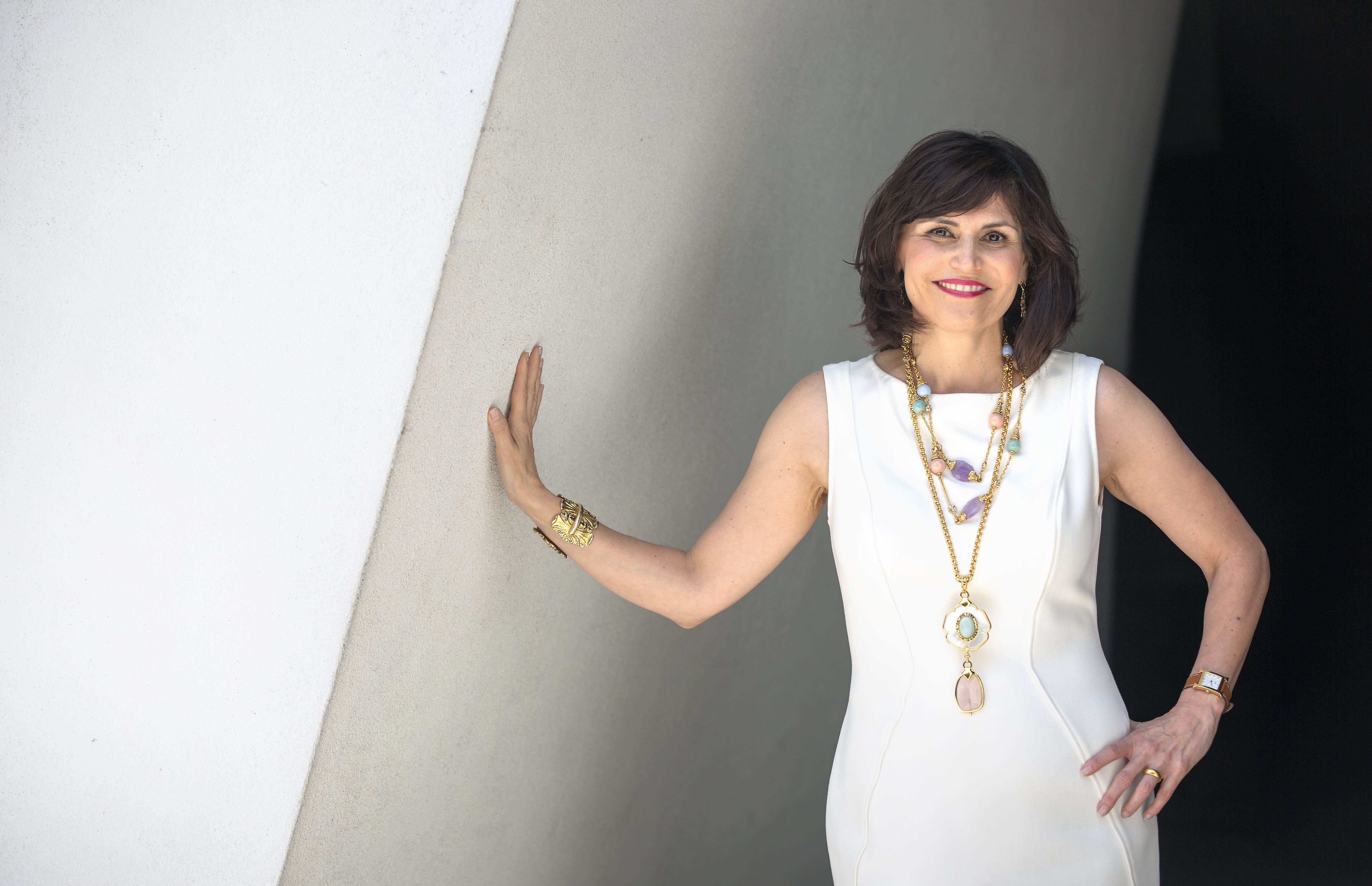 Q | Did you always dream of a career in finance?

A | Growing up in El Paso, I thought I wanted to be a math teacher. My sophomore year in high school, I got a job working at Baskin-Robbins and worked there through most of my college years. Eventually, the owner let me run one of his three stores, which was what inspired me to aim for a career in business. While at Baskin-Robbins I not only learned the ropes of the art of scooping ice cream, but, more importantly, the business side of the operations. When I graduated from high school I enrolled at The University of Texas at El Paso (UTEP) and declared business management as my major. I later changed my course of study when my accounting professor pulled me aside to encourage me to consider accounting as my major after I scored a perfect 100 on my very first accounting exam.

Q | What was it like growing up in El Paso?

A | Life was simple and easy. I was blessed with two loving and wonderfully supportive parents, an older sister and two younger brothers. Neither one of my parents had a college education, however. From a very early age they instilled in us that we would attend college.

When I attended UTEP, which is located on the west side of town about 20 miles from my parents’ home, I could easily see the cardboard shacks that were just across the border in Juárez, Mexico. The only thing separating those shacks from where I stood was a trace of a very shallow Rio Grande. I remember watching little boys and girls playing outside their shacks or swimming in the river. I felt so sorry for these young children, but as time went on I came to realize how happy these children seemed. This experience certainly played a role in my interest in humanitarian efforts.

Q | What brought you to Houston?

A | I graduated from college with a degree in accounting and a desire to work in the tax department of one of the Big 8 firms—Big 4 these days.

Unfortunately, they only hired people with graduate degrees, which is why I signed up for the Master of Taxation program at UTEP. A few months into the program, the IRS came knocking at my door—not because I was delinquent on my taxes, but because they were looking to recruit recent graduates into a new program they just started in Houston. I was torn because I always prefer to finish what I start. Ultimately, I finished my first semester and packed my bags to move to Houston. I figured that the experience I’d gain in the IRS program in one year would take me two years to learn in the classroom. I was right; the training I received was phenomenal. At the end of the program I was selected as one of the top three trainees. I sent my resume to two of the Big 8 accounting firms. I received offers from both firms and chose Ernst & Whinney—Ernst & Young or EY today—where I worked for about four-and-a-half years.

Q | Was it challenging to raise your son, Jeff, in the midst of a demanding career?

A | Jeff was born when I was at Ernst & Whinney. I took a few months off and when I went back to work it became very challenging for me to meet the demands of my clients, the firm and my family. I remember spending my lunch and dinner hours driving home to breast feed my baby, grabbing a quick bite and then rushing back to the office. Back then there were no lactation rooms for mothers to pump milk. My insensitive boss would tell me, ‘There are 24 hours in a day, Denise.’

After months of this very hectic schedule, my husband and I decided it was better for me to stay home with our son. I truly loved being home with my son, but after eight months I became somewhat bored with my routine. I could only play tennis so many times a week, go to the zoo and ride the train, etc.

One day, my husband received a call from a headhunter. My husband was not interested in changing jobs, but he said: ‘My wife is really bored at home and driving me crazy. Do you have any jobs for accountants?’ As luck would have it, he did. At Nabisco.

The timing was perfect because Jeff was attending a Montessori school and loved it. I took the job at Nabisco, where I found a better work-life balance which allowed me to spend more time with my family.

Q | You received an MBA from the University of St. Thomas. Why was that such an important decision for you?

A | Having a young son and a full-time job made getting my master’s degree very challenging. But I knew that if I wanted to advance my career, I needed a better understanding of all facets of the business world. The University of St. Thomas gave that to me.

By this time, my son was almost four. Our family routine became rather hectic again and, unfortunately, two semesters into the MBA program my husband and I divorced. I could have dropped the program altogether, but I recognized that this MBA would be our path to greater opportunities down the road.

So I forged ahead, but it was not without short-term sacrifices including, at times, missing my son’s activities, and always being the first parent to drop off my son at school and the last parent to pick him up after school. There was a lot of emotional guilt. This guilt was worse than the Catholic guilt I felt for missing church on Sundays.

Q | In 2015 you were named one of the most in uential women in Houston by Houston Woman Magazine. In 2016 you won one of the Houston Business Journal’s Women Who Mean Business Awards. This year, you were one of eight Outstanding Women in Banking and Finance honorees by the Women’s Resource of Greater Houston. What helps you excel, professionally and personally?

A | For me, balance includes self-care, so that my body, mind and soul are being refreshed daily. I do this by making deliberate choices about which opportunities to pursue and which to decline; recognizing that at times home takes priority over work and vice versa but, at the end of the day, it all balances out; and forming a strong network of behind-the-scenes emotional supporters.

Q | You worked with Nabisco until they closed the Houston plant. Since then, you have been with the Texas Medical Center. Can you describe that shift in your life?

A | I have been fortunate to serve as CFO at the Texas Medical Center (TMC) since 2004. When I first arrived, TMC was in the middle of diversifying its assets. TMC purchased the Nabisco cookie factory, where I was the controller for 12 years until the factory was sold to TMC. TMC’s CEO asked me to send him my resume. A few days later he called me and said, ‘Kiddo, I’d like you to come work for me.’ I thanked him and asked him what I would be doing if I accepted. I asked this question because I knew they already had a controller and a CFO.

He said, ‘I don’t know, kiddo, just come on board and we’ll figure it out.’ Here I am a single mom and this job offer is, ‘we’ll figure it out?’ Then, a few days later I received a call from TMC to offer me a job as Business Manager, a position that was created just for me. This new job took me completely outside of my area of expertise into three areas that I had absolutely no experience in, including commercial leasing, marketing and business development. I accepted with some trepidation but I realized this was an opportunity to try something new. By being willing to learn a completely new side of business, it allowed me to get my foot in the door at the greatest medical center in the world.

Q | You have such a strong commitment to community outreach and charity. Where does that come from?

A | When I was a student at UTEP and I saw what I saw across the border, I thought to myself: when I finally have the time to be able to do more for society, I’m definitely going to do it. Once Jeff went to college and I had a little bit more flexibility at the office and started meeting new people, I just made the time for it. You just have to decide it is time, and you just do it. It’s like brushing your teeth or working out.

Q | Can you share a volunteer experience that was particularly rewarding?

A | I traveled to Ghana with a group of women executives, where we equipped a small clinic in a remote village with medical supplies. On another trip to Guatemala with a Methodist church in Denton, we helped build a medical clinic in a small village that— before our visit—had no dedicated medical facility at all.

Q | What are your favorite things to do outside of work?

A | I work out just about every day, twice a week with a trainer and cardio and Pilates other days. It is a great stress burner that allows me to decompress after a busy day at work. But my favorite thing to do is spend time with my husband, Bob Sergesketter, my recently married son, Jeff, and his lovely bride, Elyse, and our goofy 115-pound Newfoundland, Wilson.

After a long week, Bob and I love watching sappy rom-coms at home. He’ll kill me for sharing this with everyone. My favorite movie is Sabrina with Audrey Hepburn. But we also love to travel, so we take one long vacation overseas every year. We really enjoy visiting places that are a bit off the beaten path and that let us experience cultures that differ quite a bit from our everyday lives in Houston. Last year we went to the Balkans, visiting Northern Greece, Albania, and Macedonia. This year we will be exploring the Baltics— Estonia, Latvia, and Lithuania—and because we’ll be in the neighborhood, we’ll spend a couple of days in the small Russian seaport of Kaliningrad and then we’ll wrap up the trip in Minsk, Belarus.

Q | What is something people would be surprised to learn about you?

A | I always like to finish what I start. Bob decided he wanted to buy a motorcycle and, before he bought it, he decided he wanted to take some riding lessons and he encouraged me to take the classes with him. I agreed and, keep in mind, I had never driven a standard vehicle in my life, so I really didn’t know how to mechanically operate a standard shifting vehicle.

The course was classroom training and training with an actual motorcycle. I was good in the classroom and horrible on the riding, but I am one of those people… I just don’t give up. The instructor finally asked me ‘Do you really want to do this?’ and I said ‘No, but I’m going to finish this course, dang-it!’

I managed to get through each of the obstacles they had given us, passed the written test with flying colors and on the riding portion of the test, I was the last one and I actually scored better than Bob, who was the best rider in the class, which was amazing because I was the worst rider in the class.

Denise Castillo-Rhodes was interviewed by Pulse reporter Britni N. Riley. This interview was edited for clarity and length.