Riding for a Cure

Riding for a Cure 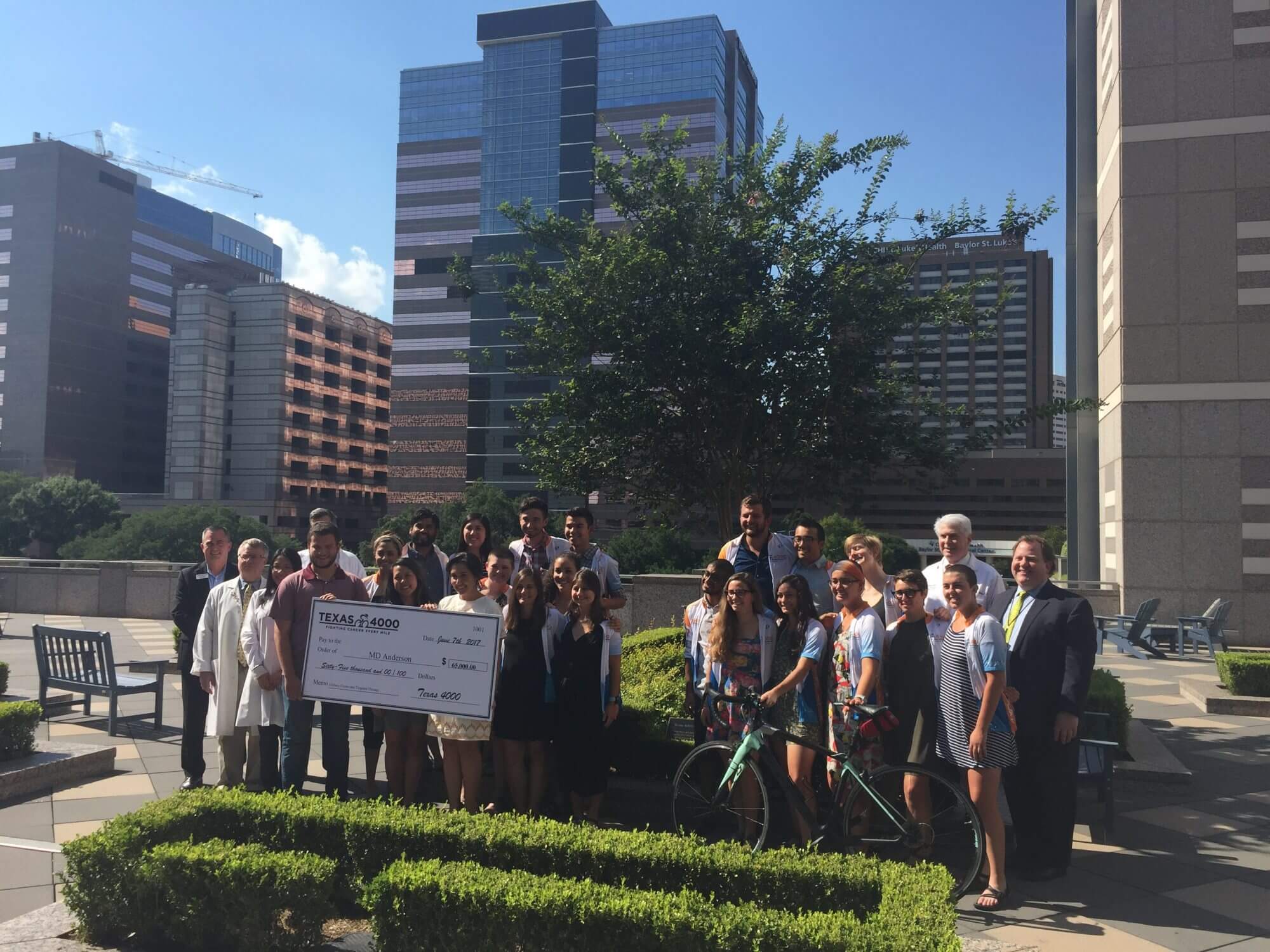 Five days into their roughly 70-day journey to Alaska, Texas 4000’s Team Ozarks made a pit stop in Houston to spend the day with pediatric oncology patients at The University of Texas MD Anderson Children’s Cancer Center and to drop off a $65,000 check to further MD Anderson’s cancer research.

Started in 2004 by Chris and Mandy Condit, Texas 4000 is a challenging 18-month program for students at The University of Texas at Austin. Not only do riders train throughout the year and cycle 4,000 miles to Alaska over the summer, but they also log dozens of hours of volunteering and raise money for cancer research.

“No distance is too great to travel, no hardship is too great to endure to achieve our goal to end cancer,” said Marshall E. Hicks, M.D., interim president of The University of Texas MD Anderson Cancer Center. “That sounds familiar because our patients have the same goal. Many come from long distances and many endure great hardships in their journey and they all look to us to us to help them achieve that goal to end cancer. I thank the riders for going on this journey to help us achieve our goal.”

One Texas 4000 alumnus is personally familiar with the hardships cancer patients face. Bucky Ribbeck, a third-year medical student at The University of Texas Health Science Center at Houston McGovern Medical School, participated in the 2013 Texas 4000. He received cancer treatment at MD Anderson.

“I was diagnosed with Ewing’s Sarcoma when I was in high school. I went to Strake Jesuit just down the road, and I was a pitcher for the baseball team,” Ribbeck said. “This was a curveball for me. It was a solid tumor in my pitching arm, and after interviewing several doctors, Dr. Valerae Lewis at MD Anderson ended up operating on my arm. She has really become a mentor for me today.”

After recovering, Ribbeck enrolled at UT Austin and stayed very active in the cancer community, but he felt there was more he could do.

As a third-year medical student, Ribbeck is beginning a surgical oncology rotation at MD Anderson. He hopes to work in pediatrics when he graduates, possibly with an emphasis in hematology or oncology.

During the Texas 4000 journey, the riders split up into three groups to make their way to Anchorage by way of the Sierras, the Rockies and the Ozarks. The Sierra route takes riders through West Texas, New Mexico, Arizona, Utah and Nevada, then heads north up the California, Oregon and Washington coasts and into British Columbia and the Yukon before finally reaching Alaska. The riders on the Rockies route travel through North Texas, Oklahoma, Colorado, Utah, Wyoming and Montana. The route then heads into the Canadian provinces and territories of Alberta, British Columbia and the Yukon before making its way into Alaska. The newest and final group of riders begin their journey in East Texas moving through Arkansas, Missouri, Illinois, Wisconsin and Minnesota, before crossing the international border into Canada, traveling through Ontario, Manitoba, Saskatchewan, Alberta, British Columbia and the Yukon.

The 4,000-mile journey takes about 70 days for the riders on each route to complete, during which time they are responsible for providing their own food, shelter and support. Along each route, riders stop in cities to share their reasons for riding, provide messages of prevention and early detection and deliver checks to cancer research institutions.

The check riders presented to MD Anderson Wednesday completed their $1.5 million donation to the hospital to continue the efforts of eliminating cancer.