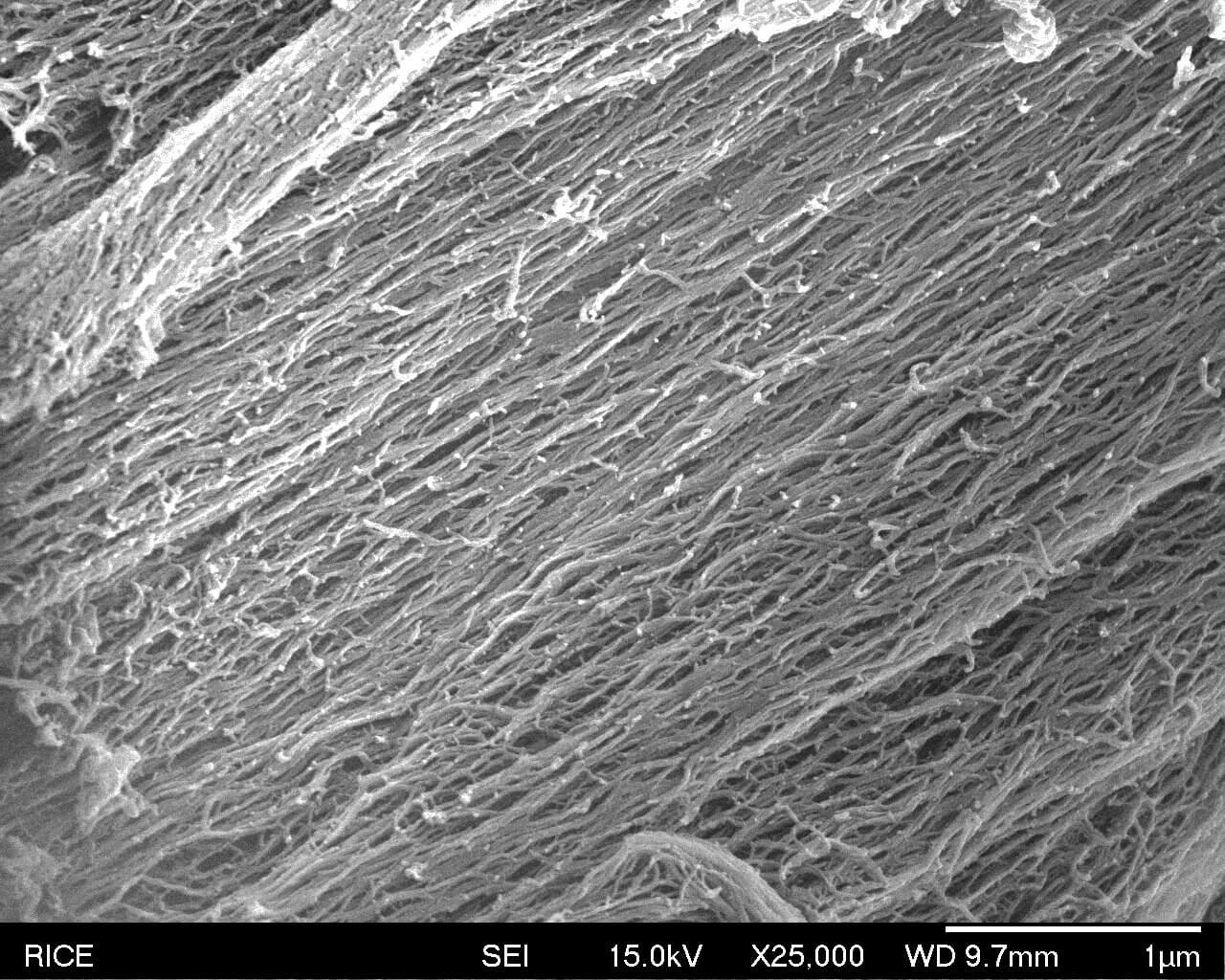 Rice University chemists can thank the mussel for putting the muscle into their new macroscale scaffold fibers.

The Rice lab of chemist Jeffrey Hartgerink had already figured out how to make biocompatible nanofibers out of synthetic peptides. In new work, the lab is using an amino acid found in the sticky feet of mussels to make those fibers line up into strong hydrogel strings.

Hartgerink and Rice graduate student I-Che Li introduced their room-temperature method this month in an open-access paper in the Journal of the American Chemical Society.
The hydrogel strings can be picked up and moved with tweezers, and Li said he expects they will help labs gain better control over the growth of cell cultures.

“Usually when cells grow on a surface, they spread randomly,” he said. “There are a lot of biomaterials we want to grow in a specific direction. With the hydrogel scaffold aligned, we can expect cells to grow the way we want them to. One example would be neuron cells, which we want to grow head-to-tail to aid nerve regeneration.

“Basically, this could allow us to direct cell growth from here to there,” he said. “That’s why this material is so exciting.”

In previous research Hartgerink’s lab had developed synthetic hydrogels that could be injected into the body to serve as scaffolds for tissue growth. The hydrogels contained hydrophobic peptides that self-assembled into fibers about 6 nanometers wide and up to several microns long. However, because the fibers did not interact with one other, they generally appeared in microscope images as a tangled mass.

Experiments showed the fibers could be coaxed into alignment with the application of shear forces, in the same way that playing cards are aligned during shuffling by pushing on both the top and bottom of the deck.

Hartgerink and Li decided to try pushing the fibers through a needle to force them into alignment, a process that would be easier if the material was water soluble. So they added a chain of amino acids known as DOPA to the sides of the fibers to allow them to remain water-soluble in the syringe, Li said.

DOPA — short for 3,4-dihydroxyphenylalanine — is the compound that lets mussels stick to just about anything. Hartgerink and Li found that the combination of DOPA and shear stress from passing through the needle prompted the fibers to form visible, rope-like bundles.

They also found that DOPA promoted chemical cross-linking reactions that helped the bundles hold their shape. “DOPA is really sensitive to oxidizing agents,” Li said. “Even exposing DOPA to air oxidizes it, and that aids in cross-linking the fibers.”

As a bonus, the aligned fibers also proved to have a curious and useful optical property called “uniform birefringence,” or double-refraction. Li said this could allow researchers to use polarized light to see exactly where the aligned fibers are, even if they’re covered by cells.

“This will be an important technique for us to make sure of the long-range order of fiber alignment when we are testing directed cell growth,” he said.

The researchers expect the aligned fibers can be used for macroscale medical applications but with nanoscale control over the structures.

“Self-assembly is basically the ability of a molecule to make ordered structure from chaos, and what I-Che has done is push this organization to a new level with his aligned strings,” said Hartgerink, a professor of chemistry and of bioengineering. “With this material, we are excited to see if we can impose this organization onto the growth of cells that interact with it.”