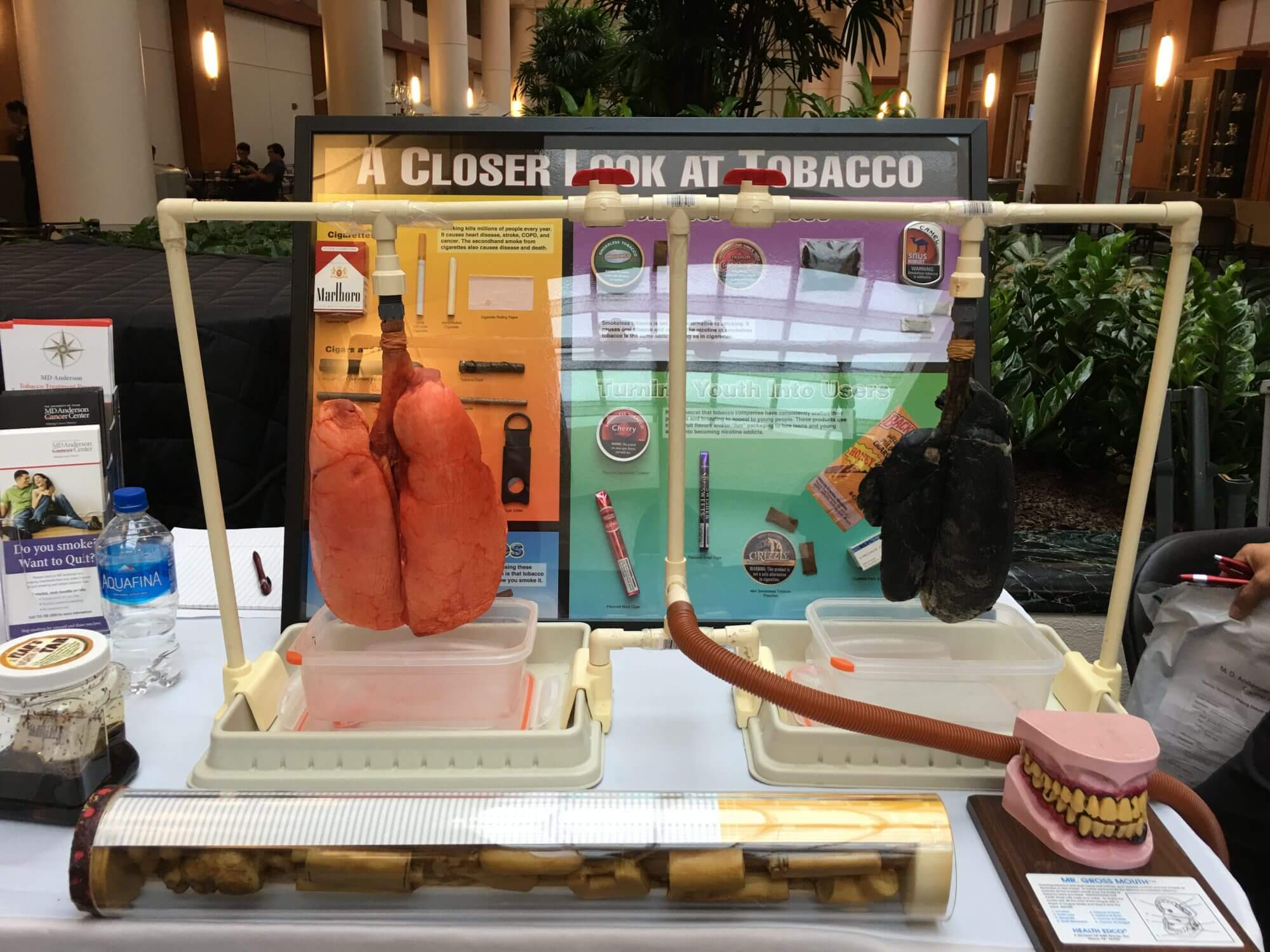 In collaboration with the Instituto de Cancerología Las Américas in Colombia and the Instituto Nacional de Enfermedades Respiratorias in Mexico, and as part of the youth tobacco prevention program, A Smoking Prevention Interactive Experience (ASPIRE), students from Michael E. DeBakey High School for Health Professions and Ebbert L. Furr High School teamed up to develop the art contest to promote anti-tobacco awareness. The event displayed 45 of 140 submitted pieces of anti-tobacco artwork created by middle school and high school students in Colombia and Mexico.

“We wanted the kids, in the process of creating their art pieces, to look for information, to educate themselves about the tobacco epidemic, especially if we know that 80 percent of the smokers live in low- and middle-income countries,” said Irene Tami-Maury, DMD, assistant professor in the department of behavioral science at MD Anderson and curator of the art contest. “Having this type of event, contest and educational activity for countries like Colombia and Mexico, where there is an increasing prevalence of tobacco use by youth and adolescents, is a way for them to … spread the anti-tobacco message among family members, close friends and classmates.”

“Even though we see a decline in conventional cigarette use among adolescents, we see quite a bit of an increase in new, emerging tobacco products, such as e-cigarettes, hookah, flavored cigarettes,” said Alex Prokhorov, M.D., Ph.D., professor and director of the Youth and Family Cancer Prevention Program at MD Anderson. “That concerns us a lot because that’s the perfect way to sustain that addiction in society.”

Prokhorov added that eliminating tobacco use can wipe out one-third of all cancers, not just lung cancer, making youth engagement events and activities to raise anti-tobacco awareness, such as the art contest, all the more important.

“I definitely think that [this contest] is getting the word out there, especially in countries that are more poverty stricken than the U.S. where they probably don’t have as much access,” said Piya Malhan, a DeBakey High School for Health Professions student. “It’s also giving [people in Colombia and Mexico] an incentive to increase the message, share it with their neighbors and share it with their friends. I feel really good that we have the opportunity to help them do that.”

While students saw the event as an opportunity to raise awareness among their peers in other countries, some students—including Furr High School student Victoria Martinez—were also able to inspire their peers here in Houston through their involvement in the event.

“They look at us, involved in these types of topics that everybody knows about at our age, but nobody looks at it from … the perspective of anti-tobacco,” Martinez said. “I’ve inspired a couple of my friends to really rethink what their decisions are [about] tobacco. I think that’s where we make the difference.”

In addition to the anti-tobacco artwork, two pig lungs—one representing healthy lungs and the other representing a smoker’s lungs—were on display to show how smoking damages lung capacity, function and color.

The lungs were inflated with air, using a pump, to simulate breathing. The comparison of the charred-looking, shriveled lungs of a smoker, which could barely hold any air when inflated, and the healthy set of red lungs that expanded normally with air served as a morbid, but real, visualization of the internal damage of smoking.

“You can go your whole life not knowing what goes on inside of you, but once you start seeing it, you’ll react differently,” Victoria Martinez said. “I think that’s what the whole message we’re trying to get out with these [art] visuals, as well.”

Tami-Maury and her colleagues were happy with the first year’s turnout and plan to expand the art contest to more countries in the future.