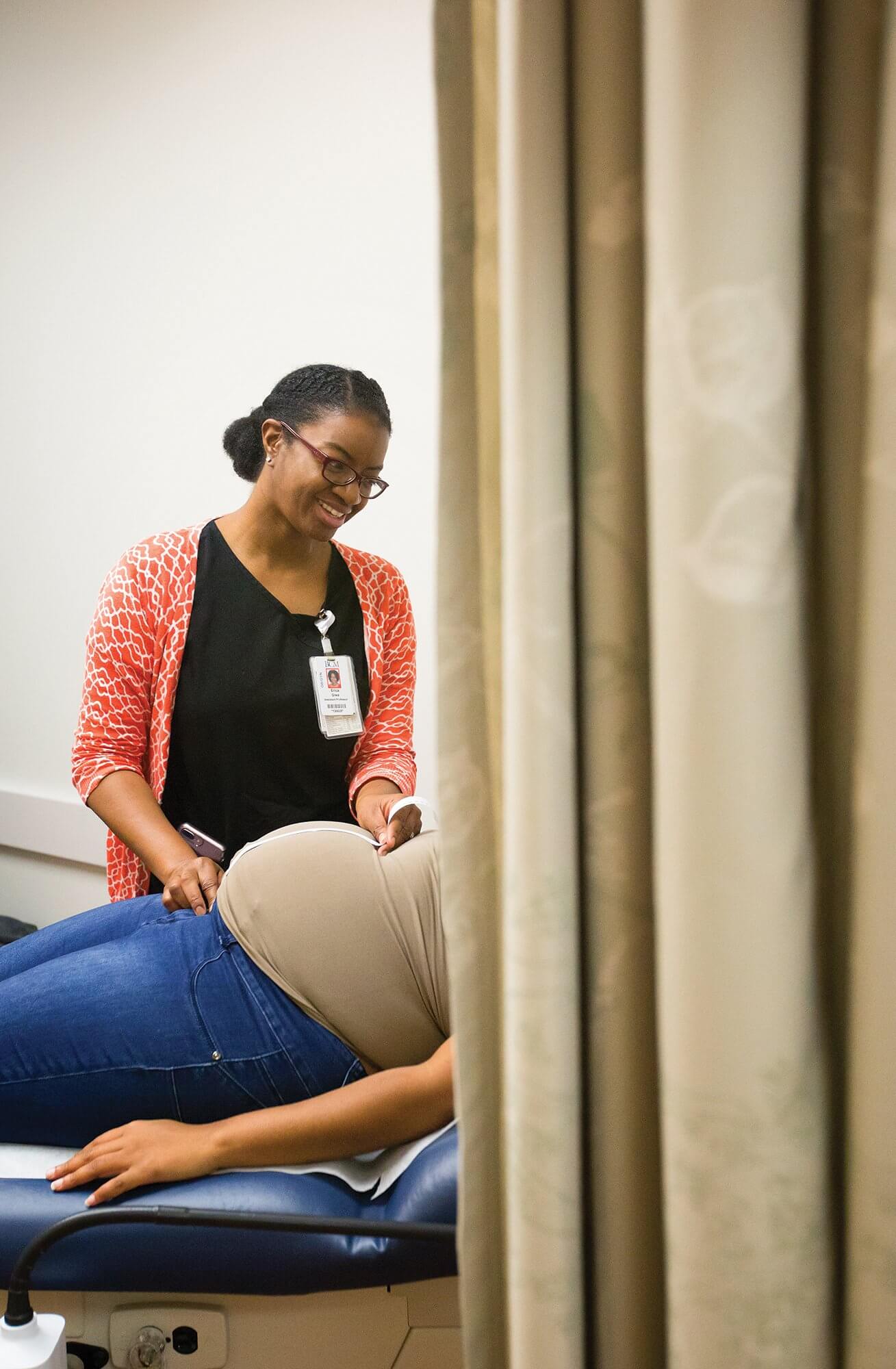 It’s 8 a.m. on a Thursday, and Jammie (pronounced Jay-me) has just finished a prenatal checkup. She is 19 weeks and three days pregnant— with twins—and has been coming to The Center for Children and Women in Southwest Houston for her prenatal appointments. It’s a unique clinic— part of Texas Children’s Health Plan— designed to provide a full spectrum of health care under one roof. Without the center, Jammie isn’t sure she’d be able to get all the services she needs, especially while carrying multiples. In Texas, that could mean the difference between life and death.

Worst in the nation

In 2016, the publication of two independent reports suggested that the maternal mortality rates in Texas had doubled within the past decade, ranking Texas the worst in the nation and on par with economically underdeveloped countries. The findings were shocking to investigators and the public alike, sparking a media frenzy that pointed to the state’s severe anti-abortion legislation and reintroduced the phrase “everything’s bigger in Texas.” But the reality is far more complex than any headline could suggest, and investigators are still analyzing data to truly understand the facts behind the numbers and, most importantly, how to reverse the trend.

Original research published in the September 2016 issue of the medical journal Obstetrics & Gynecology launched the first public outcry. When examining maternal mortality trends in the U.S. between 2000 and 2014, a group of Maryland-based researchers found Texas to be an outlier. According to their data, Texas maternal mortality rates showed “a modest increase” from 2000 to 2010, from a rate of 17.7 in 2000 (calculated per 100,000 live births) to 18.6 in 2010. But after 2010, “the reported maternal mortality rate for Texas doubled within a two-year period to levels not seen in other U.S. states.”

According to data collected by the Centers for Disease Control and Prevention (CDC) and the National Center for Health Statistics, the rate of maternal mortality in Texas jumped to 30.2 per 100,000 live births in 2011, then spiked to 38.7 in 2012 and remained above 30 through 2014—a rate significantly higher than the CDC’s annual national benchmarks over that same period, which ranged from 19.3 in 2011 to 21.5 in 2014.

That 2011 increase in Texas was the focus of the other major report, published prior to the Obstetrics & Gynecology research, by a state- appointed Maternal Mortality and Morbidity Task Force and the Department of State Health Services. Comprised of 15 Texas-based multidisciplinary experts and chaired by Lisa Hollier, M.D., professor of obstetrics & gynecology at Baylor College of Medicine and medical director at Texas Children’s Health Plan, the task force used additional metrics to analyze the deaths between 2011 and 2012. In addition to finding an increase in reported deaths during those years, the task force found racial disparity among the mothers dying in Texas. Black women were found to bear the greatest risk for maternal death, with a rate nearly three times higher than other women. In 2011 and 2012, black women were responsible for 11.4 percent of births in Texas, but they also claimed 28.8 percent of all maternal deaths. By comparison, white women accounted for generally equal proportions of total births and total maternal deaths, and Hispanic women and women of other ethnic and racial groups accounted for a lower proportion of total maternal deaths than total births.

Based on death certificates, the task force also determined that cardiac events, drug overdoses and hypertensive disorders like pre-eclampsia (formerly called toxemia) were the leading reasons for the maternal deaths recorded, and that the majority of the deaths didn’t occur in the delivery room or shortly thereafter, but more than 42 days after delivery.

“These findings were informative and concerning,” Hollier said. “They reinforce the need for detailed reviews of maternal deaths so that the problems can be understood and the right solutions identified to correct them.”

Advocates for women’s reproductive rights were quick to blame Texas lawmakers for the state’s spike in pregnancy-related deaths, citing the 2011 decision to slash the state’s family planning budget by more than $70 million and the 2013 mandate that abortion clinics meet ambulatory surgical center requirements—resulting in the shuttering of numerous women’s health clinics throughout the state.

But while both decisions undoubtedly created gaps in care for many Texas women, the timing doesn’t quite synch.

It is important to note that the data used for the maternal mortality studies was unusually difficult to analyze and potentially shaped some of the results, since the studies used varying benchmarks for measuring maternal mortality ratios.

For the Texas task force’s analysis, a pregnancy-associated death was defined as any woman who died within 365 days of birth or fetal death from any cause; the analysis examined all maternal deaths during the 2011-2012 time period, excluding motor accidents and non-pregnancy related cancers.

Not all states adopted the revised death certificate in 2003, so some data was based on a 42-day standard time frame while some had nonstandard time frames. Texas didn’t adopt the new death certificate—and with it, the revised “pregnancy question”—until 2006, and researchers noted that these variations in the death records led to findings that required adjustments. In addition, the Texas task force found that a number of maternal death cases identified in the 2011-2012 evaluation included incorrect classification coding for the cause of death, further muddying the data.

The inconsistencies were so pervasive that both studies acknowledged the fallibility of the data in their reports and the task force dedicated three of its six recommendations for improving maternal mortality rates to the area of data collection.

“We identified multiple problems with the consistency of the evaluation of the maternal deaths,” Hollier said. “I think there are opportunities for education as well as standardization regarding those evaluations to ensure that the appropriate information is collected at the time of death so that a complete assessment of the cause of death can be made.”

Shortcomings in record-keeping aside, experts agree there has been an increase in maternal deaths in Texas. Their challenge is understanding why.

Sean Blackwell, M.D., explained that the primary issue isn’t that medical care in Texas hospitals is worsening or below par, but rather that too many women are not receiving care.

“Every maternal death is a tragedy and we should strive for a case rate of zero,” said Blackwell, maternal-fetal medicine specialist at Children’s Memorial Hermann Hospital and department chair for obstetrics, gynecology, and reproductive sciences at McGovern Medical School at UTHealth. “But when you look at the data, and all of the improvements in safety and quality on labor and delivery units within Texas hospitals, it suggests that the potential increase in maternal deaths is not occurring at delivery or in the immediate postpartum period, but the time period from 42 to 365 days after birth—thus, outside the hospital. If anything, I would argue our hospitals are getting better. The major current opportunity for improvements is related to making sure women have access to care, especially our most vulnerable patients who are underserved and have chronic or severe medical conditions. We sorely need to have the system infrastructure and the ability to follow these women through that first year post delivery.”

For low-income women who qualify for Medicaid, benefits are available during pregnancy and up to only two months after birth, creating an abrupt end of care despite evidence that women remain at risk for the first year after their pregnancy has ended.

The task force ranked cardiac events and hypertension/eclampsia as the first and third most common causes of maternal deaths in Texas, statistics experts believe may be exacerbated by a general population that is growing unhealthier across the board, making pregnancies more complex.

“The number of women we see who have a BMI over 40, who have diabetes and hypertension, is definitely rising,” Blackwell said. “Today, well over half of women who are having babies in the state of Texas are obese. Our population is getting sicker.”

According to Hollier, the task force found that the rate of complications increased across all racial and ethnic groups in Texas between 2005 and 2014.

“There are a lot of physiologic changes that occur with pregnancy, so women who may have more pre-existing disease may be at higher risk,” Hollier explained. “We do know that when we looked at the numbers, we found that high blood pressure, diabetes, obesity, cesarean delivery and late prenatal care were all seen more commonly in those women who died compared to those who did not.”

Another observation: it’s difficult to measure how much the surge in prescription opioids and drug overdoses dovetails with maternal mortality in Texas, yet the task force did identify many missed opportunities for screening and referral to treatment during prenatal care, delivery hospitalization and postpartum care for mental health conditions.

“There’s no doubt that mental health and access to care for underserved women are major drivers,” Blackwell said, “but are they ‘pregnancy issues,’ or is that more of a societal issue?”

This question speaks to one of the most complicated components in the analysis of the maternal mortality numbers: the distinction between pregnancy-related deaths and pregnancy-associated deaths.

“Pregnancy-related deaths are due to any cause related to or aggravated by a woman’s pregnancy or its management, so this would exclude some of the opioid-related deaths, the homicides, and possibly some of the suicides,” Hollier explained. “But when we talk about Texans being increasingly unhealthy, that contributes significantly to maternal mortality, and pregnancy-related mortality does include women who develop pre-eclampsia more commonly now because they have pre-existing hypertension or, for example, because they are older.”

Where do we go from here? The task force made six major recommendations in their report, half focused on better data collection and analytics and the rest concentrating on improving access and continuity of care, tackling health inequities, and increasing screening for behavioral health services.

Already, state-run programs and institutions throughout the Texas Medical Center are working to address some of these issues.

The Center for Children and Women, which is open to families enrolled in the Texas Children’s Health Plan through Texas Children’s Hospital, provides a new kind of medical facility that combines a full network of care under one roof—including pediatrics, obstetrics, psychology and more.

Children’s Memorial Hermann Hospital has increased its focus on preconception and interconception health—the time period between pregnancies—which minimizes risk factors by helping women plan for their pregnancy through education and ongoing access to preventative care. The hospital has also partnered with the March of Dimes to create a new Perinatal Safety Center to research and streamline maternal and infant care.

The Texas Department of State Health Services is in the process of establishing an electronic database to track cases of pregnancy-related deaths. And in late May, Texas legislators passed Senate Bill 1929, which renewed funding for the task force and outlined specific directives, including postpartum depression services for low-income women.

“I am optimistic that we are making progress with improving access to care, and the spotlight that has been shone on the problem will help make it a priority among all the other health care challenges that exist in our state and across the U.S.,” Blackwell said. “The issues related to improving maternal mortality in Texas are not quick fixes.”