DeBakey High School Moves to the Heart of the Medical Center

DeBakey High School Moves to the Heart of the Medical Center 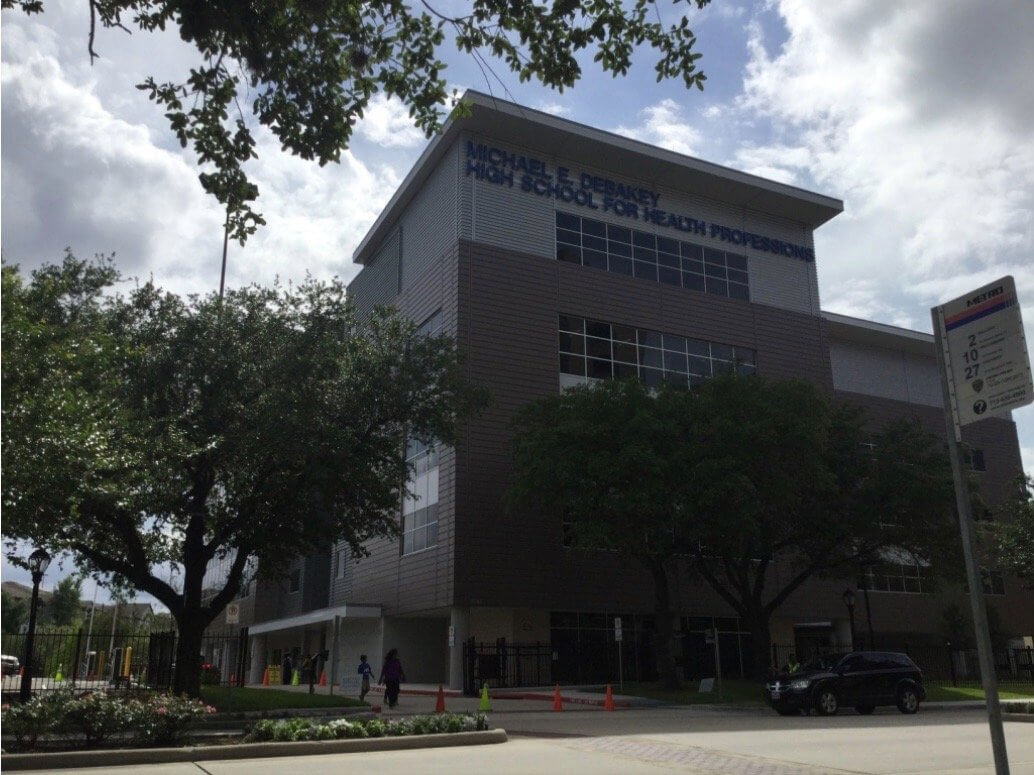 Designed by WHR/Lake-Flato Architects and built by Tellepsen Builders, the state-of-the-art, 194,000-square-foot building is located in the heart of the Texas Medical Center and will allow the nearly 1,000 current students increased access to medical center institutions to further their learning.

“This new building gives our students not only a state-of-the-art building they can learn in, but it also gives them the ability to walk across the street to Texas Children’s Hospital or TIRR Memorial Hermann,” said Agnes Perry, DeBakey HSHP principal. “As part of our curriculum, our students do regular rotations with Texas Medical Center hospitals, and it is a great advantage that we are conveniently located here in the medical center now.”

Rising senior Piya Malhan discovered she wanted a career in medicine as a result of one of her rotation experiences.

“Last November, I visited the operating room at Memorial Hermann Hospital through my clinical rotation, and before that I did not think of medicine as one of my career goals,” Malhan said. “After seeing the impact you can make on someone’s life through medicine, now I am thinking of doing general surgery.”

The construction of the new building has been in the works since 2012 when the Houston Independent School District agreed to rebuild or renovate 40 schools across the district. The land the school sits on today was formerly the Shamrock Hotel, which was purchased by the Texas Medical Center institutions in 1985 to expand the medical center beyond the traditional campus.

“So here we are today in the midst of the largest medical center in the world,” said Richard Wainerdi, Texas Medical Center president emeritus. “It is also the largest gathering of health professionals in the history of mankind, and all of this has occurred because of people of vision. One of the greatest of these people has this building named for him, Dr. Michael E. DeBakey. Of all the things he was most proud of, none gave him greater pleasure than this high school and these students and faculty.”

In addition to traditional classrooms, the school also has mock hospital rooms, science and research labs and medical training equipment, with teaching labs for dentistry, rehabilitation and patients as well as a gymnasium, fitness center, black box theater, art room and  music room.

Alfredo Moreno is also an incoming senior at DeBakey HSHP, and he is looking forward to closing out his tenure at DeBakey in the new building.

“We are all stressing the importance of leaving our legacy here as the first graduating class, and it still seems like a dream,” Moreno said. “I like to think of this new building as a clay ball that hasn’t been made into anything yet. I really want to leave my mark here and make sure that students after me have the best time possible here.”

As DeBakey HSHP moves into the next generation of inspiring youth, signs of its founder are ever present.

“Dr. DeBakey’s goal in starting this school was to get underrepresented kids to be more involved in the medical field, to stimulate kids and get them interested in medicine, and I want to continue that,” Perry said. “I want the students to be exposed to as much as they can. … I hope by coming here they can understand what a career in medicine can be.”