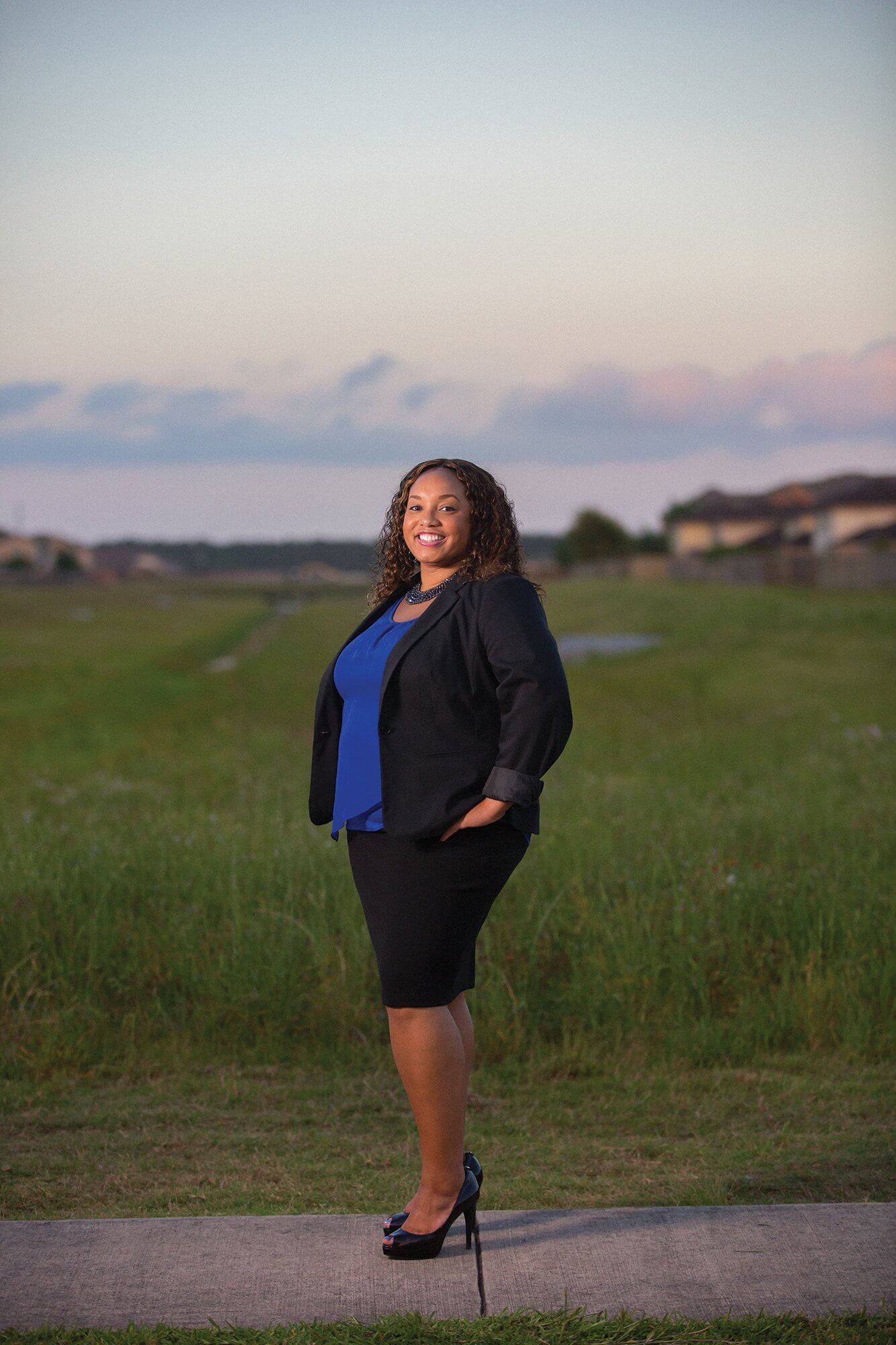 Last October, TAMIKA CROSS, M.D., a fourth-year obstetrics and gynecology resident at McGovern Medical School at UTHealth and chief OBGYN resident at Harris Health Lyndon B. Johnson Hospital, faced discrimination during a medical emergency on a Delta Airlines flight. She wrote about the incident in a Facebook post that has since been shared more than 48,000 times.

Her post sparked a social media movement about diversity in medicine, with physicians posting photos of themselves with the hashtag #thisiswhatadoctorlookslike. The 29-year-old Cross, who will be joining UTHealth as an OBGYN when she completes her residency in June, spoke with Pulse about being stalked by NBC’s “Today” show, the implicit bias we all share, and how to turn a negative situation into a positive experience.

Q | You grew up in Detroit, completed your undergraduate degree at the University of Michigan, then went to Meharry Medical College in Nashville, Tennessee. Did you always know you wanted to become a doctor?
A | From a very early age, I was interested in medicine. My maternal grandmother was a registered nurse, so she was probably my earliest exposure to any kind of medicine. I remember hearing her stories, and it was definitely something that interested me. As I got a little older, there was an opportunity to go to a medical academy through my high school. When I was in 10th grade, we received mail from the National Youth Leadership Forum, and I was really interested in doing the one focused on medicine, so with the help of my family I was able to go. It was a 10-day program in Atlanta at Emory University, and that was my first in-person exposure to medicine. They put us up in the dorms, and we were able to do different suturing and go to the OR, and we were working with residents and attending physicians. It was just a really good experience. When I came home I decided I was definitely going to apply for the medical academy, and so for 11th and 12th grade I took things like anatomy and medical terminology in addition to the average high school course load. When I went to Michigan I went with the pre-med concentration and just stayed on that path.

Q | After interning for one year at the University of Toledo, you transferred to UTHealth to complete your residency. You’re now one of two chief OBGYN residents at LBJ Hospital and finishing up your final year. What are your plans for the future?
A | Right now I am interested in academic medicine, which is one of the reasons I wanted to come here and train in this medical center, which is phenomenal for its resources and opportunities, especially for academia. I also have an interest in the private practice aspect, too— in having my own patients and being able to build a rapport with them. So I see myself doing a combination of both.

Q | Last October, you experienced discrimination on a Delta Airlines flight when you answered a page for a doctor mid-flight; your subsequent Facebook post describing the incident went viral and sparked a social media movement. What was it like to be thrust into the national spotlight like that?
A | It was surreal. The situation, when it occurred, wasn’t extremely surprising to me. I had experienced something like this before; I think most minorities have. You talk to any woman, any person of color, any minority, they would probably have similar experiences, not just in medicine but in the workplace in general. So while it wasn’t extremely surprising to me, I was shocked in the sense that during a medical emergency, we were still letting our own implicit bias get in the way of helping someone in need, especially not knowing the acuity of the situation.

I posted it to social media on a public post with the intent that it could spread. The point was for it to spread. I didn’t realize how many people would want to share it, but my point was to get Delta’s attention. The traditional ways of filing a complaint weren’t getting their attention; I had already spoken to a supervisor, had already been dismissed with some drink tickets, and I had already filed a formal complaint via email, but none of that was working. I’ve never had a post go viral like this, so I wasn’t anticipating that. I’m glad it did, but for a while there, I was very overwhelmed. I’m not used to that much attention, and I don’t like that much attention—I’m very private—so all of a sudden, in a matter of one day, everything changed. I had reporters calling me, calling my friends, calling my family, stalking me on Facebook, emailing me, waiting for me outside my job, my house. I definitely wasn’t looking for that and I definitely wasn’t expecting it, nor did I like it. The “Today” show called me and wanted to send a car to my house to fly me out. It was 11p.m. and they wanted to fly me out to come on the show at the crack of dawn the next morning. I was like, ‘I have work in the morning!’

All the major news stations wanted an interview: ABC, NBC, all the evening shows, Dr. Oz, CNN, Lester Holt. I didn’t do any on-screen interviews, but I did speak with a few print journalists and finally agreed to a phone interview with the “Today” show. I gave a talk the other day during Diversity Week at UTHealth, and it was actually the first time I’d talked to an audience about everything. I was too busy working at the time to do interviews.

Q | Looking back, what are your takeaways from the experience?
A | I think the first one is that implicit bias exists in all of us. A lot of times, many of us aren’t even aware of it. Since we don’t know it exists, then a lot of times it will influence our decisions, it will influence the way we respond to things, and so I think it’s very important for all of us to really sit down and reflect so that we can make a concerted effort to not allow our implicit bias to interfere with day-to-day interactions. For example, with this specific flight attendant, I think she allowed that to get in her way. Some people say, ‘Oh, it was your age, you look so young.’ Some say, ‘Oh, it’s because you’re black.’ Some say, ‘Oh, it’s because you’re a woman.’ Whatever it may be, it doesn’t matter, it’s still not right. So I think she had implicit bias but didn’t notice that it was coming into play, so she didn’t snap out of it.

After my talk during Diversity Week, someone said, ‘It’s funny because I didn’t realize my own implicit bias, and when you sat up here and you talked about this flight attendant, in my head, I assumed she was a white female, but it didn’t have to be. It could have been a male, it could have been a black male, it could have been whatever.’ A lot of people made that assumption just based on posts and things like that, and people were asking me, ‘Hey, what race was she? Because you didn’t say.’ And I didn’t. I didn’t say that in my post. So people had already made assumptions on what she was. I think that’s one important point, that we all have implicit bias and need to recognize it.

I think the only way we can overcome this is, number one, recognizing it and making a conscious effort to not allow it to interfere in our lives. But then also I think the more diversity we have in the medical field—the more common it is to see female doctors,
the more common it is to see doctors of color—it won’t be so surprising that this double minority is actually a physician. And I think we’re getting better. There are a lot more women going to medical school now. When you look at demographics, we’re closing the gap better in regards to gender, but we’re still not there. With race, we still have a long way to go. I think as we continue to diversify medicine and we really try to put time, resources and funding into pipeline programs to get more people from different backgrounds into the medical field, 10 to 15 years from now it won’t be so crazy that this young, black woman from Detroit is a doctor.

Q | Do you see yourself becoming involved in these types of programs?
A | Mentoring has always been something I’ve been passionate about and something I was always involved in during high school and college. Whether it was through my sorority or through my school or different community service organizations I was a part of, I’ve always enjoyed it. Since this situation in October, I’ve become even more involved. I’ve gone to a high school and worked with kids who were interested in medicine out in Orlando, I’ve spoken to some of the medical students at the Mayo Clinic, and I also did a mentoring in medicine program here at Baylor College of Medicine. That’s definitely a positive that has come out of the whole experience. People have contacted me to do these things that I’m very passionate about, and I love being able to inspire and motivate, because I was once in their shoes.

Tamika Cross, M.D. was interviewed by Pulse reporter Alexandra Becker. This interview was edited for clarity and length.