On the Side: Steven Powell, RN

On the Side: Steven Powell, RN 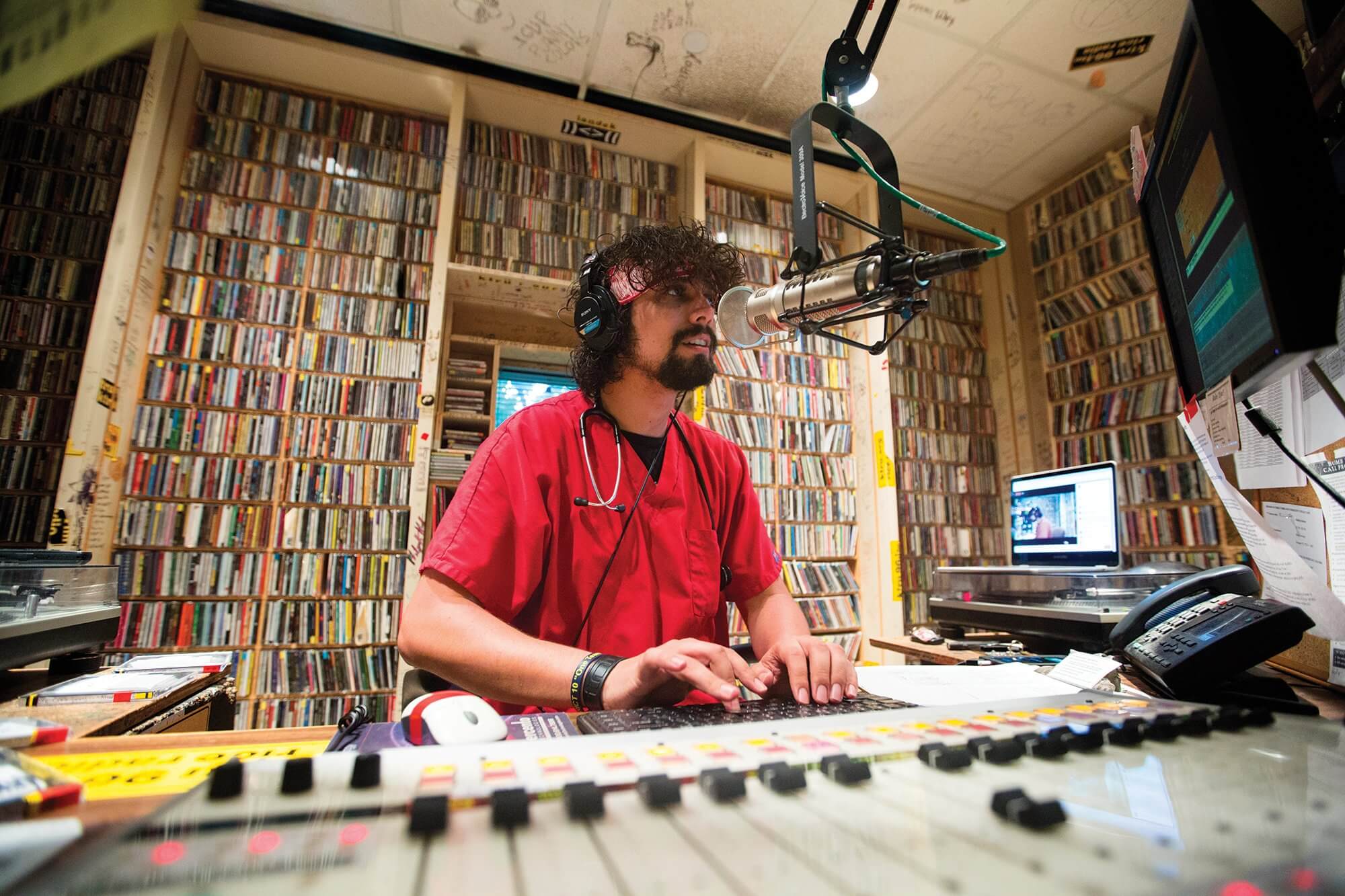 On a recent Tuesday, Powell, 29, finished his shift at the hospital at 4:30 p.m. and raced to the Rice University radio station, still wearing his scrubs and stethoscope. It’s a cramped space.

Every inch of wall space is stacked with vinyl records and CDs, and most surface areas are covered with KTRU stickers and decals. Powell often wears his long hair up in a bun at the hospital, but when he’s on the air, he lets it down, whipping it back and forth to the rhythm of the eclectic mix of indie rock and rap blasting in the studio.

“From an early age, I knew I wanted to do something in music,” he said. “I just didn’t know what or necessarily how to get into the music industry.”

But no matter where he lived, he always carried with him a passion for music.

“My mother was one of those people who didn’t try to force anything on me, neither did my dad,” Powell said. “My mom signed me up for a bunch of different classes, everything from tennis to martial arts. Out of all the different lessons she signed me up for, the one that I had the most enjoyment with was piano, so I continued to do music through the piano. That evolved into … learning the saxophone.”

Powell also picked up an interest in percussion and joined the drumline at the start of high school. After his senior year, he signed a contract with global nonprofit Drum Corps International, which allowed him to compete and tour throughout the country before starting college.

Powell attended Tulane University in New Orleans, starting in fall 2006. His reasons for choosing Tulane were two-fold: First, music is deeply rooted in the city’s culture and, second, he would be part of the first class accepted after Hurricane Katrina.

“New Orleans just had that devastation, so I was curious how the city would rebuild itself and I wanted to be a part of that rebuilding process,” he said.

During his freshman year, Powell volunteered with relief efforts and helped rebuild houses in New Orleans’ Musicians’ Village in the Upper Ninth Ward.

Throughout college, he stuck close to music, DJ-ing for Tulane’s radio station, interviewing hundreds of local and national musicians for his radio show, and playing a major role in the Tulane University Campus Programming group, which booked and produced concerts featuring artists including Ludacris, Lil Wayne and Third Eye Blind.

Powell worked as a college marketing representative for Sony Music in 2008, promoting record releases and upcoming concerts for alternative rock artists. That same year, the Recording Industry Association of America awarded him and his team with a personalized Gold Record for their contributions to promoting MGMT’s 2008 album Oracular Spectacular, which sold half a million copies in the U.S. and 1.5 million singles worldwide.

But Powell began to fall out of love with the music business. In addition to his work with Sony, he was juggling four other music-related jobs throughout the school year and it was quickly burning him out.

“It was fun for the first year or two, but afterwards, it felt like work,” Powell said. “I wasn’t enjoying it anymore.”

After graduating from Tulane with a degree in communications, he moved back in with his parents in Houston to reevaluate his life. He realized he always had a dormant passion for health care, but never fully pursued it because he was set on a career in music.

Powell enrolled in an anatomy and physiology course at Houston Community College “just to see” how it would go, he said. To his surprise, he ended up enjoying the course and excelled in it, cementing his desire to pursue medicine, specifically as a nurse.

“I focused on nursing because nurses are the ones who spend the most time with the patients,” Powell said. “I’m very much a people person.”

In May 2014, he graduated from Oklahoma City University’s nursing program and went to work at the VA Medical Center to honor his grandfather, who served as a Marine for four decades—from the Korean War through the Gulf War.

“As a nurse at the VA, I’m trying to provide the highest care possible for the veterans,” Powell said. “The veteran population is very unique and there’s a certain pleasure in knowing that I’m serving someone who served in the military. I’m giving back.”

Tags | DeBakey, DJ, music, nurse, nursing, on the side
Advertisement