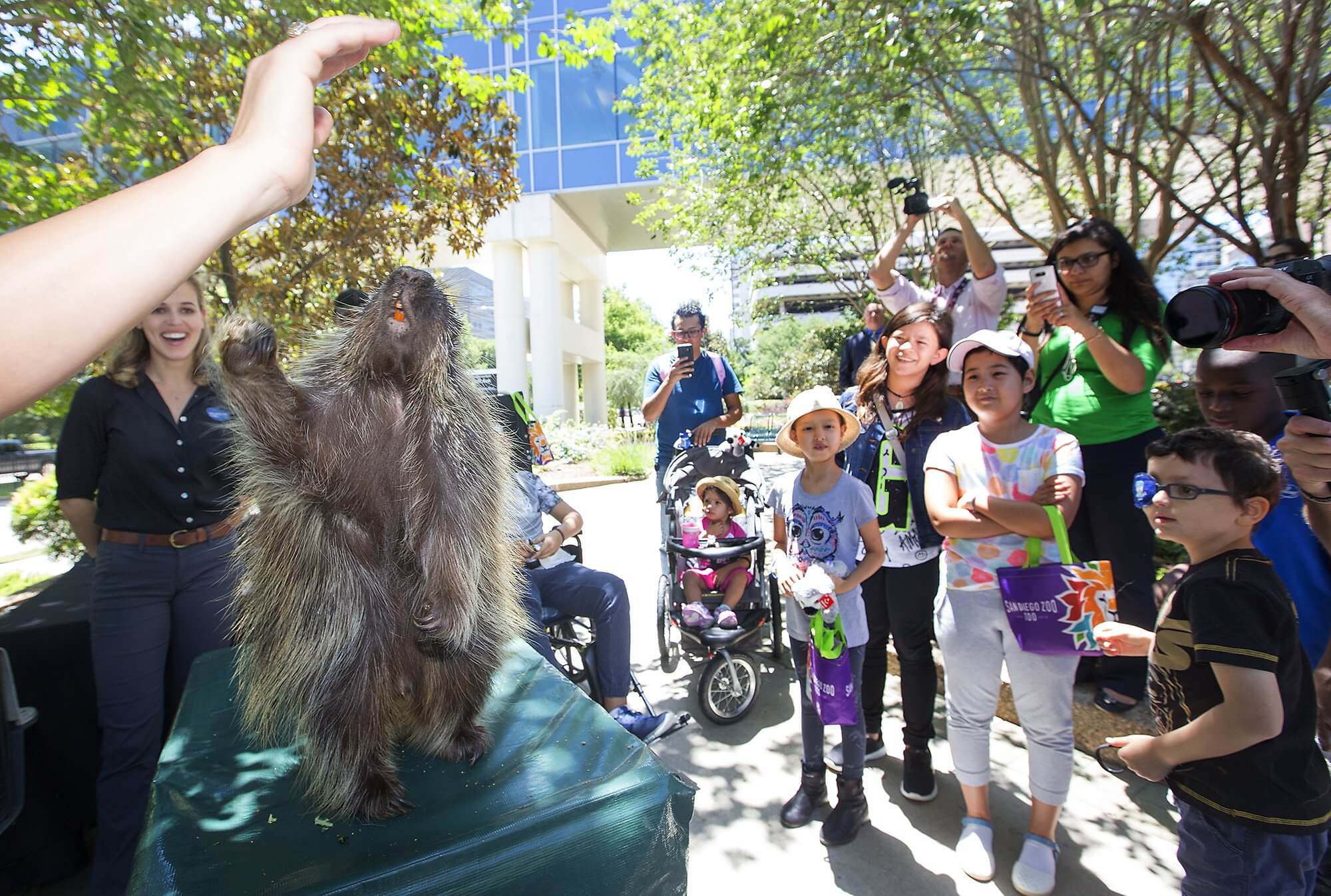 The San Diego Zoo is bringing the excitement and joy of a trip to the zoo straight to pediatric cancer patients at MD Anderson Children’s Cancer Hospital, who don’t even have to leave their beds.

The zoo’s television broadcast channel, San Diego Zoo Kids, will be streamed at MD Anderson. In addition, the channel shot several segments at the Houston Zoo, which will air in the coming weeks.

The zoo has worked for nearly a decade to bring the therapeutic healing that interacting with animals can bring to some of the children who need it most: those battling cancer.

Seven years ago, a nurse in Northern California wrote to the San Diego Zoo to share with them the positive effects their “Panda Cam”—a live video feed of the panda enclosure at the zoo—had on her patients.

“As this nurse was checking patients in for long-term chemotherapy, she asked them to bring a laptop or an iPad and she taught them how to log into Panda Cam,” said Debra Erickson, marketing director of communications and interpretation at the San Diego Zoo. “She told us that her patients who watched Panda Cam had to take less pain medication, had less depression, and were able to sleep through the night.”

“Our research shows that it calms the children, distracts them from being in the hospital and it makes them happy,” Erickson said.

The channel runs on an 18-hour loop, sharing five- to seven-minute stories on animals from zoos around the world.

“We like to highlight the zoos in the local community where the channel is shown,” Erickson said. “We just spent several days at the Houston Zoo and we filmed five stories that will air on the channel.”

Situated just north of MD Anderson, the Houston Zoo has worked with many patients from the medical center over the years and strives to offer a respite from their daily challenges.

“We are thrilled about this collaboration because we are neighbors with MD Anderson and the medical center,” said Lee Ehmke, president and CEO of the Houston Zoo. “We are a healing place… when people come to the zoo you are surrounded by nature and you can see people’s faces light up. And now we are bringing that to their hospital rooms.”

At the Houston Zoo, the San Diego Zoo Kids channel filmed encounters with the endangered Atwater’s prairie chicken (there are only 100 left in the world), the endangered Houston toad, the Patas monkey, elephants and an injured sea turtle.

“We had an awesome time filming at the Houston Zoo,” said Olivia Degn, host of the San Diego Zoo Kids channel. “In one of our stories we washed an elephant—three-year-old Duncan. He needed a foot scrub and we were very happy to help him with that.”

Degn studied animals in college and worked at a zoo in Australia. She always dreamed of working with animals and interacting with children.

It’s amazing that we can be the entertainment for them, give them a smile and let them think about something other than their routine,” Degn said.

To kick off the launch of the San Diego Zoo Kids channel at MD Anderson, patients were treated to a visit from several animals from the Houston Zoo in the rose garden of the hospital.

“I’m really excited about this station because I really want to see the animals and learn more about them,” said Trey, an eight-year-old MD Anderson hematology patient from Houston.

While in the rose garden, pediatric cancer patients and their families saw an Eastern screech- owl, a Madagascar tenrec and a North American porcupine. Degn and a zoo keeper from the Houston Zoo taught the kids about the unique characteristics of each animal and even showed them a few tricks.

The channel is now available in all patient rooms and waiting areas in M.D. Anderson Children’s Cancer Hospital.