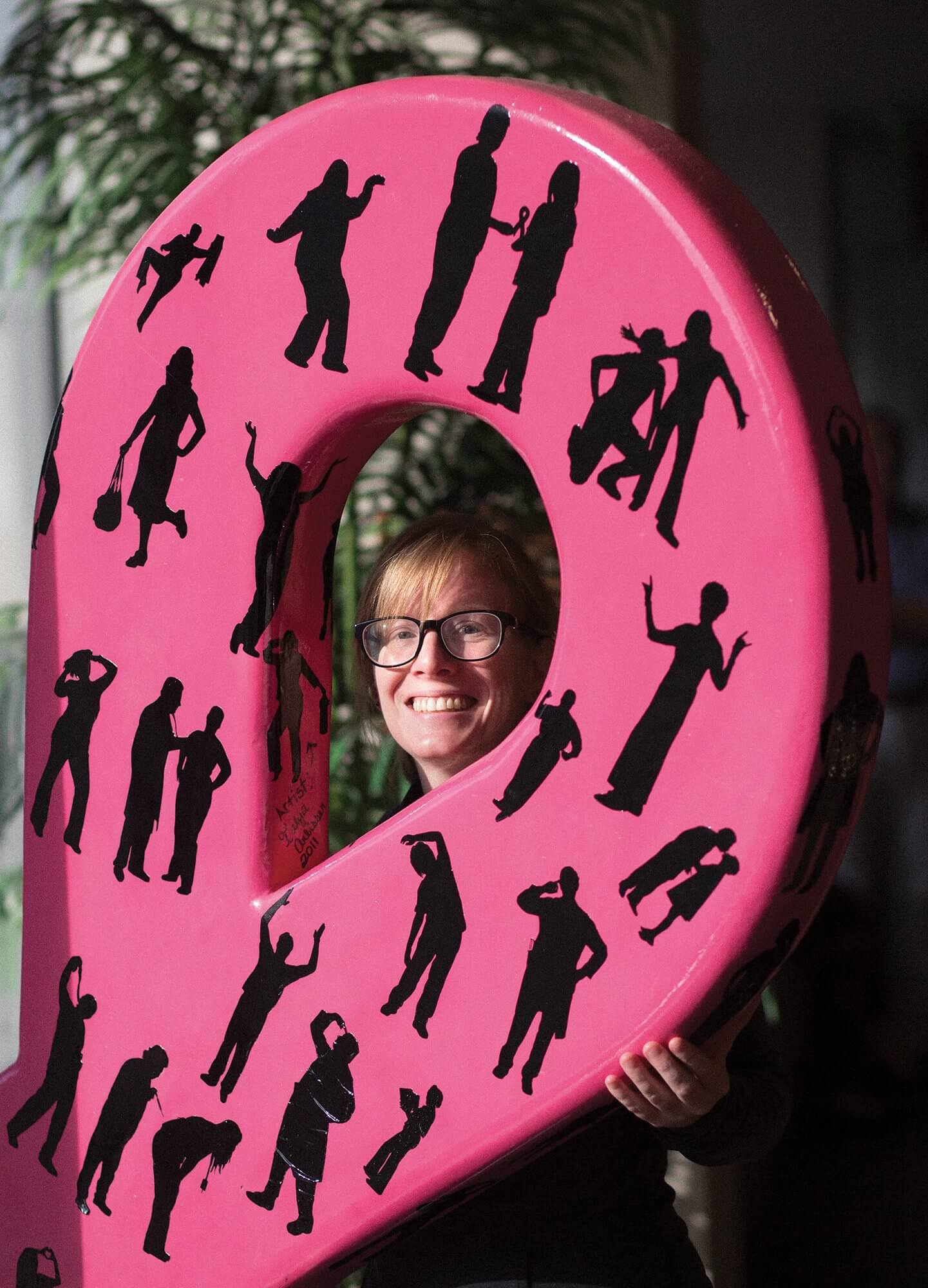 Natalie Bossenberger answered a phone call from her parents in 2012. In a matter of minutes, the way she viewed her health—and her future—changed profoundly.

Her father told her he had recently tested positive for a BRCA genetic mutation. With two aunts who had been diagnosed with breast cancer, Bossenberger knew this was part of her family’s health history. Now, at age 30, she realized a predisposition for breast cancer might be something she carried in her very own genes.

“My parents said he got tested for me and my brother, so we would have that information and do whatever we chose to do,” Bossenberger said. “I chose to go ahead and get tested.”

Within a week of giving a saliva sample to a Baylor College of Medicine lab, Bossenberger had the results: positive for a BRCA1 mutation.

BRCA genes gained international attention in recent years when actress Angelina Jolie tested positive for a BRCA1 mutation and elected to have a double mastectomy. The discovery of the link between BRCA mutations and breast cancer, however, happened more than 20 years ago. Mark Skolnick, Ph.D., led a team of scientists who identified the BRCA1 gene amid a fierce competition dubbed the “race for cancer gene” by The New York Times.

The BRCA1 gene and BRCA2, identified in the United Kingdom two years later, are tumor suppressor genes. They help repair damage to DNA. A BRCA1 or BRCA2 mutation can result in DNA damage remaining unrepaired, which in turn increases the possibility of cancer developing. The acronym BRCA is derived from BReast CAncer.

The positive BRCA1 result put Natalie Bossenberger in a growing category known as “previvors”—people who are predisposed to a certain disease they do not yet have.

As a nurse, Bossenberger is familiar with medical jargon. But during her meeting with the genetic counselor after receiving her positive result, she didn’t want to be Nurse Natalie. She wanted to be a typical patient, a young woman who just learned her likelihood of being diagnosed with cancer had skyrocketed.

“I went into the appointment asking them to talk to me like I’m not a medical person. I wanted to be talked to at that basic level,” Bossenberger said. “They give you such a large amount of information and statistics. Every year I have them repeat it to me again because it’s so overwhelming.”

Prophylactic mastectomies. Removing the ovaries and fallopian tubes. Watching and waiting. Extra tests, new specialists. Her head swimming with options, Bossenberger decided to “watch and wait.” Every six months, she sees either Julie Rani Nangia, M.D., director of the Breast Cancer Prevention and High Risk Clinic at Baylor College of Medicine, or Matthew Anderson, M.D., Ph.D., assistant professor of obstetrics and gynecology at Baylor. She gets an annual mammogram, breast MRI and pelvic ultrasound to check for breast and ovarian abnormalities. Anderson always orders a CA 125 blood test, as elevated CA 125 levels can indicate various forms of cancer.

But even after years of watching and waiting, Bossenberger is constantly reevaluating.

“Every time I go see a doctor, I’m always rethinking my decision. Should I do the mastectomy? Will I regret it? What if they find something this time?” she said. “The good thing about the breast MRIs is that the rate of finding cancer extremely early is high. I have that cushion in the back of my mind that even if they do find something, the chances are that it’s going to be early and treatable.”

Once a mutation in a BRCA gene is identified, deciding how to proceed is complicated by many factors. One of the most significant is family history.

“Some women have a lot of breast cancer in their families and have seen a lot of family members die,” Nangia said, recalling a woman who saw a number of relatives develop the cancer at a young age, between 25 and 35. “She decided to have prophylactic mastectomies at 25 because she just wanted to live her life and not worry about it.”

On the other hand, if a patient’s relatives typically develop cancer later in life, or tend to have cancer that is highly treatable, she may opt for a more conservative approach. Nangia said patients who still want to have children and would like to breastfeed also may choose to watch and wait and plan for surgery further down the road. Many patients have their ovaries and fallopian tubes removed around age 40 to 45, she said.

“There’s an intrinsic risk in just having a BRCA mutation, but not all BRCAs are the same,” Nangia said. “That’s where having the correct knowledge to make these decisions is helpful.”

Judy Calabria’s BRCA path began similarly to Bossenberger’s—with a tip from a relative. She decided to get tested after a letter from a cousin who had been treated for breast cancer mentioned that her daughter was also being treated for breast cancer. That information, combined with a suspicious mammogram and consideration of other cancer history in the family, inspired Calabria to get tested in May 2013. Her test came back positive for the BRCA1 mutation.

Calabria, then 52, opted for prophylactic surgeries and had a double mastectomy. She had her ovaries and fallopian tubes removed, as well.

“I acted quickly—both of my parents died of cancer,” Calabria said. “I know through family what living with cancer is like, and I thought if there was any way to prevent mine, I wanted to be proactive about it.”

Had she been 20 years younger, still dating and planning to have children, her choice may have been different, she added.

“Everybody has to make their own decision about surveillance or surgery,” Calabria said. “It’s not an easy decision at any age.”

While knowing you have an increased risk of developing cancer has many advantages, Bossenberger noted it can be “a double-edged sword.”

“Not knowing is not good, but sometimes knowing too much is not good, either,” she said. “Sometimes I start to think, ‘Oh, my gosh, I’m going to be that mid-30-year-old woman with breast cancer. I’ll never be able to have children.’ It snowballs into a terrible conclusion that’s probably not going to happen. But I’m happy that I know, because I’m more aware of subtle changes to my body and would hopefully catch it in time.”

To help cope with the overwhelming decisions and emotions connected to BRCA mutations, many choose to attend meetings with Facing Our Risk of Cancer Empowered (FORCE). Calabria volunteers with the national nonprofit and Bossenberger attended meetings while she was weighing her options.

Calabria, who leads FORCE meetings, says she tries to hold five to seven per year—both on the main Texas Medical Center campus and at MD Anderson’s Sugar Land campus. She is working on adding meetings north of Houston.

“I just retired, so I’m happy to give as much time to this as I can,” Calabria said.

Nangia and her colleagues also hold local conferences where they review current literature related to BRCA mutations, discuss emerging topics and give patients the opportunity to meet experts in the field and ask questions.

“The longer we follow BRCA mutation carriers and the more information we get, the more data we’re getting about additional risks,” Nangia said. “There are a lot of subtle nuances.”

Being identified as previvors places Calabria and Bossenberger in a complicated medical limbo. Geneticists are now able to identify previvors for a multitude of diseases, which marks a tangible advancement for science but also raises ethical and philosophical questions.

When it comes to health, is there such a thing as too much information? For Calabria, learning about her BRCA1 mutation and being able to take action was “empowering.” The surgeons at The University of Texas MD Anderson Cancer Center who performed her double mastectomy found irregular cells that could have led to cancer, further solidifying her confidence that she had made the right decision.

“For other genetic conditions, however, there isn’t much you can do medically,” said Amy McGuire, J.D., Ph.D., the Leon Jaworski Professor of Biomedical Ethics and director of the Center for Medical Ethics and Health Policy at Baylor. “You might make some lifestyle changes, but there’s no real intervention you can do to prevent the disease from occurring.”

In some cases, patients may decide they simply don’t want to know. Nobel Prize winner James Watson, Ph.D., one of the pioneers of genetics research who discovered the structure of DNA and helped initiate the Human Genome Project, chose to have information related to Alzheimer’s omitted when his genome was sequenced.

“Since we can’t do much about Alzheimer’s disease, I didn’t want to know if I was at risk,” Watson said when he was presented with a copy of his genome at Baylor in 2007. “My grandmother … died of Alzheimer’s at the age of 84. So I had a one in four chance of sharing the wrong form of that gene.” Watson did not want to spend his later years wondering whether every forgetful moment was a sign of the disease emerging.

Watson did discover a BRCA1 mutation and shared that his sister had been diagnosed with breast cancer at age 50.

Concerns about discrimination also deter some from undergoing genetic testing. The Genetic Information Nondiscrimination Act (GINA) protects individuals from discrimination in health insurance and employment based on their personal genetic information. Certain aspects of the Affordable Care Act (ACA) also protect from such discrimination—measures related to pre-existing conditions, for example. GINA and the ACA are far from comprehensive, however, when it comes to genetic discrimination.

A bill currently under consideration, H.R. 1313, would essentially allow employers to require employees to share genetic information as part of workplace wellness programs. Those who do not comply could be charged more for health insurance. The bill has already passed a committee vote and is expected to be included in the ACA replacement.

Both Calabria and Bossenberger said their insurance covered and continues to cover a large portion of the expenses associated with having a BRCA mutation. The uncertain future of the ACA, however, has many concerned that a pre-existing condition may soon, once again, become a liability when seeking health coverage.

Another major concern surrounds children. When someone tests positive for a BRCA mutation, part of the subsequent meeting with a genetic counselor includes discussing who in the family is at risk and how to disclose that information, Nangia said. When at-risk family members are underage children, however, the situation becomes more complex. BRCA1 and BRCA2 mutations are autosomal dominant mutations, meaning you only need one mutated gene to be affected. If you have the mutation, your children have a 50 percent chance of having it, too.

Though children of BRCA mutation carriers have a high probability of also having the mutation, many experts, including the American Academy of Pediatrics (AAP), believe that children should not be tested for mutations related to adult-onset diseases. Instead, parents should wait until children are adults and can make their own decisions about testing.

According to the AAP, if it’s a condition that’s not going to manifest in childhood, you should wait, McGuire said. “You should preserve what’s called their right to ‘an open future.’”

This means parents should protect children from having important life choices decided for them. Bossenberger, who does not yet have children, has nonetheless given some thought to the type of guidance she would offer.

“I would leave it up to them,” she said. “If I had a girl, I would maybe emphasize it more, suggest testing would be a good idea. But I think I would present it similarly to how my parents did.”

It’s a difficult conversation that is many years in the future, which brings Bossenberger hope through all the testing, scanning, watching, waiting—and worrying.

“Hopefully by the time my kid is grown up we’ll have so many more advancements in treating or detecting breast cancer that they won’t have to worry as much as I do,” she said.