Researchers are looking for signs of the disease in retina tissue 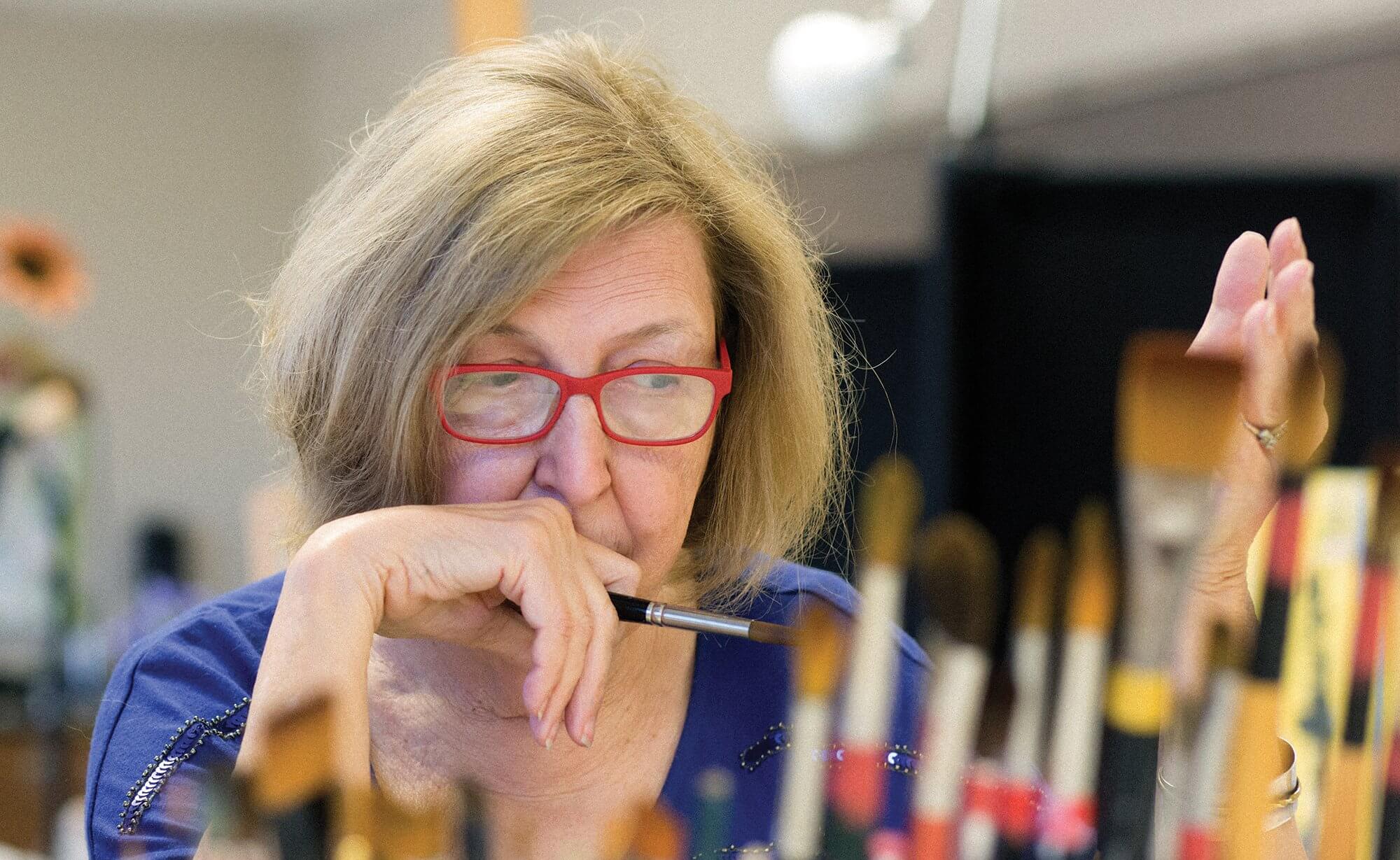 Sandra Devall stood by the window at Alvin Community College, looking for her husband’s pickup truck.

In her haste to get to watercolor class, she had left home without some of her art supplies.

“He doesn’t mind bringing them to me,” Devall said. “My husband is used to me calling about something that I’ve forgotten.”

Forgetting things has steadily become Devall’s norm since 2013, when she was diagnosed with early-onset Alzheimer’s disease. But taking watercolor class two days a week and being a master gardener help maintain her social engagement skills.

By the time she was officially diagnosed, Devall, 75, knew what was causing her memory deficiency. The retired graphic arts teacher at College of the Mainland had noticed the same symptoms while taking care of her mother, who also had Alzheimer’s.

Devall’s mother was diagnosed at age 70, two years after she had moved in with Devall and her husband following her own husband’s death.

“She had watched two sisters go through it, and I knew she was very afraid of having it,” Devall said. “Ironically, I don’t think she was ever aware she had it. She lived only two years after that.”

Prior to her mother’s diagnosis, Devall recalls not being able to pinpoint any symptoms that might have led them to think her mother had Alzheimer’s or the eventual multi infarct dementia caused by the disruption of blood flow to the brain. All she knew was whatever was going on was challenging for everyone in the household—herself, her husband and her mother.

“My mother had been such a kind, easygoing woman,” Devall said. “Now she was frightened, and she would not leave my side. By the time I got her to a doctor, it was obvious to him just being around her. I hated to talk about Alzheimer’s in front of her because, in her time, you just didn’t do that. But the doctor told me, ‘Sandra, look at her and tell me if you think she knows what we are talking about.’”

So four years ago, when Devall began forgetting things, she knew what her doctor was going to tell her.

Key could be early detection

Researchers at The University of Texas Medical Branch at Galveston are studying Alzheimer’s disease to determine what can be done to diagnose it earlier.

A recent UTMB study sheds light on how Alzheimer’s disease begins within the brain. Researchers found a relationship between inflammation, a toxic protein, and the onset of the disease.

They also identified a way that doctors can detect early signs of Alzheimer’s by looking at the backs of patients’ eyes. UTMB researchers have previously found evidence that tau oligomers, which are abundant in the central nervous system, may be present in the early stages of Alzheimer’s.

Brain cells depend on tau protein to form highways for the cells to receive nutrients and get rid of waste, said Rakez Kayed,Ph.D., an associate professor in UTMB’s department of neurology and one of the authors of the recent study. In some neurodegenerative diseases, including Alzheimer’s, the tau protein changes into a toxic form known as a tau oligomer and begins clumping into neurofibrillary tangles, he added.

“They cause havoc in a brain cell and are super toxic because the nervous system doesn’t recognize it,” Kayed said.

When those proteins stick together, molecular nutrients can no longer move to where they are needed, which leads to the eventual death of the brain cells.

In a paper published in the Journal of Alzheimer’s Disease, the authors provide evidence “that tau oligomers are present in the retina and are associated with inflammatory cells … These results suggest that there may be a toxic relationship between tau oligomers and inflammation.”

Imaging the brain for evidence of tau oligomers is a complicated procedure, but an eye exam is not, Kayed said. Researchers are also looking at tau levels in spinal fluid as an indicator of Alzheimer’s, he added.

“The problem with Alzheimer’s is that the genetic component is limited—a small number of people have genetic risk factors for the disease,” Kayed said. “If we could test spinal fluid, the eyes and eventually blood, it could tell us the best therapy.

If we do this early enough, we could possibly halt the progress of Alzheimer’s.”

Devall wishes an eye exam could have given her an earlier Alzheimer’s diagnosis, but she is hopeful that researchers will be able to help others with this discovery. She volunteers for Alzheimer’s research and testing at UTMB.

While there isn’t treatment to reverse memory loss and dementia, the effects of Alzheimer’s can be slowed with treatment and medication. Devall’s doctor, Erin Hommel, M.D., assistant professor of geriatrics at UTMB, said one of the most important treatments is regular physical and mental exercise.

Devall likes to give herself little tests everyday: While driving down the street, she will try to remember three things she sees. She also keeps in touch with loved ones and gets her extended family together at least once a year. She and her husband have six children, 10 grandchildren and 10 great-grandchildren.

“Patients are encouraged to complete advance directives while their mind remains sharp and decisional capacity is not affected,” Hommel said. “After discussing stages of disease, importance of exercise, safety and legal considerations, then we discuss options for medical treatment of the disease. There are a few medications that have been shown to slow memory decline. A choice to start medications is made after consideration of risks and benefits for each patient.

“Patients and their families may also be referred to community resources including electronic media to improve their understanding of the disease and to engage with others affected,” she added.

Devall likes to share her experiences with others in the same situation. She is a member of the Houston & Southeast Texas Chapter of the Alzheimer’s Association, where she often speaks publicly about her condition. UTMB is involved in the association, as well.

Now in her fourth year of watercolor class, Devall likes to paint memories. Her most recent project is a tree in her front yard. At a recent class, she worked on blending purples and blues and browns together to get the right shade for the trunk. With her teacher’s help, she painted the shadows of the tree limbs on the grass.

Pointing to a section of the tree where a limb connects to the trunk, she said: “Here is where my great-grandchildren like to sit. I am painting this because I want to remember that.”