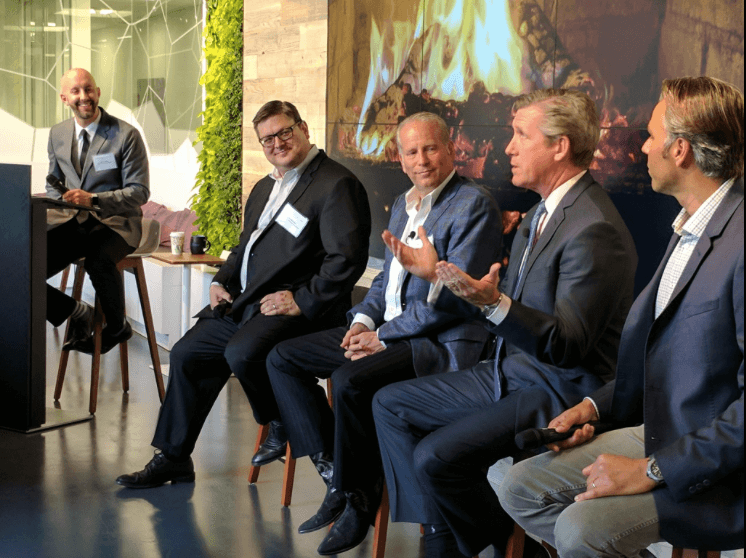 The fireplace in the background may have been simulated, but the chat that took place this week at Johnson & Johnson Innovation’s JLABS @ TMC was definitely on fire.

Medical devices are on top-of-mind lately, especially following the House of Representatives’ approval of the American Health Care Act (AHCA). A portion of the AHCA promises to do away with the medical device tax that was in the Affordable Care Act to offset health care costs. Opponents of the tax argue that it took funding away from research and development opportunities.

Whatever happens with the tax, putting new medical devices into the hands of physicians and patients is a goal for the Texas Medical Center and one of the reasons Johnson & Johnson is building the Center for Device Innovation on the TMC campus.

CDI @ TMC, which is slated to open in November, will bring in promising medical device entrepreneurs who will have the opportunity to get their products into hospitals, “… all without buying a single plane ticket,” Cohn said.

“Many ideas have been born in Houston only to disappear to the coasts while following venture capital,” McKeon said. “It’s difficult for venture capital to find all that we have to offer in one space, and we are all about people understanding the opportunities here.”

Desai, a relative newcomer to Houston, echoed that sentiment, saying people had told him Houston was making progress, and he wanted to see it himself.

“Those easy wins we see out of TMCx, JNJ and AT&T are going to bring everyone here,” he added.

When it came to advice for entrepreneurs, here’s what the experts had to say:

Mourlas: “Find a clinical need you are passionate about, because it is going to be a long and bumpy road. That will help you when you recruit team members and investors, because they will want to see that passion.”

Cohn: “Pick a project you are into, be manic when you describe it and drive it like you stole it.”

McKeon: “Starting a company is one of the most courageous things you can do. It is often a lonely experience, not just for you, but for your family and friends. It is a seven-day-a-week job and it all rises and falls on your spirit.”

Desai: “At the end of the day, it has to be all about the patient first.”