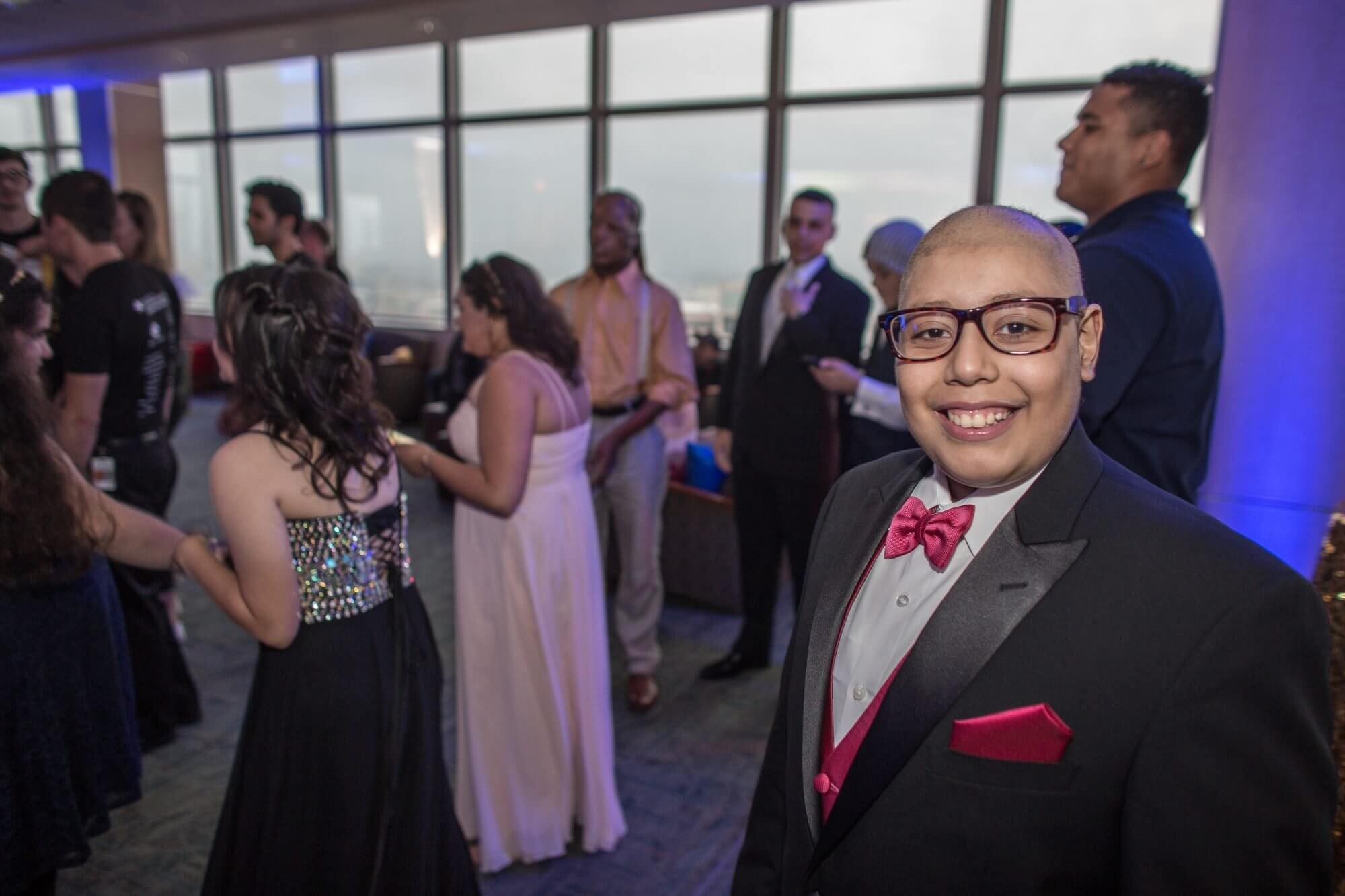 “I’m hoping that prom has some good food,” said the soft-spoken Roberto, who wears glasses with fashionably thick frames and identifies as an “old-style type of gamer” who loves Donkey Kong.

Roberto, 13, is a sixth-grader who is being treated for acute lymphoblastic leukemia (ALL).

“Every kid looks forward to their prom, and part of the sadness for these kids is they have to miss out on school activities,” said Thomas Nguyen, founder of Prom Party Palooza and chief marketing officer and partner at Houston’s Peli Peli restaurant. “We want them to feel as comfortable as possible. They can bring siblings, best friends.”

A few days before prom, Roberto and other attendees were fitted for tuxedos and gowns—donated by Al’s Formal Wear, Stage Stores and the community—at MD Anderson’s The Pavilion.

Roberto picked out a black tux with a hot pink vest. That vest promised to be a bright spot in a dark year.

In May 2016, Roberto was diagnosed with ALL, a type of blood cancer that occurs when abnormal white blood cells, known as lymphoblasts, accumulate in the bone marrow and spread to other organs, inhibiting the production of normal cells. ALL makes up the largest percentage of leukemia diagnoses in children under 15.

“When someone tells you your son has cancer, you think it’s the end of the tunnel,” said Dunia Sandhu, Roberto’s mother.

In the weeks leading up to his diagnosis, Roberto said he “started to feel tired. Super tired. Even when I woke up I was tired, light-headed and queasy.”

Sandhu shook her head when she recalled how hard she’d been on her son during that time. At first, when doctors didn’t think his symptoms amounted to anything serious, she had started to wonder: Was Roberto faking it? Was he saying he didn’t want to go to karate because he was lazy?

Once, he threw up on the carpet in the middle of the night.

“I did?” Roberto interjected, as he listened to his mother tell the story.

“And I was angry about the vomit on the carpet,” Sandhu said, wiping away tears.

Roberto is currently taking oral and intravenous chemotherapy, visiting MD Anderson for treatment once a week.

“In general, the current treatment for ALL is based on different blocks of chemo,” said Cesar Nunez, M.D., Roberto’s doctor and an associate professor in the Children’s Cancer Hospital at MD Anderson. “Each block uses different medication to systematically destroy leukemia cells.”

The diagnosis has changed Roberto’s life.

“Things that used to be fun for me were going outside, riding my bike, playing with my cousins, karate,” he explained. For now, though, most of his physical activities are suspended. His immune system is weak, thanks to the chemo, and doctors don’t want him to catch a cold or the flu.

Roberto used to attend Paul Revere Middle School, but now he is homeschooled.

“But I’m jolly,” Roberto said. “I make my days happy. Look at the bright side and turn your frown upside down.”

On prom night, Roberto wasn’t feeling well. From 3 to 6 p.m., as other teens came to pick up their formal wear, his tux waited on a hanger.

But the place was buzzing, as families mingled in The Pavilion. Pageboy, a Houston-based app that lets customers call stylists to their homes, set up a special salon for prom-goers. Jessica Taylor, 12, got her makeup done. Diagnosed with Ewing’s sarcoma two years ago, Jessica sported a close-cropped hairstyle and a short dress, bought originally for her brother’s wedding.

“She’s here in honor of her friend, Ashley, who passed away in March,” said Jessica’s mother, Kelly Taylor. “That was her buddy.”

Madisson Somero, 17, accessorized her white, strapless gown with a necklace from the Kendra Scott booth set up for prom, a black headband, false eyelashes and red high-top Chucks. At last year’s prom, she was in the first stages of her leukemia diagnosis and didn’t have much energy. This year, she said, she and her friend Brittni Lafollette—who wore white high-top Chucks with her prom dress—were ready to dance.

Sarah Whittaker, 21, who’s been under treatment for lupus for nine years, showed off her new manicure as boyfriend Travis Guillory, also 21, pushed her wheelchair. Sarah wore a sky blue dress that matched her nails, and Travis wore a dress, as well—a tailored brown garment that fell just below the knee.

“There weren’t any suits left,” he explained. “So I decided I wanted to be a princess to make her smile.”

Half an hour before prom was set to start, Roberto arrived with his mother, stepfather Rajinder Sandhu, and 5-year-old brother, David.

“I look good,” said David, sporting a vest and tie.

After posing for photos, Roberto’s family headed off to a special party for parents at The Park at MD Anderson, with food from several area restaurants.

“For a lot of the parents, it’s the first time they’re able to interact in a social setting with other parents going through the same thing,” Nguyen said. “A lot of parents don’t feel comfortable leaving their kids, so this is a great support system.”

Meanwhile, Roberto got into an elevator with others bound for prom and headed up to the observation deck on the 24th floor.

A wave of nausea swept over Roberto on the elevator.

“I don’t like taking chemo,” he said. The soft brown locks covering his head just days ago were gone.

When the elevator doors opened, he stepped onto a red carpet that led to the observatory, a room with tall windows on three sides and a panoramic view of Houston. J-Mac, a radio personality from 97.9 FM The Box, encouraged people to dance.

“Just move,” he told the crowd. “If you can’t move on the dance floor, move where you are. But you’ve got to move.”

Roberto stood off to the side, at one point ducking into another room to grab an ice cream. He didn’t know anyone, but he didn’t seem to mind. Several people came up to talk with him—other teens and volunteers.

Every prom has a life of the party. On this night, it was 14-year-old Mauricio Cordova, a ninth-grader who lives in Venezuela and comes to MD Anderson for leukemia treatments. Mauricio rocked a slouchy cap with his tux. He was the guy in the middle of the dance floor, surrounded by friends, mugging for a prom selfie.

Every prom also has a loner, someone who says little but sees everything. On this night, that was Roberto. Leaning against a window, slowly eating his pink and blue ice cream pop, he took it all in. The swirling lights. The sequined tablecloths and pillows. The kids in wheelchairs, on crutches, standing and dancing in groups.

Since his diagnosis, Roberto has grown a little bolder, a little more outgoing. After several songs, and with a little encouragement, he strode onto the dance floor, flashing a smile so wide it looked like he was hosting his own party.