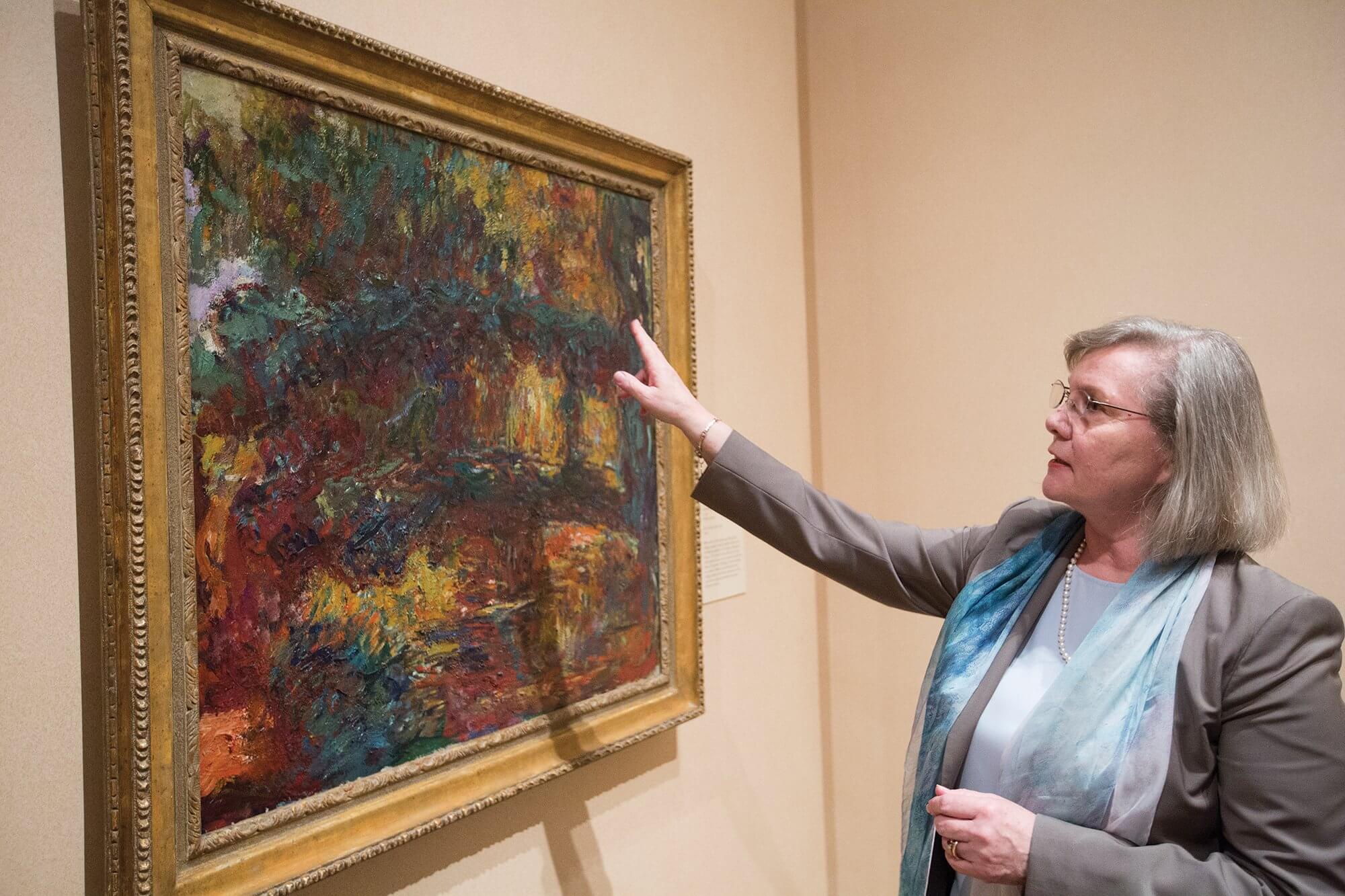 Claude Monet spent nearly every day outside, painting rivers, streams, trees, windmills, flowers, people, lily pads and the famous Japanese footbridge he built at his home in Giverny, France. The Impressionist painter returned to the same landscapes again and again, recording his perceptions of nature in bright colors and brief brushstrokes that emphasized light and movement.

But around 1912, when Monet was 72, he was diagnosed with cataracts, a clouding of the eye’s lens that alters perceptions of color and makes things look blurry or hazy.

For 10 years, Monet continued to paint as his eyesight deteriorated. Unable to read the labels on tubes of paint and no longer able to play with color the way he once had, the paintings he created during this period were markedly different than his earlier works.

One of these paintings—The Japanese Footbridge at Giverny, painted in 1922—is part of the permanent collection at the Museum of Fine Arts Houston (MFAH).

“It takes you a while to make out the shape of the Japanese footbridge, which he has painted so many times and you can so clearly see in many of his earlier paintings,” said Helga Aurisch, curator of European art at the MFAH. “Number one, it’s so dark and it’s very, very heavily painted. You can see it is standing up from the surface of the painting.”

Taken over by heavy strokes of orange, green, yellow, brown and red, this painting is more abstract, more severe than Monet’s earlier efforts.

Interestingly, the artist hung onto his pieces from this period.

“Monet, when he was dissatisfied with a canvas, he would throw it out and destroy it,” Aurisch said. “But these, he must have been, I don’t know, sort of fascinated by his own work in a way and he didn’t destroy them. He kept them.”

When first diagnosed with cataracts, Monet’s doctor recommended surgery. But the artist was reluctant to take any sort of risk with his vision.

“He starts complaining about his eyesight in 1912, but of course he doesn’t want to do anything about it because … it is as scary for Monet to become blind as it is for Beethoven to become deaf,” Aurisch said. “He thought it was from overstraining his eyes for so many years. He had looked into the sunlight hours and hours per day, painting virtually every day of his life.”

The MFAH has three Monet paintings in its permanent collection, housed in the Audrey Jones Beck Building. The Windmill on the Onbekende Gracht, Amsterdam, painted in 1874, renders the windmill and its reflection in vibrant colors and dappled brush-strokes. Water Lilies, painted in 1907, captures the light blues of the water reflecting the greens and pinks of the lily pads. The 1922 painting of the footbridge stands in stark contrast to both.

Monet never sold the 1922 painting. It was eventually sold by the heirs to his estate in the 1950s. Audrey Jones Beck was able to acquire it in 1976 and gave it to the MFAH, along with 73 other Impressionist paintings.

By late 1922, when Monet had nearly lost complete vision and was only able to perceive light in his right eye, he finally agreed to have surgery for his cataracts. With his eyesight greatly improved, he returned to painting and gave the nation of France eight of the largest-scale paintings he had ever done of his beloved water lilies.