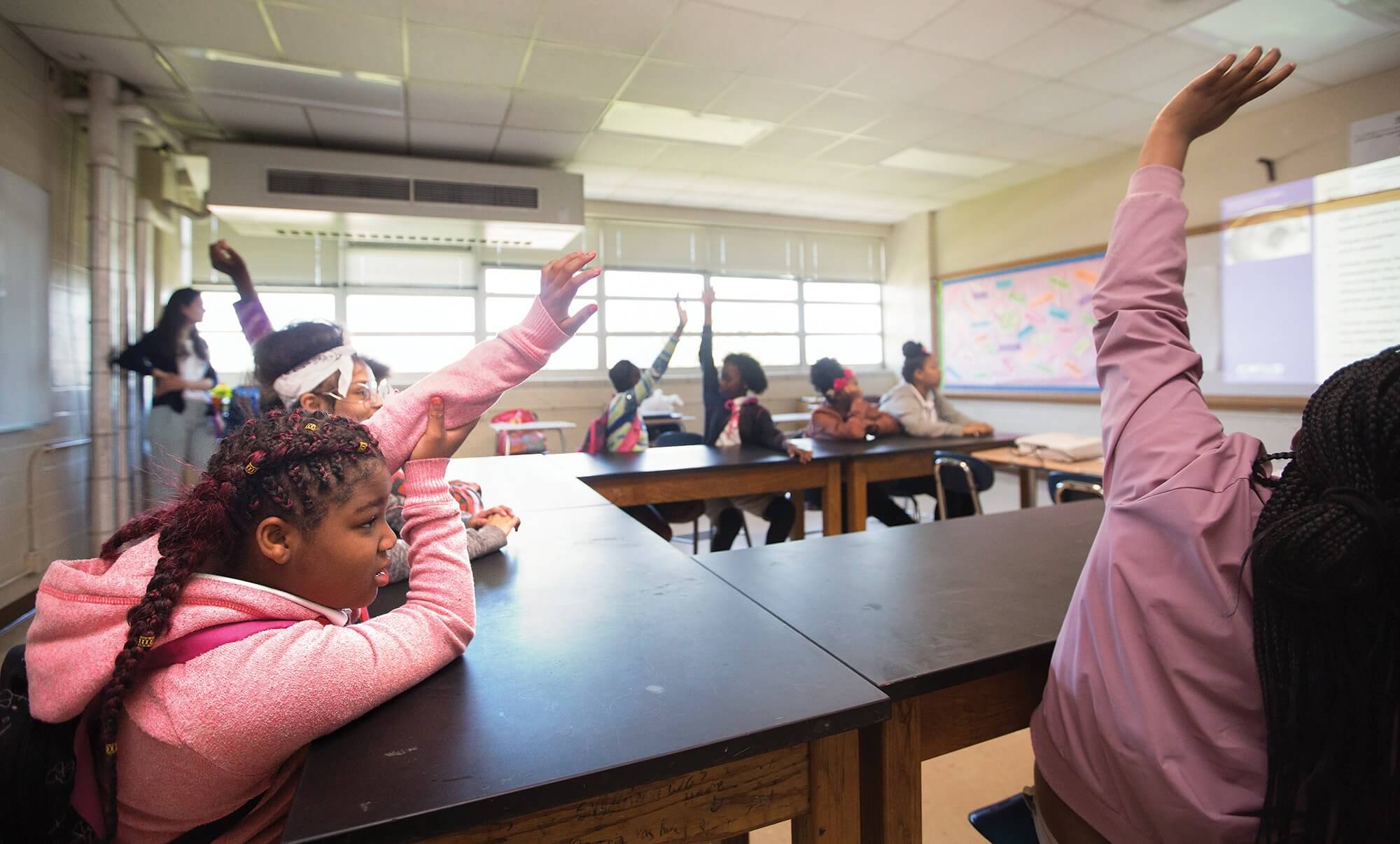 Twelve-year-old Kenya loves shopping, Beyoncé, dancing and all things purple. Like other sixth graders, she’s deep in the emotional turmoil that is middle school—frenemies, crushes, hormonal changes, academic pressures. The list goes on.

Kenya also faces broader challenges. She attends Francis Scott Key Middle School, located in the Kashmere Gardens section of northeast Houston, a low-income area with limited access to health care, transportation and youth facilities. For several years, Kashmere High School has failed to meet the state’s academic standards. Ten years ago, a study by Johns Hopkins University and the Associated Press called the school a “dropout factory,” because at least 40 percent of the freshman class didn’t make it to graduation.

Adeeb Barqawi realized that something had to change in the Kashmere community when he taught physics at Kashmere High through Teach for America.

“Many of these kids come from single-parent homes,” Barqawi said. “One parent might be in jail. We are dealing with high rates of teen pregnancies and some of the highest dropout rates in the country.”

In an effort to address these issues, Barqawi started ProUnitas, a nonprofit that helps provide essential services to students in the Kashmere community and promote success among students. This past spring, ProUnitas collaborated with The Menninger Clinic, a psychiatric hospital that treats adults and adolescents with complex mental illness, to launch BridgeUp at Menninger at Key Middle School.

“BridgeUp is focused on improving the mental health and well being of the community’s youth and, in particular, youth who are disadvantaged—coming from poverty, ethnic minorities that have already started out behind the eight ball,” said C. Edward Coffey, M.D., Menninger President and CEO.

In all, $1 million in BridgeUp at Menninger grants were awarded to seven recipients in Greater Houston to integrate social and emotional learning into the core curriculum for at-risk students. BridgeUp is part of a larger national program founded in New York City, funded by The David and Helen Gurley Brown Trust.

Barqawi and ProUnitas decided to not only implement the program at Kashmere High School, but also at Key Middle School, which has a population of approximately 700 sixth-, seventh- and eighth-graders.

“By having BridgeUp at the middle school, we are reaching students before their behavioral issues become a major problem,” said Angelica Edwards, ProUnitas linkage manager at Key Middle School and a licensed master social worker (LMSW). “This is the age where you don’t really know who you are yet … you’re experimenting. Should I hang with this crowd or that crowd? Your body is changing and you are really trying to figure out who you are. This is a very critical time. We get to the kids now, in middle school, so by the time they get to high school, they will be set and focused on who they are as a person.”

BridgeUp at Key Middle School works with students through a tiered system based on three risk factors: attendance, behavior and coursework. Tier One students are deemed the lowest risk; Tier Three students are considered the highest risk.

For the past year, Kenya and some of her classmates at Key Middle School have been attending the voluntary BridgeUp classes taught by Edwards, who works with Tier One and Tier Two students.

Students also see Edwards one-on-one for counseling, either voluntarily or as a result of a referral from a teacher or administrator.

The main goals of BridgeUp are to keep kids in school, teach them how to cope with conflicts that arise in school or at home, and, most importantly, succeed in life.

Although BridgeUp has been very helpful for Kenya, she still struggles.

“Last semester was kind of hard because my third period teacher always gives me zeros for no reason,” Kenya said. “In my other classes, they make learning fun. I love my reading class. We are reading a book called Monsters. It has been really fun because my reading teacher in first period gave us all different parts to read.”

“This boy had thrown a book at me and the teacher didn’t do nothing about it,” Kenya said. “So I defended myself and I hit him back. I was so scared because after that, he got all of his sisters that are in high school and they tried to jump me.”

When she returned from suspension, Kenya went to Edwards for advice.

“Kenya processes everything with me and she told me about what happened with the suspension,” Edwards said. “The girls this age like to play with the boys and then it turns serious, so I told her to not touch the boys and to distance herself from people who are not positive.”

At the end of the school year, Kenya will be moving to a different part of Houston to live with her mom. Although she is sad about leaving her friends and family at Key Middle School, she is looking forward to a fresh start.

“I feel sad about moving,” Kenya said. “When I think about it I start crying. But at my next school, I am going to choose the right friends to hang with and look for positive people like Ms. Edwards told me.”

BridgeUp is a new program, so administrators are still working out the kinks. In the two semesters BridgeUp has been operating at Key Middle School, Edwards and her ProUnitas team have experimented with holding the classes at different times during the day and on different days of the week to see which times work best for students and their families.

“This year there has been a lot of inconsistency because we are trying things and because I was new on campus,” Edwards said. “Now the students love coming to talk with me. … We have also seen referrals go down by 600 from the 2015-2016 school year.”