Can pigeons with backpacks help people with Alzheimer’s and dementia? 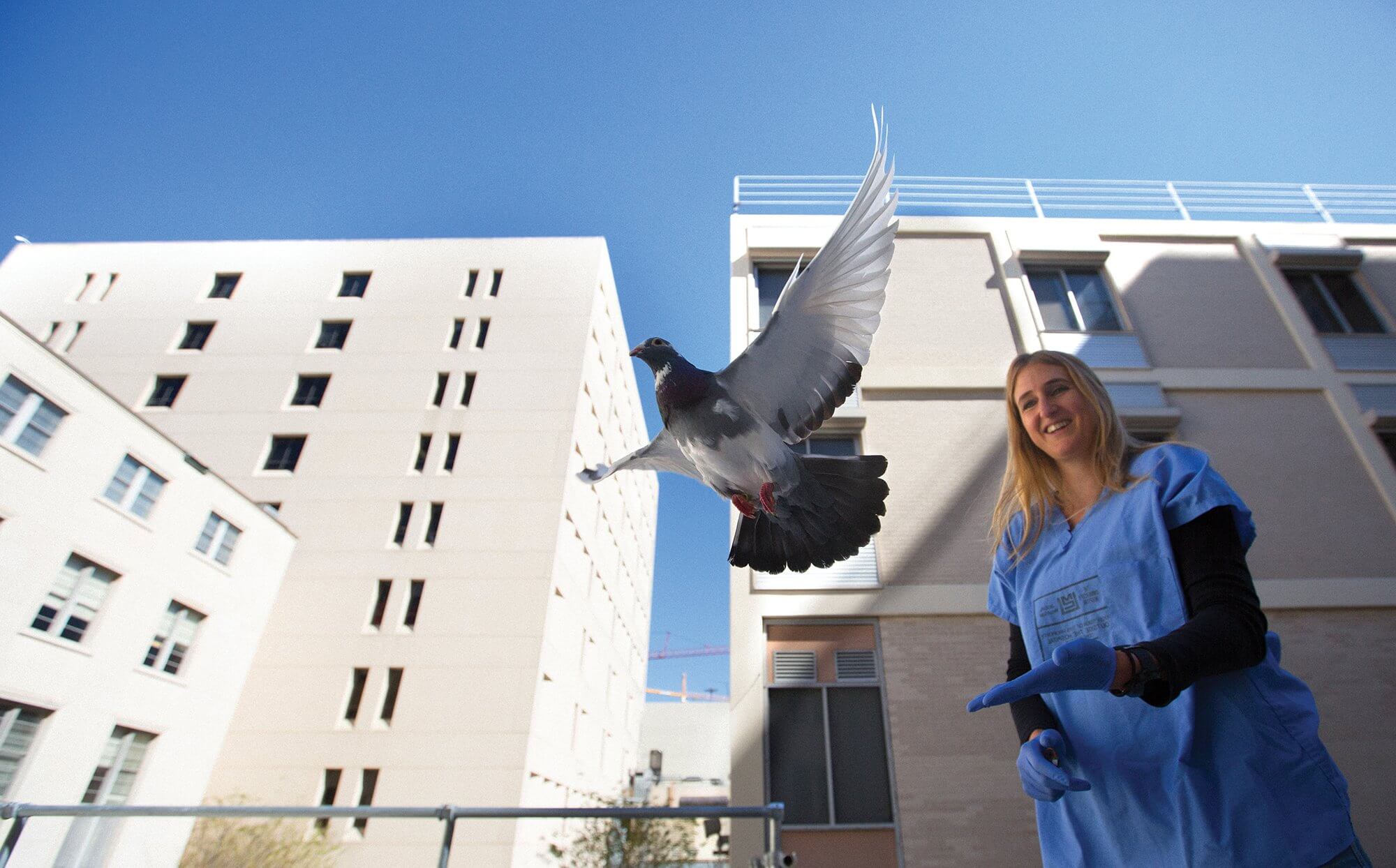 Nearly two dozen pigeons rustle their feathers and coo on the roof of the Services and Radiology Building at Baylor College of Medicine. They’re pecking at seeds in a 6-foot-by-6-foot wire den, dubbed the “pigeon penthouse.”

These birds are part of a research project led by Baylor postdoctoral associate Nele Lefeldt, Ph.D., who is studying their natural ability to navigate and orient using Earth’s magnetic field—a sense known as magnetoreception. Because birds have homing and navigational abilities that exceed human capabilities, studying the navigation circuit in their brains could lead to treatment options for diseases that affect orientation, such as dementia and Alzheimer’s.

“If we understand the basics that underlie orientation and navigation, we can get a better understanding in the long run of how to yield diseases and cure diseases that come along with disorientation,” Lefeldt said.

The navigation circuit is one of the least understood circuits in the brain, but it serves an important role, especially for people who suffer from brain diseases associated with older age. Disorientation is one of the first things to happen to people with dementia or Alzheimer’s.
“They get lost very easily,” said J. David Dickman, Ph.D., professor of neuroscience at Baylor, whose lab is hosting Lefeldt’s project. “Most of the Silver Alerts that you see on your way home on the highway are people who have gotten in their car and driven off and don’t know how to get back. People with these diseases … have to be followed all the time or somebody has to be with them.”

Earth’s magnetic field helps shield the planet from solar wind—charged particles from the sun that could deplete the ozone layer and expose Earth to high levels of ultraviolet radiation. However, the magnetic field also serves as a type of map that allows animals to migrate for thousands of miles and return home each year.

“Earth’s magnetic field has an inclination, the angle between the planet’s surface of the ground and the magnetic field lines,” Lefeldt explained. “This angle gets bigger or smaller, depending on which direction you go.”

Essentially, Earth’s magnetic field serves as a compass for animals, she said.

Previously, Dickman and his team studied the navigation circuit within the pigeons’ neural networks. Their research showed an increase in neural activity in the vestibular system, which regulates motion, equilibrium and spatial orientation; the thalamus, which is responsible for relaying sensory and motor signals; the hippocampus, which modulates memory and emotions; and the visual hyperpallium.

To collect data of her pigeons’ flight patterns and behaviors, Lefeldt fashioned small backpacks for each bird. Each handmade backpack is outfitted with a GPS tracking device and wireless transmitter that allows Lefeldt to track each bird’s exact location, position, direction, speed, acceleration and altitude from her smartphone. Most importantly, the device has a built-in magnetometer, which records what the magnetic field looks like wherever the bird is flying. Weighing about 20 grams, the backpack is not cumbersome for the birds to carry, but it can draw unwanted attention.

On one occasion, a pigeon landed on an office building in the Galleria and perched itself on a man’s windowsill to take in a bird’s-eye view of the city. Noticing the blinking light and assuming it was an improvised explosive device, the man called the police to report a potential bomb threat.

“Thankfully, our birds are tame, so the policeman could just pick him up and read my telephone number,” Lefeldt said. “I had to go down to the police station and get my arrested pigeon back.”

Lefeldt’s well-trained pigeons are taught to return home to their pigeon penthouse every day at 10 a.m. and 5 p.m. for breakfast and dinner. Because they were bred in the lab, Lefeldt was able to train them when they were very young. She blows a whistle at each feeding time, which the birds eventually come to associate with the time of day.

“Pigeons are actually very smart,” Lefeldt said. “When it’s close to 10 a.m., they are already sitting, waiting for their automatic feeder.”

After spending nearly six years with pigeons for her Ph.D. and now post-doctoral work, Lefeldt has grown quite fond of her feathered friends. She named her favorite pigeon Boomerang because he always comes back home after she releases him. Some are named after Greek gods and goddesses, including Aphrodite and Zeus, while others are named for philanthropists, like Bill and Melinda Gates. There are also Halloween-themed names: Salem, Wizard and Jack O’ Lantern. (When Lefeldt realized Jack was a female, she renamed her Jackie.) Recently, Lefeldt even tackled a 3-foot tall hawk that had wandered into the loft, to protect her pigeons from becoming dinner.

The next step in the research project will be to record brain activity during free flight. The birds will swap out their backpacks for tiny helmets designed to monitor their brains. According to Dickman, this will be the first ever research initiative to record the brain activity of an animal in the wild.

As home to one of the only active radical research pigeon lofts in the country, Baylor has partnered with SpikeGadgets, a San Francisco-based neuroscience device company, to serve as a beta test site for the company’s new neural recorder. The device, which weighs less than 2 grams, will be attached to the helmets and mounted on the birds’ heads to record the neural activity in the hippocampal brain circuit while in flight.

Once she and her team identify which part of the brain is involved, they can focus future research on that specific area to apply what they learn to treating human diseases.

“Hopefully, we can put together all the puzzle pieces,” Lefeldt said.