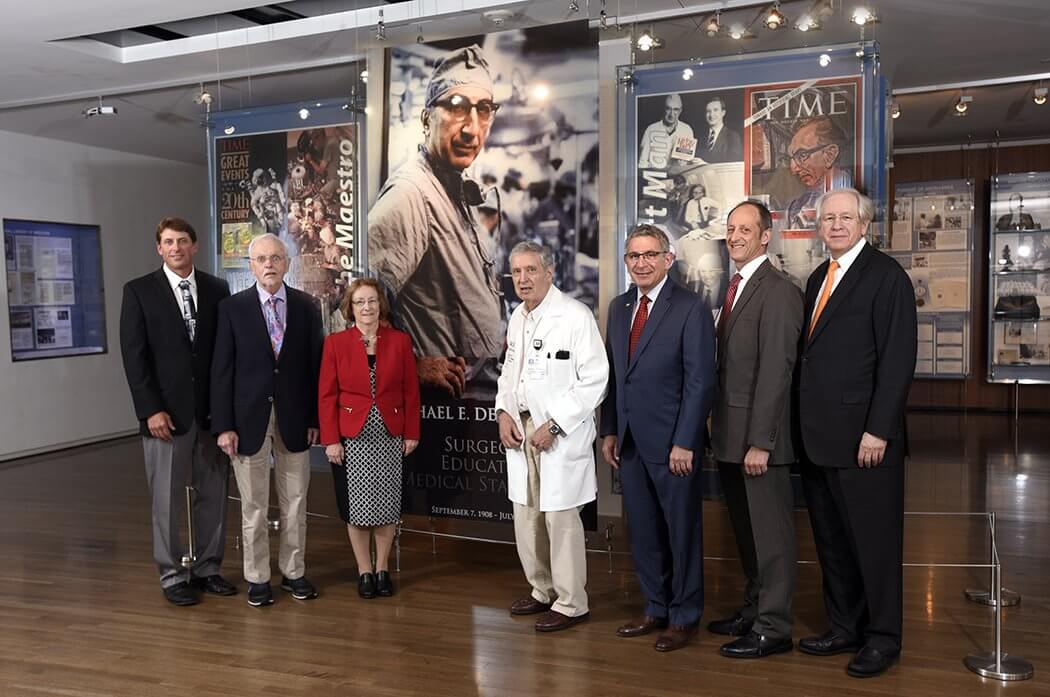 The recipients of the 2017 Michael E. DeBakey Award for Excellence in Research at Baylor College of Medicine exemplify the breadth and depth of research at the College. Their work has been identified as Baylor’s most significant published scientific contributions to clinical or basic research during the past three years.

The award, named in honor of the college’s first president and pioneering heart surgeon Dr. Michael DeBakey, was presented to the recipients at a ceremony and symposium May 15. Sponsored by the DeBakey Medical Foundation, it includes a commemorative medallion and funds to support further research.

“This is always an interesting and important event, because it gives us time to celebrate the outstanding scientists at our institution,” said Dr. Paul Klotman, president, CEO and executive dean of Baylor College of Medicine. “Dr. DeBakey encouraged excellence, and we are proud of the scientists being recognized here today for their contributions to science and research.”

Klotman presented the awards along with Dr. George Noon, professor of surgery and president of the DeBakey Medical Foundation. Dr. Adam Kuspa, senior vice president and dean of research at Baylor, introduced the awardees.

Dr. Benjamin Arenkiel, an associate professor of molecular and human genetics and neuroscience, has focused his research on improving our understanding of how the mammalian brain forms and maintains neural circuits. He recently described novel roles for neuropeptide signaling in synaptic remodeling within the adult mouse nervous system. In the area of circuit development, he discovered a new piece to the puzzle of how the brain organizes and processes information.

Dr. Joseph Coselli is professor of surgery and chief of cardiothoracic surgery. He has dedicated his career to optimizing the care of patients with life-threatening thoracoabdominal aortic aneurisms, or TAAAs, focusing on reducing the risk of neurological and renal complications following TAAA repair. In recent work, he was able to demonstrate the value of using left heart bypass to reduce the problem of inadequate organ blood supply and showed that cerebrospinal fluid drainage reduces the risk of spinal cord injury. He also has addressed the problem of renal complications for patients with this condition.

Dr. Mary Estes has concentrated her research on norovirus and rotavirus, the leading causes of food-borne gastroenteritis in children worldwide. She has reported the development of the first replication system for noroviruses, solving a nearly 50-year-old mystery and allowing researchers around the world to study the biology, pathogenesis and treatments against this major illness. Other highlights of her recent work include the development of virus-like particles that are currently being tested as norovirus candidate vaccine in phase II clinical trials and establishing a new model to study genetic susceptibility to rotavirus vaccines.

Dr. Bert O’Malley, professor of molecular and cell biology, has focused his research on the molecular mechanisms that guide gene regulation in endocrinology and endocrine cancers. His work has improved our understanding of the molecular mechanisms by which hormones, receptors and coactivators contribute to the disease process. Recent published research was the first to solve the structure of a functional receptor-coactivator complex on DNA capable of regulating gene transcription in vitro. Other work showed that small-molecule inhibitors that directly bind SRC-3 cause selective degradation of the complex, thereby killing cancer cells with no observable toxicity. Small-molecule inhibitors represent a new type of oncologic drugs that target coactivators.

Dr. Jordan Orange, professor of pediatrics and rheumatology, has concentrated his research on the study of primary immunodeficiency and on the cell biology and deficiencies of natural killer (NK) cell defenses, a major player in the rejection of tumors and viral infections. Recent work revealed an unexpected molecular link between a vesicular transport protein and a hereditary autoimmune-mediated lung disease and arthritis. Another paper was the culmination of a 12-year study to determine the cause of an NK deficiency that makes patients susceptible to severe viral infections. Orange also has moved forward our understanding of how NK cells kill their targets.