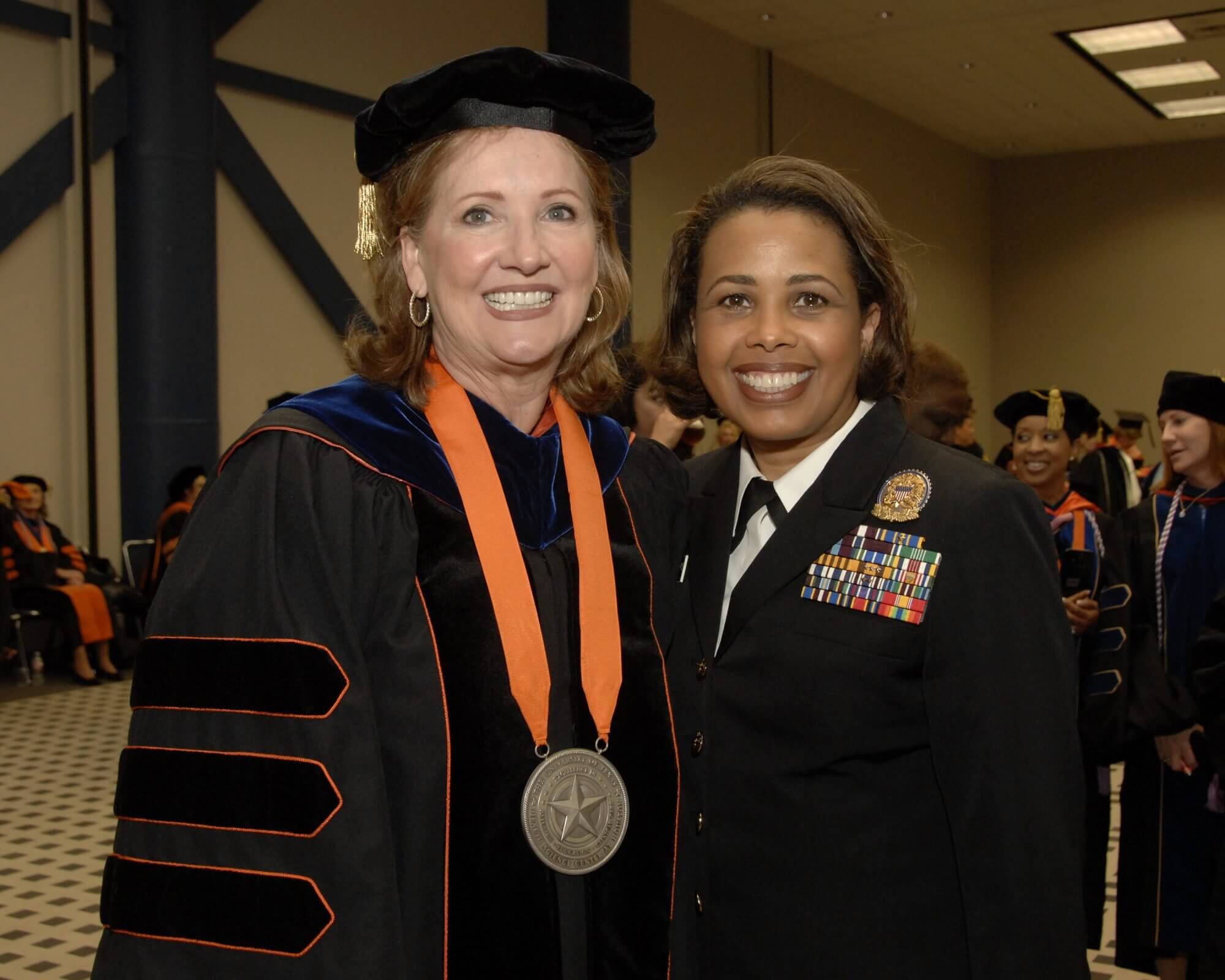 Describing nurses as the backbone of the health care industry, Acting U.S. Surgeon General Rear Admiral Sylvia Trent-Adams, Ph.D., R.N., challenged the almost 300 students earning degrees from the UTHealth School of Nursing to take their place at the table.

Trent-Adams delivered the commencement address at the school’s spring graduation ceremony on May 9 at the George R. Brown Convention Center in downtown Houston. The school has been educating nurses for 44 years and has awarded nearly 11,000 nursing degrees to its graduates.

Trent-Adams urged the new nurses to play active roles in the interprofessional health care teams that are tackling opioid abuse, chronic disease, suicide and the other major medical issues of the day.

“You need to take your place at the table where you are. You are the future of health care,” said Trent-Adams, who earned a nursing degree from Hampton University and started her career as a nurse officer in the U.S. Army.

“I wish I could tell you that the road will be easy. There will be times when you question your competence,” Trent-Adams said. “But, you would not be here if you were not made of the right stuff.”

Congratulating the graduates on their hard work and achievement, she noted that some who start nursing school find out that they are not cut out for this line of work. “But, you hung in there,” she said.

Trent-Adams told the nursing graduates that they were entering one of the most trusted professions in the United States as well as one of the largest in the health care field. “You need to be voice of the profession,” she said.

Patients look to nurses for a healing touch and a listening ear, according to Trent-Adams, who added that being present for patients in a time of need is important as well.

While it is vital to teach others how to take care of themselves, Trent-Adams told the new graduates they also need to make time for themselves.

Trent-Adams concluded her remarks with a quote from the late civil rights activist Booker T. Washington – “Excellence is to do a common thing in an uncommon way.”

Trent-Adams was introduced by Lorraine Frazier, Ph.D., R.N., dean of UTHealth School of Nursing, who told the gathering that every nursing school in the country would be honored to have the Acting Surgeon General as its commencement speaker.

Trent-Adams and Frazier were joined on the stage by UTHealth President and Alkek-Williams Distinguished Chair Giuseppe N. Colasurdo, M.D., who conferred the degrees to the students.

The Surgeon General provides Americans with the best scientific information available on how to improve their health and reduce the risk of illness and injury. The Surgeon General’s duties also include overseeing the U.S. Public Health Service Commissioned Corps, an elite group of more than 6,700 uniformed officer public health professionals.

Trent-Adams has held various positions in the U.S. Department of Health and Human Services, working to improve access to care for the poor and underserved. She has published many articles, participated in research studies and presented before organizations and professional groups.

Trent-Adams received an M.S.N. and Ph.D., from the University of Maryland. She became a Fellow in the American Academy of Nursing in 2014.

Before leaving the podium, Trent-Adams wished the students, “Much success and God’s speed.”