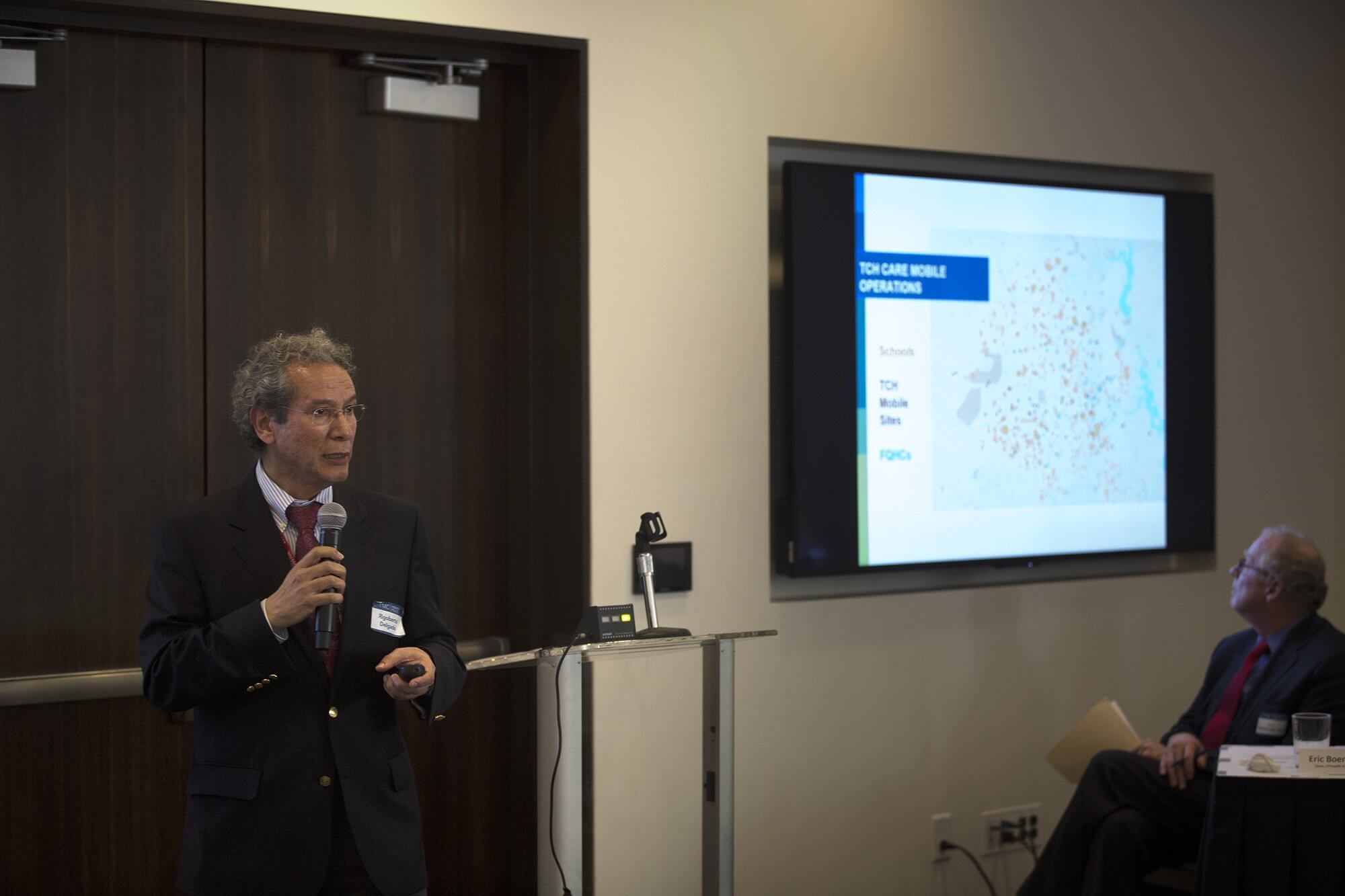 The Texas Medical Center Health Policy Institute hosted Tuesday evening a conversation between the inaugural winners of the Grant Program in Collaborative Health Policy Research and a panel of experts. Students, faculty, doctors, nurses and other members of the health care community attended the event where researchers presented the culmination of their yearlong research endeavors.

“This is the first time to my knowledge that this level of cooperation and sharing of data between med center institutions has occurred of that I’m aware of,” said Stephen L. Jones, M.D., assistant professor of clinical surgery at the Houston Methodist Institute for Academic Medicine and co-investigator on The TEXAS Project: Transitions Explored and Studied: Leveraging Data to Prevent Readmissions in the TMC. “It’s just been fantastic.”

Robert Phillips, M.D., Ph.D., professor of cardiology at the Institute for Academic Medicine and executive vice president and chief medical officer at Houston Methodist Hospital, served as the principal investigator for the TEXAS Project. He and his collaborators at The University of Texas Medical Branch, Baylor College of Medicine and Texas Children’s Hospital studied the burden of preventable readmissions on patients and the health system, an issue each of the TMC institutions faces.

“The reason this is so important is because, if you look at the literature that is out there now, and you look at the process that we have, it’s a huge mess. There’s almost no way to tell what works and what doesn’t work based on what’s there now,” Jones said. “We live in a constrained resource environment, where it is our duty to find what works and do that. We’re in the process of trying to build that evidence now.”

After studying readmission rates and processes at Houston Methodist and The University of Texas MD Anderson Cancer Center, the team of researchers utilized the data collected to identify the cost of follow-up calls to patients and develop a profile of the hospitals’ patient population to assess the risks of readmission.

Rigoberto Delgado, Ph.D., assistant professor of management, policy and community health at The University of Texas Health Science Center at Houston School of Public Health, led a group of researchers from the University of Houston, MD Anderson, The University of Texas Medical Branch and Texas Children’s to study the role of mobile clinics in providing health care to at-risk population in urban and rural areas.

“This funding allowed us a great opportunity to not only know what other people within my own school are doing, but also other institutions,” Delgado said.

Delgado and his team assessed various mobile health clinics—including those from UTHealth and Texas Children’s—to create model that optimized the deployment of resources and increased efficacy. For example, their research showed that Texas Children’s mobile clinics for vaccinations performed more than 9,000 vaccinations per year, covering a substantial 4 percent of the total student population in Houston.

Kenneth Smith, Ph.D., director of the Center to Eliminate Health Disparities and the Director of Community Development and Health Policy at UTMB, worked with researchers at the University of Houston, Texas Children’s and Baylor to study policies, agency practices and environmental factors associated with migrant health, focusing on children and families fleeing violence from Central America.

“Irrespective of why children are here from other countries and why they’re crossing the border, it’s important to remember that they are children,” Smith said. “Global displacement is a worldwide humanitarian and public health crisis, [with] 65 million people displaced on the planet as of 2015. Half of them are children.”

The results of their qualitative research showed that displacement in the Western Hemisphere has risen faster than other places in the planet, with most migrants being women and increasingly younger children. This profile, Smith said, is not typical of economic migrants and emphasizes the need for greater access to culturally and linguistically competent care.

Vivian Ho, Ph.D., director of the Center for Health and Biosciences at Rice University’s Baker Institute for Public Policy and professor in the Department of Economics at Rice University, led a team of researchers at UTHealth School of Public Health, Baylor and the Michael E. DeBakey Veterans Affairs Medical Center in studying how freestanding emergency departments in Texas relieve overcrowding in hospital emergency rooms and at what cost.

The research, which was recently published in the Annals of Emergency Medicine, assessed more than 16 million insurance claims through Blue Cross and Blue Shield of Texas between 2012 and 2015. The exponential growth of freestanding emergency departments in Texas has led to significant increases in out-of-pocket expenses for patients, she said.

After the groups presented the scope of their work and their findings, panelists Eric Boerwinkle, Ph.D., dean of The University of Texas Health Science Center at Houston School of Public Health; Marc Boom, M.D., president and CEO of the Houston Methodist Hospital System; and Paul Klotman, M.D., president, CEO and executive dean of Baylor College of Medicine, weighed in on each of the projects, providing feedback and recommendations for continued research.

“This is a program that requires collaboration,” he added. “We want three or more institutions to work with each other, which is something that is, hopefully, getting more common. We want folks to work together. We’ve seen lots of innovation and, I think, we’ll hear … that one of the outcomes of success is applying for more money.”

With the 2016 research initiatives completed, the Health Policy Institute is ramping up for the future. It recently announced this year’s grant winners and is already preparing to open applications for its 2018 cycle.