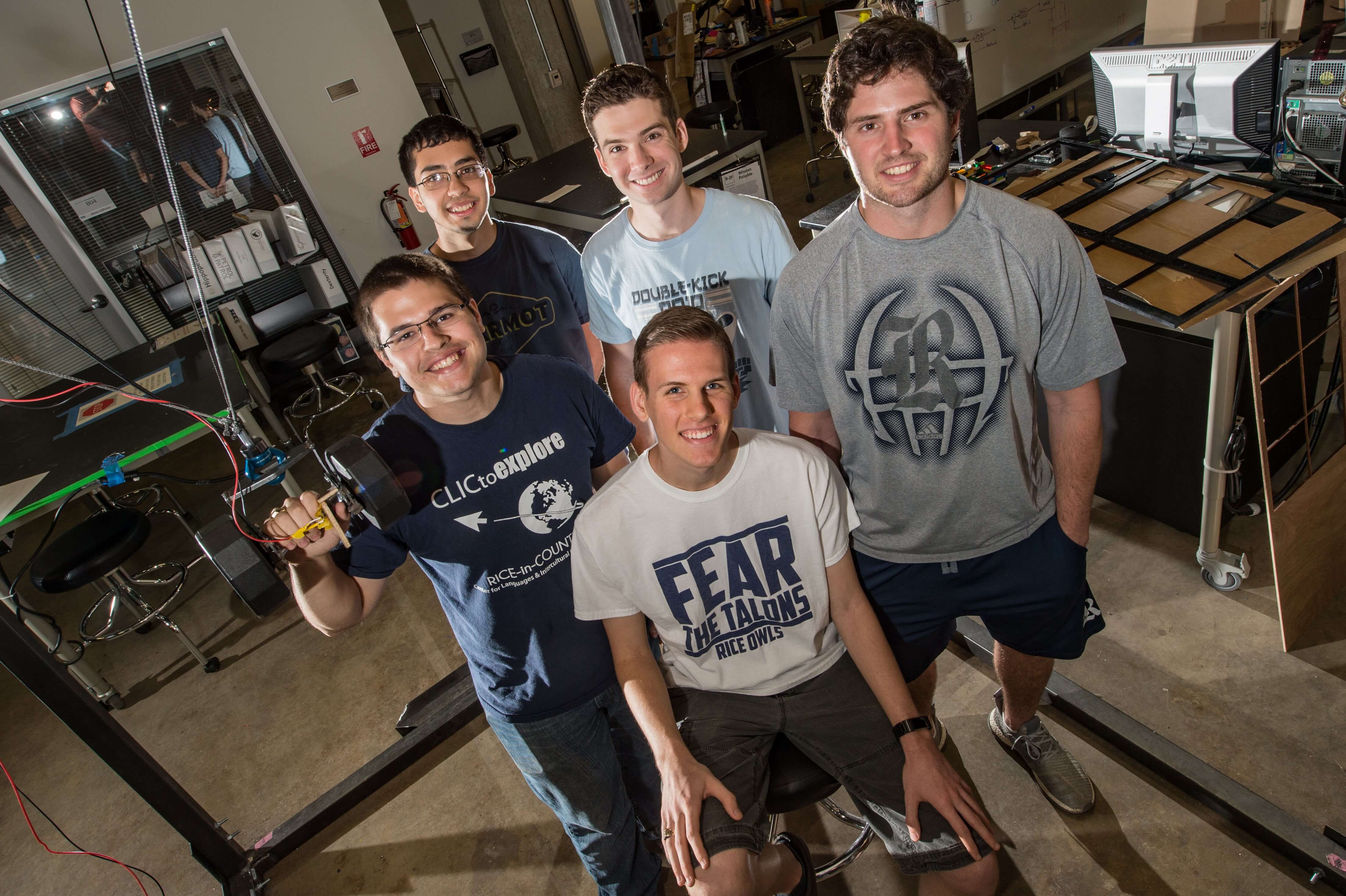 Rigging standard dumbbells to keep a user from getting hurt during a solo workout is pretty smart. So the Rice University students who invented the system call themselves “Smart Bells.”

Five senior mechanical engineering students developed a three-point ratcheting system that allows athletes to do all the work when lifting dumbbells, but stops them in space if, for any reason, the user releases his or her grip on the weight.

The Smart Bells team expects to demonstrate its self-spotting dumbbells at the George R. Brown School of Engineering Design Showcase April 13. More than 80 teams will vie for cash prizes at the annual event, which will be open to the public from 4:30 to 7 p.m. at Tudor Fieldhouse on the Rice campus.

The project came about at the request of the Rice Athletics Department, said Michael Groth, who built the device with fellow team members at the university’s Oshman Engineering Design Kitchen. “They wanted something that would allow athletes to exercise with heavy dumbbells and not worry about having a spotter there,” he said.

“You don’t need a whole bunch of these for a gym, just one or two,” said teammate Luke Daniels, who noted the standard dumbbells are interchangeable. “Rice athletes often have crazy schedules, with courses and meetings and labs, and when you need to go work out outside of practice, you might not have anyone with you at that time.”

“If you can’t complete an exercise, there’s a lot of potential for injury,” Groth added. “They wanted a device that could safely protect exercisers while still allowing for free range of motion, so they get the benefit of using stabilizer muscles that dumbbells give and resistance machines do not.”

Train engineers recognize the basic idea behind Smart Bells as a dead man’s switch that stops a locomotive when a handle is released. But the students who selected the project as their required senior capstone design looked to a few more accessible inspirations as well.

“The spotting mechanism was inspired by car seat belts, because they already use a mechanism that pulls a retracting cable in when you want it to, and can also lock the cable,” team member David Lipsey said. “Seat belts have a much smaller ratchet-and-pawl mechanism.”

“And we thought about ratcheting tie-downs, which allow us to pull something in and won’t let us pull back the other way,” Temo Tovar said. “The way to implement that is with a ratchet and pawl. But we needed a way to disengage the pawl whenever a person wanted to be free to do the exercise.”

That required the simultaneous activation of solenoids on each motor with an easy-to-grip button on the dumbbell handle. When the handle and button are released, the solenoids release the spring-loaded pawl back onto the ratchet, which instantly freezes the weight. “Having the ratchet means you can still push it up, but you can’t pull it down,” Tovar said.

The students also drew inspiration from cable systems that suspend stunt actors required to fly through scenes, Groth added. “They have a three- or four-point cable system that moves them,” he said. “Having multiple cables balances out the horizontal force. We realized it was OK to just use three.”

The students plan to have two dumbbells rigged and ready for demonstration at the showcase, he said.

“A full system will require two sets of three motors, one for each hand,” said Joe Ballard, also a linebacker for the Rice football team. “We want to have buttons for each dumbbell for symmetry. You don’t want it to feel one way in one hand and feel differently in the other because that may throw you off when you use dumbbells outside of this device.”