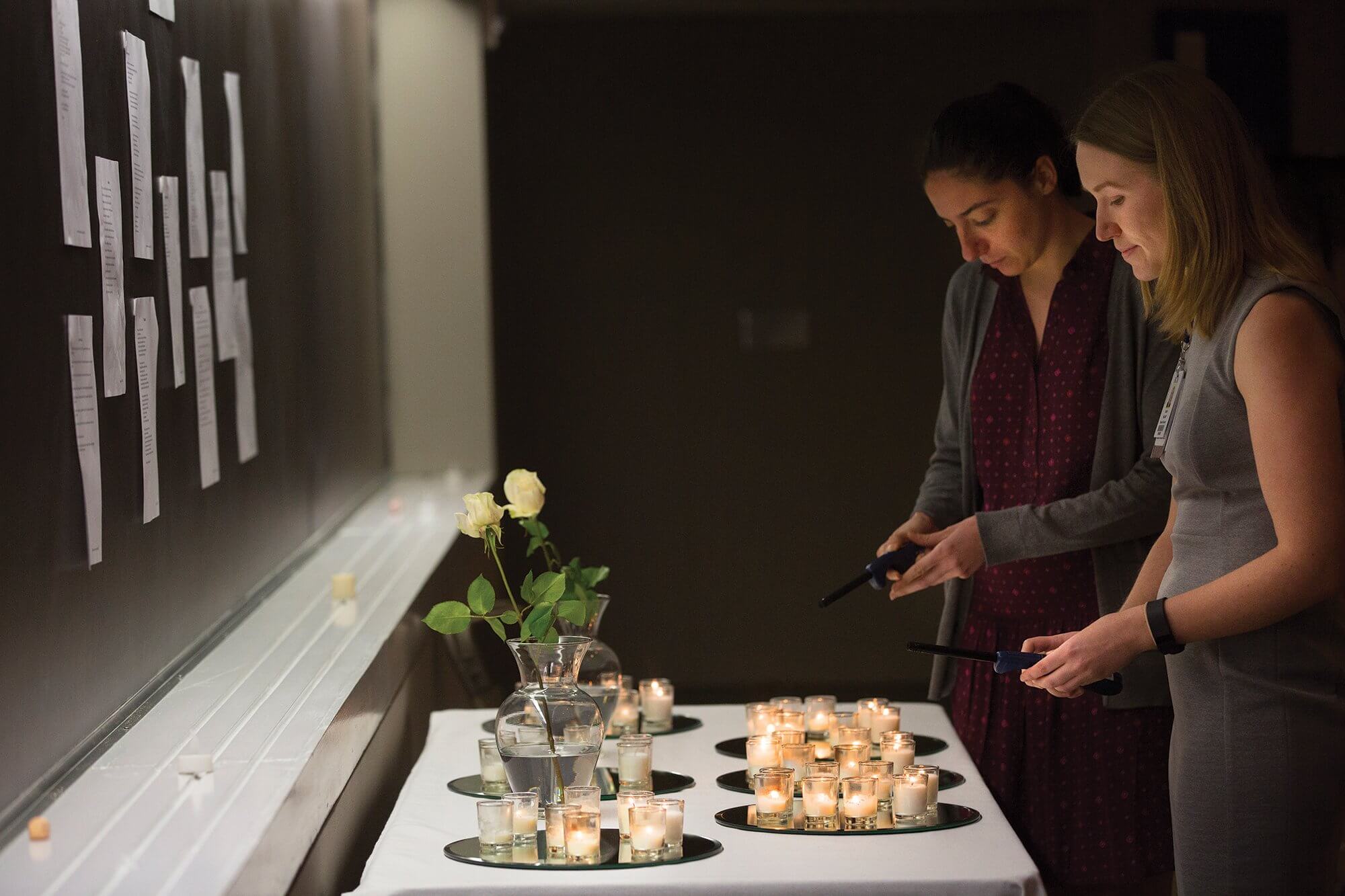 One of the rooms in the gross anatomy lab at Baylor College of Medicine houses 24 steel tanks. There, 24 “silent professors” await their class.

Last August, first-year medical students stepped into this cold, sterile room for the first time, the smell of formaldehyde embalming fluid lingering in the air. Entering this space is a rite of passage for medical students. It marks the beginning of the most important part of their training and, for many, their very first encounter with death.

“Even though we hadn’t filed into the room yet, I remember this sensation of thinking the room already felt very full because you could sense the aura,” recalled Sarah McGriff, a first-year medical student at Baylor. “Even though I hadn’t opened the tank yet, there were 24 people in this room already. There was that weight and sense of … aura. There are people in here, people who have had lives and things that happened before us that we can’t possibly know of.”

The bodies are donated through the school’s Willed Body Program, which oversees requests from individuals who wish to contribute their bodies to science. Since its inception in the 1940s, the program has received more than 11,000 donor bequests, averaging 100 donations each year for the sole purpose of helping educate future doctors, prosthetics and orthotics clinicians, nurse anesthetists, physician assistants and other allied health professionals.

Throughout their 30-week anatomy training, medical students attend lectures, memorize key terms and spend Tuesday mornings in the lab, where they use scalpels, forceps, probes and scissors to pick apart the intricate anatomical structure of the human body. Each lab starts with a “Kretzer moment,” an homage to the late Francis Kretzer, Ph.D., a beloved Baylor educator who instilled in his students a deep appreciation and respect for the donors.

Dissecting bodies can be an overwhelming experience that requires a certain level of desensitization and emotional detachment. But during the Kretzer moments, one student from the lab recoups a little bit of that humanity by reading a poem to thank and commemorate the donors for their generous service.

“Our donor housed a person, housed a soul,” McGriff said. “I became so attached to that.”

Meeting face-to-fascia
In the gross anatomy lab, donors are more than the students’ silent professors. They are the students’ first patients.

Their identities—names, ages and personal histories—are withheld from students, in order to protect their privacy. By the time the donors reach the gross anatomy lab, they have been assigned a serial number and a group of students.

McGriff’s donor was an older female, most likely in her 60s or 70s, who died of breast cancer. After McGriff and her team peeled back the towels that covered the body, they discovered that the donor was heavier set and average height, with a scar running down her abdomen from a previous surgical procedure. Her wrinkled skin had turned a greyish hue, with the slightest hint of purple and green, from the chemicals in the embalming fluid, but her nails still bore a pop of pink nail polish.

The stubble on her head, shaven from the cadaver preparation process, revealed vestiges of silver hair.

While other groups named their donors—names including “Al” and “Esther Rose”—McGriff and her all-female team couldn’t decide what to call their cadaver.

“We could all relate with every single part of her body and her experience. We just couldn’t think of a name that would encompass the whole thing,” McGriff said. “‘She’ and ‘her’ were such powerful words in and of themselves.”

Once acquainted, the dissections began. Each student picked up a scalpel, placed the blade on the cadaver’s skin and made the initial incisions. First, a vertical slit was made from between the shoulder blades, along the spine to the lower back, followed by a horizontal cut from one end of the shoulder to the other, to create a T-shape opening, intimately revealing the inner workings of the human body.

The technicality of the initial incisions is relatively easy, but it’s the emotional attachment that makes the process extremely uncomfortable.

“When you have to face death, you think of it as something that is fragile and fleeting,” McGriff said. “When I made that first incision, I was being so careful, not wanting to cut any deeper … and being so absolutely careful with everything because I didn’t want to hurt her, almost. I didn’t expect that to be as difficult as that was. Your cadaver is there for you to learn from, but at the same time, I was still thinking this was a real person.”

Over the weeks, the students carefully peeled back the skin, sliced through layers of fascia, navigated around different muscles and meticulously extracted the vast networks of nerves and
blood vessels.

McGriff and her tankmates even discovered remnants of breast cancer in their donor’s chest.

The cancer “probably defined how she and her family thought about the world,” McGriff said, recalling her own grandmother’s battle with breast cancer.

“It became something we could physically hold and touch. That, to me, was mind-boggling.”

The real deal
In recent years, medical schools around the country have considered eliminating the use of cadavers, citing time-consuming labs and high costs. New technology provides students with comprehensive and highly detailed medical atlases on tablets; 3-D software that can display every muscle, nerve and bone in the human body; and interactive virtual reality systems that provide medical training without spending hundreds of thousands of dollars on operating costs for cadaver dissections.

Furthermore, companies such as Tampa, Florida-based SynDaver Labs, can even manufacture lifelike “synthetic humans” to replace the use of cadavers in medical school training and surgical simulations. SynDaver Labs’ human anatomy models are realistic—complete with bones, joints, muscles, tendons and organs—and serve as a unique educational tool.

But traditionalists disagree with this new approach. While advanced computer tools and realistic models may save students time and medical schools money, curtailing the dissection experience will undoubtedly come at the expense of the students’ skill development.

“Despite the fact that there’s a lot of software that you can use to practice on, the reason you want to have an experienced surgeon is because they have experience not through a simulator,” said Shayan Izaddoost, M.D., Ph.D., chief of plastic surgery at Ben Taub Hospital, who matriculated at Baylor under Kretzer. “There’s so much of surgery that requires you to feel the tissue, know how it gives, know where each plane is based on feel and intuition. It’s very difficult to do that through a simulator.”

Working with cadavers also prepares students to cope with the emotional gravity of dealing with patients.

“There are so many intangible lessons that have nothing to do with the anatomy and that come from the gross anatomy lab for the students. It would just be a mistake to take it away,” said Sarah Blutt, Ph.D., Baylor associate professor of molecular virology and microbiology and former anatomy teaching assistant.

Eternal life
By the end of Baylor’s 30-week term, the first-year students had a chance to return to the gross anatomy lab to say thank you and bid farewell to their donors, placing a white rose in the tank along with the remains.

Alone in the lab, McGriff stood by her tank, preparing to say goodbye.

“It still felt like there was an aura there, but I didn’t have the same sort of nervousness I had when I first came in and it felt heavy,” she said. “It was more familiar to me and I was more comfortable with that weight.”

McGriff had written a poem and shared it with her donor during their final moment together.

“We gave so little in comparison to our donor, but we received so much,” McGriff said. “The first patient I see in clinic won’t be my first patient. It’ll be my second patient. Everything I have learned from my donor is something I want to honor and respect and bring that forward into my practice. The donor provided a service to us and it was a privilege to work with that donor just as it is a privilege to work with any patient and their family.”

The donors’ bodies can be used for up to three years in the gross anatomy lab. After that, Baylor cremates the bodies and returns them to families upon request.

It’s an emotional process, but the willed bodies are an “amazing gift” to the students and faculty, Blutt said.

“I’m so appreciative that even in death, these individuals are still giving,” she said. “They’ve left a piece of themselves with each one of the medical students, who are going to go on and heal people. In some views, that’s eternal life. You’re living forever through all the medical students, all the people they touch and all the people they teach.”