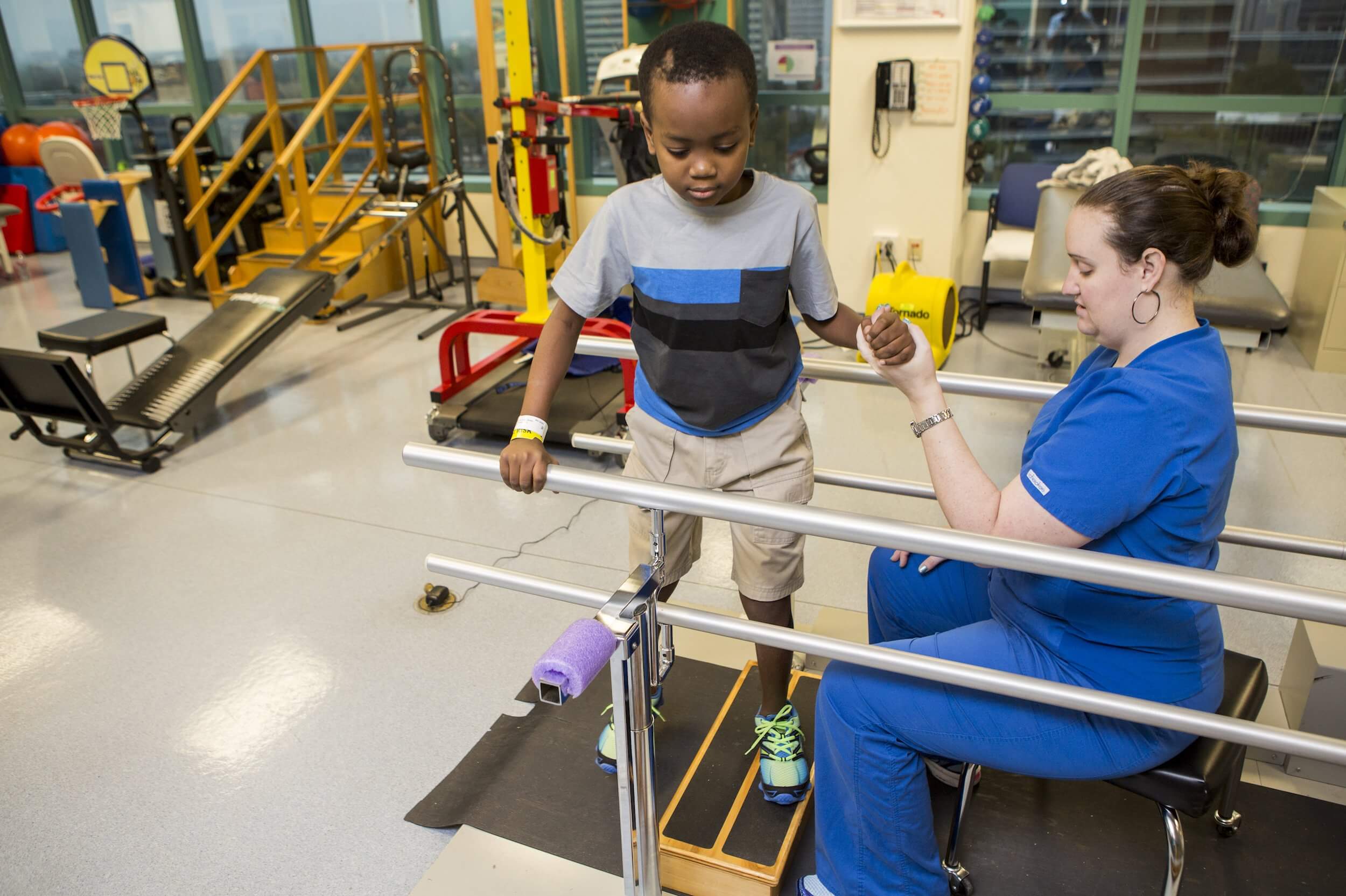 This trip was different. During the five days Sandberg and his team from Memorial Hermann were in Haiti, they met a young boy named Caleb. When Caleb and his mother, Bernita, came to the Bernard Mevs Hospital, Caleb’s brain had been swollen for almost a year and he was no longer able to walk.

Sandberg, who also serves as professor and director of pediatric neurosurgery at McGovern Medical School at UTHealth, realized Caleb was suffering from hydrocephalus—a buildup of fluid in the cavities deep within the brain—caused by a massive tumor in his brain. If left untreated, Caleb would die.

“Caleb’s tumor had reached a critical point, and it was causing severe pressure on his brainstem, which controls heart rate, blood pressure and breathing,” Sandberg said. “We treated the hydrocephalus with an endoscopic third ventriculostomy—a procedure where we go in with an endoscope and camera—and we made a hole in the membrane that bypassed the blockage,” Sandberg said. “We had to treat the hydrocephalus first, but he still would have died from the tumor had we not removed it, which had to be done in Houston.”

In March 2016, with the help of Children’s Memorial Hermann Hospital and a generous donor, Sandberg was able to bring Caleb and his mother to Houston to remove the tumor. In surgery, Sandberg removed 90 percent of the tumor that had been pressing on Caleb’s brain stem, impairing his vision and making him unable to walk.

In the time Sandberg has been part of this program, he has only brought three patients back to the United States.

“On each trip, I see about 50 to 60 patients, we do surgery on about 25 of them, and we are not looking to bring anyone to the United States—it is incredibly difficult and incredibly expensive,” Sandberg said. “The stars have to align for us to consider bringing someone back to the United States, and they did when we brought Caleb back.

After a successful surgery at Children’s Memorial Hermann and recovery at Shriners Hospital for Children—Houston, Caleb and Bernita returned to Haiti to fulfill Bernita’s hope of Caleb returning to school and resuming his regular activities.

In Jan. 2017, Sandberg and his team returned to Haiti for their annual mission trip and, of course, were eager to see Caleb.

“I absolutely wanted to see Caleb when we went back,” Sandberg said. “The small amount of the tumor we left on the brainstem in March of 2015 looked exactly the same on his 2016 CT scan as it had post-operatively in Houston, so it hadn’t grown or changed.”

Today, Caleb is up and moving again like his siblings and friends. Although most of Caleb’s life is back to normal, his vision is still impaired, but it is much improved from what it was when he met Sandberg. While Sandberg is very grateful he was able to help Caleb, he says there is still a lot of work to be done delivering health care to children in impoverished countries.

“I’ve done a lot of volunteer work internationally with neurosurgery and there are a lot of different ways of helping,” Sandberg said. “I wish we could bring every kid back to the United States, but we can’t—the hospitals here can’t afford it, it is a miracle for these children to have access to the amazing technology and care that we have here at our hospitals in Houston and in the United States, but it is an impractical solution. One way of helping is by providing surgeries on these mission trips, but the best thing that I think to do is to go down and train someone else to do these surgeries, and on this last trip I think we identified someone who can do this.”