Two Stories In One Act

Two Stories In One Act 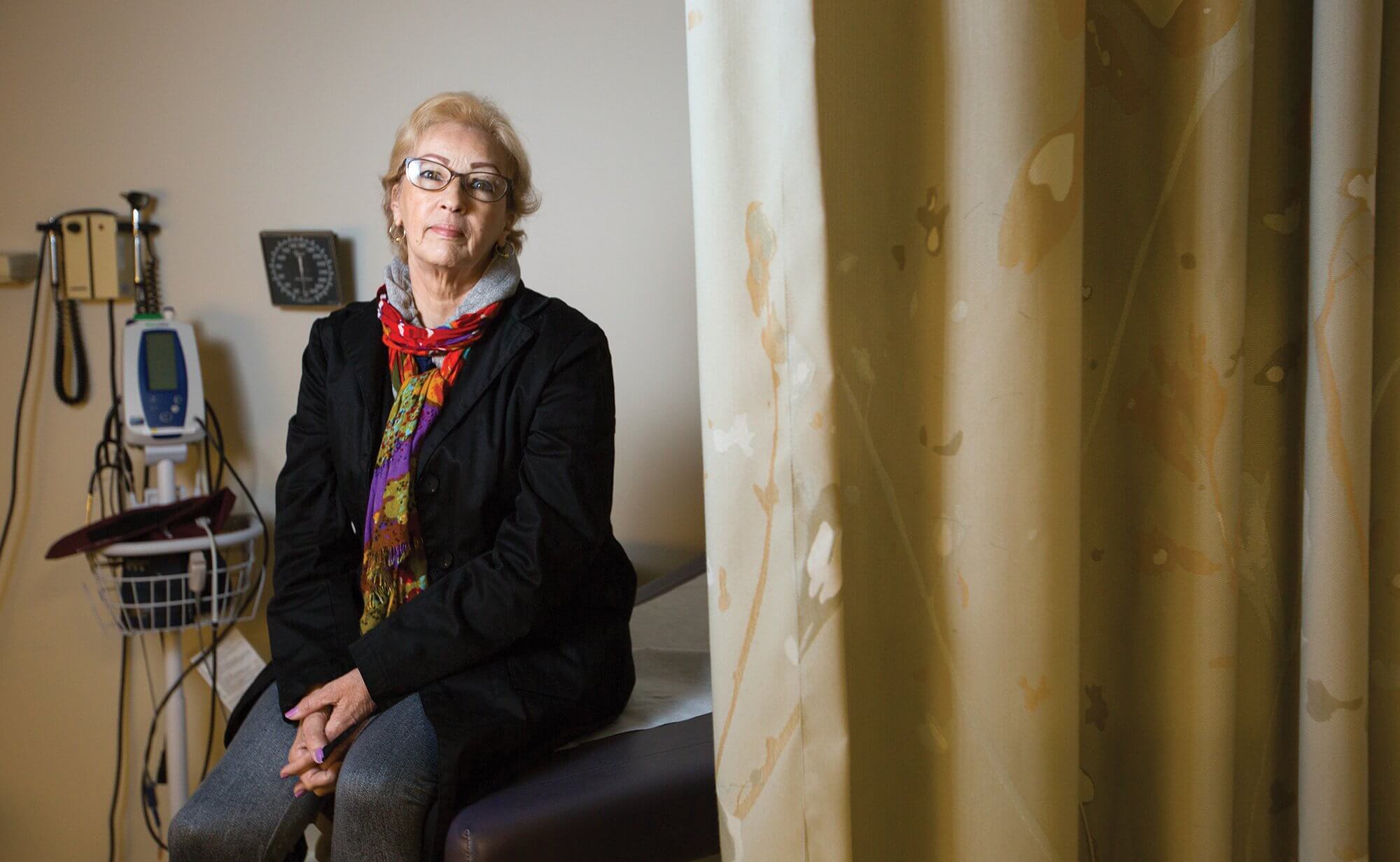 With the Affordable Care Act in the process of being repealed—or revised—Pulse offers two health care snapshots. Obamacare failed to help one patient, but the other found coverage for a pre-existing condition.

In the Coverage Gap

For the past year, Natalia Fuentes, 67, has been riding a health care roller coaster. Caught in a “coverage gap,” she is part of a group of uninsured, low-income adults living just above the federal poverty line.

Fuentes, who needs regular treatment for cataracts and glaucoma, has been unable to benefit from the Affordable Care Act (ACA).

Until last March, she received high-quality care at an affordable rate through Harris Health System.

But in a roundabout way, the ACA intervened.

Passed in 2010, and put into effect in 2014, the ACA included coverage expansion that extended Medicaid eligibility to greater numbers of low-income residents across the country. Individual states had the option to expand Medicaid coverage; those that opted in received additional federal funds. But Texas, home to more uninsured Americans than any other state, opted out of expanding Medicaid. As a result, many Texans were deprived of health care coverage, which led to higher costs and lower revenues for health care providers.

Last year, Harris Health System was forced to scale back coverage to its patients. Under the new program, households that exceed 150 percent of the federal poverty line no longer
qualify for discounts. Fuentes fell into that group.

“I felt terrible,” Fuentes said. “In a government office, how can you treat someone like that? … With the money I make, I know it is impossible, completely impossible, to pay for an MRI or surgery or a dentist.”

Fuentes was approved for Medicare Part B, but was unable to afford the premiums based on her monthly income.

“When I applied for Medicare, they wanted me to pay $140 per month and that only includes consultations—not prescriptions or surgeries,” she said. “I can’t afford that. The
rent on my apartment goes up every six months. How am I supposed to pay for things on top of $140? I can’t.”

Because her late husband served in the Vietnam War, Fuentes receives a pension from the Veteran’s Administration. Although it is not enough for her to afford the monthly Medicare premiums, she is exempt from the federal mandate to obtain insurance and did not owe a fee.

But she was in a bind. No longer able to attend regular medical appointments or see the doctors who had been treating her for the past decade, Fuentes scrambled to find health care.

“To me it is very important to have a regular doctor,” Fuentes said. “I feel like I am going blind because of my cataracts and glaucoma, and I need to have regular check-ups on my liver because I had Hepatitis C in the past. I was cured, but I still need to see a doctor.”

“It was a blessing,” Fuentes said. “It was my saving grace. I’ve been coming to San José since March 2016.”

At the clinic, Fuentes receives pri- mary care, dental care and specialty care. She is able to have lab work done, has access to a full pharmacy, and can be seen by optometrists.

“This clinic gives me help, but because of the money I make I have to pay $35 for a visit and $10 for medicine in the pharmacy,” Fuentes said. “But it is good. I am very happy with my doctor, Dr. Sherri Onyiego. … The only thing I don’t like is that there are many things this clinic doesn’t have. The eye doctor only comes once or twice a week, so the appointments are very late.”

Through volunteer support, community partnerships and generous donations, San José Clinic cares for many of the 150,000 Harris County residents who fall into the coverage gap.

“To me, the most important thing in life is respect in human beings,” Fuentes said. “I respect people when they respect me. And as a noble, peaceful person, I think that I deserve good health care.” —By Britni Riley

Caring For a Compromised Heart

Long-distance runner Rebecca Trahan was the embodiment of health. At 5’2″ and 108 pounds, she was in peak physical shape. The self-employed graphic designer and small business owner exercised religiously, maintained a clean diet, didn’t smoke and rarely drank alcohol.

In August 2011, just a few days after her 49th birthday, Trahan visited Denver, Colorado, where she spent a week at a horse camp. While she was driving to the Denver airport for her return flight to Houston, her vision suddenly blurred and she became overwhelmed with sweat and nausea. But she dismissed the symptoms, assuming they were precursors of a migraine.

“I pulled over to the side of the road to take my vascular inhibitor when a hippopotamus flew into the car and sat on my chest,” Trahan said, describing the crushing pressure she suddenly felt on her heart. “My jaw was numb, and my arms were numb, and just huge sweating, all of that. Classic symptoms of a heart problem, but I denied it all.”

The symptoms persisted for 45 minutes.

“I convinced myself, even though I didn’t believe it really happened, that it was a panic attack, because I had just run 15 miles with no problems,” Trahan said.

What Trahan experienced was neither a migraine nor a panic attack. It was a spontaneous dissection of the left main coronary artery, a rare and occasionally fatal condition. Trahan’s heart was collapsing.

Spontaneous coronary artery dissection—also referred to as SCAD—occurs when the inner lining of a coronary artery becomes loose, allowing blood to flow underneath and form a bubble. This obstructs blood flow to the heart, which can cause a heart attack, abnormal heart rhythm, or even sudden death. The exact causes of SCAD are unknown, but research indicates that patients are often healthy women with little to no risk factors for heart disease.

Instead of calling 911 or going to the hospital, Trahan continued down the freeway. She dropped off her rental car, caught her flight back home and continued with her usual workout regimen of running, boxing and lifting weights. But at 3 a.m. the following Tuesday, Aug. 30, Trahan awoke in another fit of agony.

With blurry vision and severe chest pain, she dragged herself to the bathroom, took some aspirin and went back to bed, counting her breaths and waiting for the pain to pass.

Later that afternoon she went to see her doctor. After her internist ran a few tests, the medical team told her she needed to be transported to St. Luke’s Hospital by ambulance.

“An ambulance? Are you kidding me? I can drive,” Trahan said, running the numbers in her head. “It’s going to cost a fortune.”

Trahan paid for her own insurance and was concerned about mounting medical costs.

“Rebecca, you fail to see the gravity of the situation,” her cardiologist said. “Your heart is barely beating. There’s no reason you should be alive.”

Up until that point, Trahan did not have a pre-existing condition. But after undergoing an emergency triple bypass to repair her heart, she would forever live with a compromised heart that requires medication and routine checkups.

Prior to the Affordable Care Act, Trahan and other patients could legally be denied insurance and specific treatments at any moment because of pre-existing conditions. But through the marketplace exchange created by the ACA, Trahan purchased an affordable Blue Cross Blue Shield plan in 2015 that covered all of her medical needs and allowed her to see specialists to treat her pre-existing condition.

Her condition improved and she went back to logging miles on the running track.

“The only thing that saved me was that there was a non-pre-existing clause,” Trahan, now 54, said.

Although her monthly bill of nearly $700 was expensive, she was still able to get the health care she needed without the risk of being turned away. She considers herself a success story of the ACA, but she was only able to enjoy the comprehensive health care plan for a year before a host of insurers pulled out of the Texas market in 2016. Those that remained upped their rates.

Trahan was offered a more expensive HMO with Blue Cross Blue Shield that came with a monthly cost of nearly $1,000, a higher copay and far less coverage. She opted, instead, for a community health plan that still restricted her to local physicians and limited coverage.