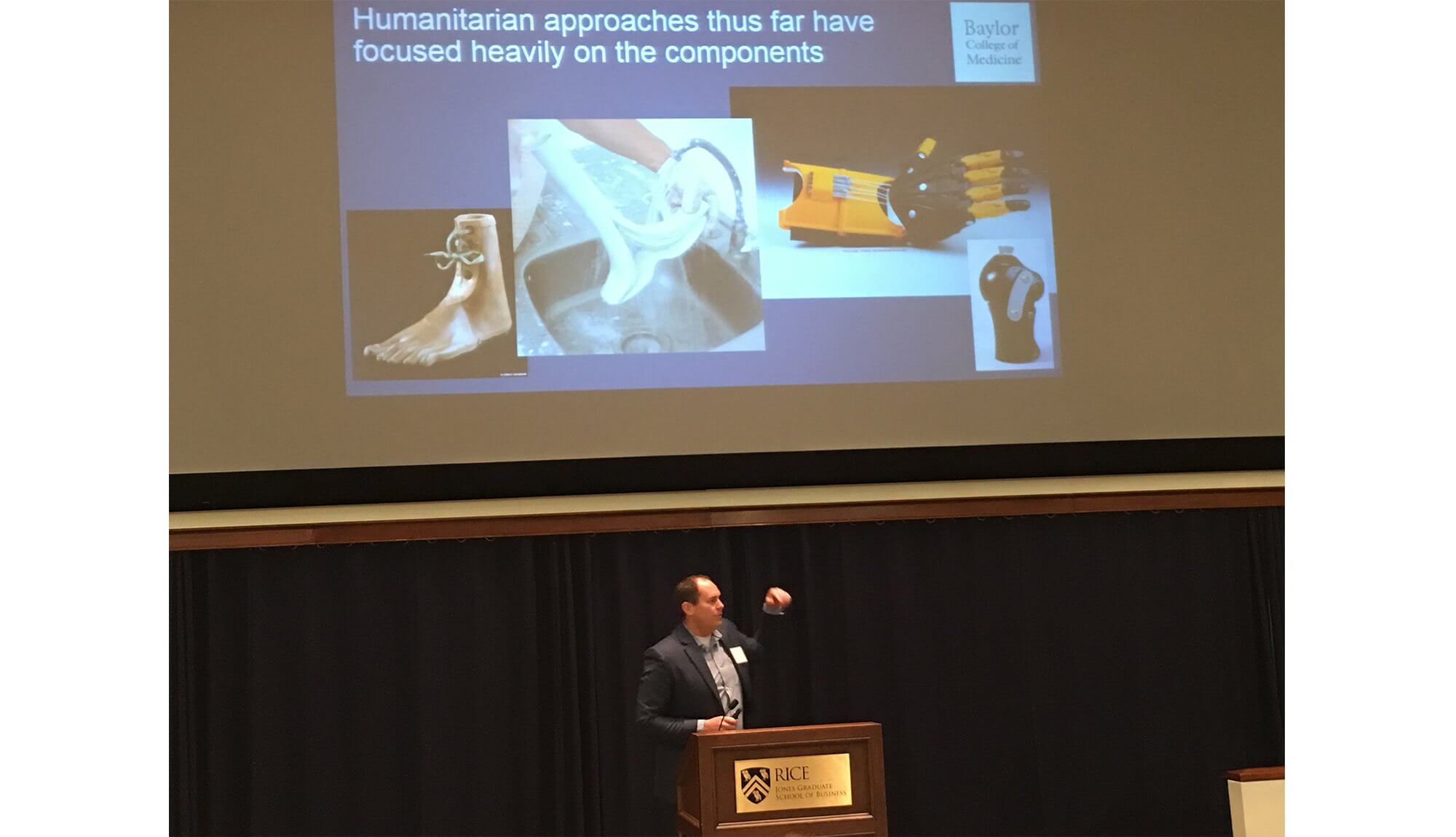 This year’s topic, Sustain 2017, ran from March 23–25 and covered a wide range of topics focused on global health research, humanitarian initiatives and prevention efforts in alignment with the United Nations’ sustainable development goals.

The Houston Global Health Collaborative was founded in 2012 by Pettitt and two other students, Michael Goodman and Eric Crowell, M.D., who sought to create an organization that promoted and connected people from the TMC who were interested and involved in global health.

“When I arrived in Houston, I thought it was great that we had the world’s largest medical center, and there were a lot of faculty and students doing global health work around the world, but there was really no cohesion,” Pettitt, senior project coordinator for Baylor International Pediatric AIDS Initiative (BIPAI) and this year’s pre-conference chair. “There was no organization or group that was coordinating these efforts. Everyone was really working in silos and probably duplicating a lot of efforts. Some other students were noticing it too, so we got together and said, ‘If the faculty and the Texas Medical Center aren’t coordinating these efforts, let’s see what we can do as students.’”

As a student-led and student-focused initiative, the HGHC aims to emphasize student scholarship and involvement.

“We wanted to make sure that the students are hearing from leaders who are in these fields and that they’re relaying information that will help students in their career paths, as well as their current academic studies, finding ways for them to get involved now as students and in the future when they finish their academic programs,” Pettitt said.

In addition to providing students with the opportunity to learn and participate in global health projects, the HGHC was designed to help foster cross-institutional collaboration among experts who attended the conferences, creating a breeding ground partnerships and new ideas.

“That’s really what we wanted to do in the beginning: have a forum for all of the folks in the medical center working on global health issues to meet, discuss, network, find synergies and make sure the students benefit from what’s going on,” Pettitt said.

While previous HGHC conferences have been 1.5 days in length, Texas Children’s Hospital Global Health Initiative sponsored a pre-conference this year focused on maternal-fetal health around the world, extending the length of the full conference to three days.

The conference featured presentations from experts to discuss topics, such as sustainable partnerships, lessons from the field, IT management, reducing health disparities, energy, innovation and technology.

As the conference evolved over the years, the emphasis on innovation and technology, Pettitt said, is a recent addition to their conference because of the wave of collaborative efforts—including Baylor Global Health Initiatives, Rice 360 and the TMC Innovation Institute—to solve global health problems for vulnerable populations.

“When we started this initiative in 2012, that was around the same time Dr. Bobby Robbins came on board as the president and CEO of the Texas Medical Center,” Pettitt said. “He brought a sea change to the TMC, taking it from essentially a real estate and parking business to something that really finds ways to facilitate collaboration among the different TMC institutions. … That has also brought a huge change to the approach of the TMC to collaboration, especially around innovation and technology and really putting Houston on the map for medical innovation startups, which, when you connect it with Rice 360 and their biotechnology for global health, can help us develop technologies and systems in the global health arena.”

One of the hot button issues the conference also touched on was funding. President Donald Trump’s recent budget proposal would cut federal spending on programs dealing with international issues, such as the U.S. Agency for International Development (USAID), U.S. Trade and Development Agency, the Fogarty International Center at the National Institutes of Health for global health research and training, and the United Nations. The news of the Trump administration’s proposed cuts is enough to raise concerns in the global health community, but Pettitt and Mizwa remain optimistic.

“Global health has always had to deal with limited budgets, having to advocate for the survival of programs, having to make sure we are active in the political process to advocate for needed interventions, so it’s really nothing new,” Pettitt said. “It’s not just an issue in the U.S. It’s an issue all over the world. Most countries invest far less than the U.S. in global health efforts or event their own local health systems.”

For Mizwa, if federal funding is curtailed, global health organizations will need to consider a combination of public-private partnerships for support.

Earlier this year, Texas Children’s and BIPAI announced a $100 million partnership with Bristol-Myers Squibb to launch the first comprehensive pediatric hematology-oncology initiative to treat children with cancer and blood disorders in sub-Saharan Africa.

“Private philanthropy might be one of the areas that we’ll have to be looking at to bridge the gap if there is going to be reductions under the new administration,” Mizwa said. “But we’re all highly motivated and fully inspired, as most people are in the global health world, to figure it out.”