When Claudius Conrad, M.D., Ph.D. operates on a patient, his fingers tease and coax the tissue with precision and grace.

To the outside world, the surgical oncologist is performing advanced laparoscopic surgeries for patients with complex diseases of the liver and pancreas. But to Conrad, a classically-trained pianist who calls himself a “musical surgeon and a surgical musician,” every appearance in the operating theater is a chance to make art, to perform a magnum opus.

“I didn’t choose surgery,” said the German-born doctor. “Surgery chose me. In my mind, the similarities between being a pianist and being a surgeon are so strong. Sometimes I cannot even distinguish them. A concert performance and a challenging case in the operating theater—it’s almost the same in my mind.”

Conrad grew up outside of Munich in an academic family. His father was a nephrologist and veterinarian, and his mother was a biomechanical engineer. Although neither of his parents were musically trained, they kept a grand piano in their home. By the time Conrad was 5 years old, his body and soul were drawn to the instrument.

“I always wanted to touch it and play with it, but my parents were like, ‘No, you’ll mess it up!’” Conrad said. “When I finally was allowed to play, it was almost like a relief.”

He pursued his passion for piano, training at prestigious music schools across Europe and competing at numerous piano competitions as a solo and accompanying pianist.

He qualified for a high level of a national music competition, but at that time he was fulfilling his military duty as a sniper for the German special forces mountain corps, training in the Arctic Circle.

“I asked my commander, ‘Can I please return to Germany with the support plane to fly back to compete?’” Conrad recalled. “The commander said, ‘Are you kidding? Yeah, you’re drafted. You’re in the military. This is your job now. Forget about that.’”

Although Conrad didn’t get to compete then, he still considered a career as a full-time professional pianist. However, a piano professor encouraged him to explore his other passions before making a decision.

“I always liked helping people, so I started to study medicine and music at the same time,” Conrad said. “I thought I would decide by studying, but I couldn’t, so I just continued studying both until I graduated.”

His chronic indecision led him to earn his first Ph.D. in stem cell biology and a second Ph.D. in music philosophy from the University of Munich. 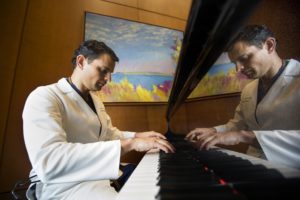 Today, Conrad’s love for music and passion for surgery are inextricably entwined. He uses the same techniques whether he’s performing a complex surgical procedure on a patient in the operating theater or performing Frédéric Chopin’s Polonaise in A-flat major, Op. 53, in front of thousands of spectators.

“When you have a challenging situation in the operating room where you have bleeding and an emergency, you’re in a lot of stress,” he said. “But that is the moment when you want to be most relaxed, the most sensitive to the feedback the tissue gives you in order to save the patient’s life. It is very similar to a concert performance where you want to make the most beautiful music when you are onstage under stress. It’s about … being able to take a step back and control your breathing, control your heart rate and be very focused.”

To become an effective, ambidextrous surgeon, Conrad modified his daily routine. For example, he brushes his teeth with his left hand in the morning and alternates wrists for his watch every other day. In his current role as a teacher of surgery, he gives the assistant the optimal position at the operating table. Conrad stands on the opposite side of the table and uses his non-dominant hand to perform procedures.

“If you have to always position your body so that your right hand engages, No. 1 the dissection will not be as high quality, and, No. 2, I don’t think it’s good for your body,” he said.

“When you look at an X-ray, to some people, it’s just shades of black and white, but it’s the deeper meaning that’s within there,” he said. “When I look at music, I hear it in my head. I think about how I’m going to play it. I think about the phrasing. … I think about possible imagery; it should sound like sun breaking through the clouds.”

Conrad listens to music while he operates. In a recent paper he and his colleagues published, they showed that music in the operating room can help to improve team dynamics.

“We know that anesthesiologists—part of their job description is to follow auditory encoded information (including alarms)—like so-called ‘reflective’ music, like classical music or jazz music,” he said. “Surgeons, who have to execute prolonged motor performance, often enjoy so-called ‘activating’ music. Classical music can be a good common denominator for an OR team.”

Whether he’s listening to Bach on his bike ride to work, performing surgery to Mozart or playing Chopin from memory on his piano at home after a long day, Conrad’s love for music is an essential part of his daily life.

“Music has such an important role,” he said. “It touches us so deeply without physically doing anything to us. It’s so interesting to me that soundwaves can create this very strong experience.”