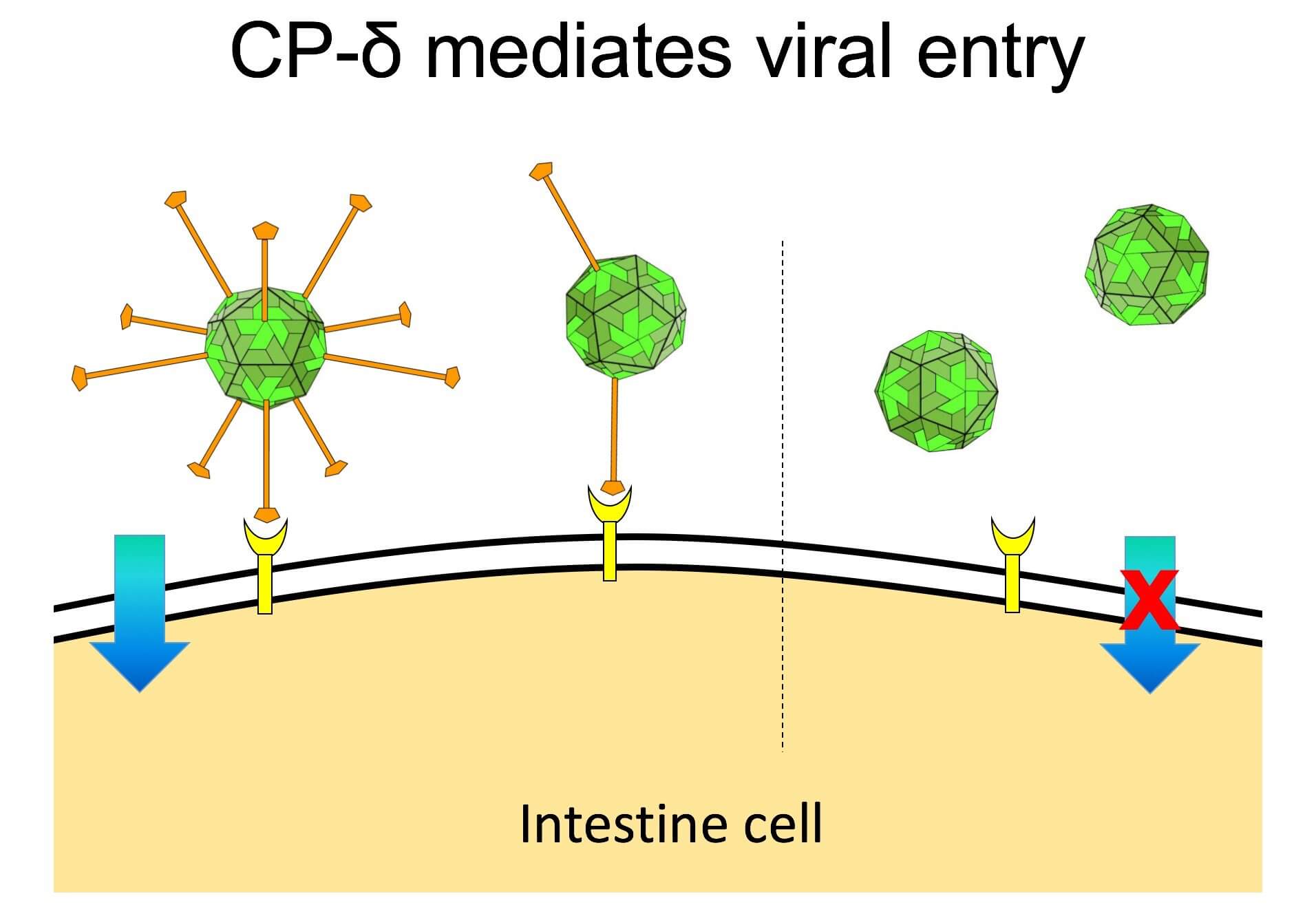 A protein unlike any other appears to be partially responsible for upsetting the stomachs of the most common animal on the planet.

Results of a Rice University study of the Orsay virus unique to nematodes, the worms that make up 80 percent of living creatures on Earth, have revealed the molecular structure of a fusion protein that forms unusual fibers and attaches the virus to cells and infects them.

The researchers led by structural biologist Yizhi Jane Tao and geneticist Weiwei Zhong said the protein is the first pentameric fiber with potential antiviral applications. They hope it will guide bioengineers as they develop synthetic variations of the virus that can infect new worm hosts, including the parasitic ones that infect humans and animals.

Their research is detailed in the open-access journal PLOS Pathogens.

The Orsay virus, the first known to infect Caenorhabditis elegans, was discovered in France in 2011. It doesn’t kill the worm, but infects its digestive tract. Three years ago, the Rice researchers won a race to detail the complete crystal structure of the virus — a key step in figuring out its mechanism — and then won a major National Institutes of Health grant to study it.

What they call the delta protein is one of three proteins that make up the Orsay virus. The others are the viral capsid shell and the RNA-dependent RNA polymerase (RdRP) that are responsible for protecting and replicating the viral genome, respectively. The protruding delta protein appears to be responsible for binding the virus to the surface of cells, which enables infection.

That function isn’t unique, but the protein’s form is out of the ordinary, Tao said. Immediately upon expression, individual delta units gather into five-unit fibers known as pentameric proteins that extend the reach of the virus well beyond the capsid and allows them to probe for receptor targets on cells.

The fibers can also exist as stand-alone units that show promise for disrupting infectious disease. The researchers synthesized free-floating pentameric delta fibers and fed them to C. elegans, where they quickly filled cell-receptor sites. When the researchers exposed these worms to Orsay, the virus was unable to deliver its infectious load.

The researchers did not find single delta subunits in cells, which suggested the proteins are programmed to assemble into only five-unit fibers. While protein fibers are not uncommon for viruses, Tao said this is the first molecule that was found to form pentameric fibers.

Lead authors and Rice graduate students Yanlin Fan and Yusong Guo not only detailed the protein’s homogenous structure but also captured electron microscope images of the ultrafine spikes they produce.

“The virus only encodes three proteins, so we knew this one must be important,” said Tao, whose lab analyzes the structure and function of molecules through X-ray crystallography and electron microscopy. “By studying Orsay’s replication cycle, we learned that it’s a receptor binding protein. The virus first has to recognize a permissive host and get into the cell, and this protein carries out that function.”

Zhong said lab-created mutants of the virus that lacked the fiber could not infect worms. In another experiment, the researchers found that free-floating delta protein fibers would bind to receptors on the worms’ cells, also protecting them. “Ying just doped the worms with delta proteins, which saturated and locked the receptors,” she said. “Then she added the virus, which was unable to infect them.”

Structural details of the unusual protein could help bioengineers synthesize custom versions to generate new viruses to target parasitic worms, Zhong said. “By studying the binding tip of the fiber, maybe we can figure out why the delta recognizes specific species of worms,” she said.

The next step will be to figure out how the viral payload gets into cells, where Orsay is replicated – and then how it gets out to infect others. “But finding this binding protein is a good start,” Tao said. “It’s novel and it’s eye-opening.”