One Hour with an LVAD Legend

One Hour with an LVAD Legend 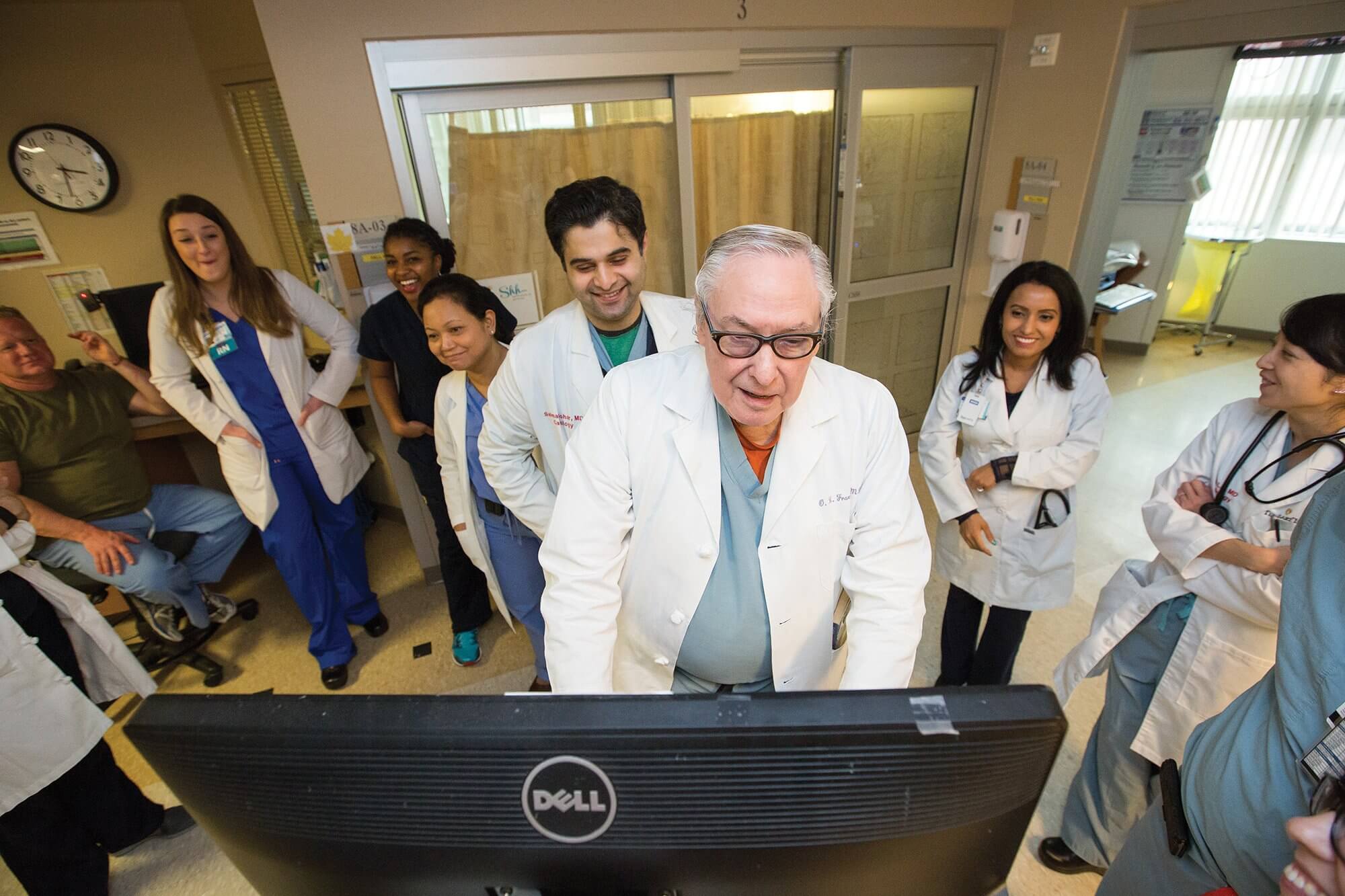 At 3:05 p.m. on a recent Tuesday, O.H. “Bud” Frazier, M.D., pushed through the double doors of the cardiovascular and thoracic surgery unit of Baylor St. Luke’s Medical Center. Immediately, he went in search of some coffee.

A large crowd had congregated to greet and learn from the man who is recognized as the leader in the development of left ventricular assist devices (LVADs).

Last November, Frazier, chief of transplant services at Baylor St. Luke’s, professor of surgery at Baylor College of Medicine and chief of the Center for Cardiac Support at the Texas Heart Institute, launched monthly one-hour bedside teaching rounds on LVADs. Students, interns, residents, fellows, nurse practitioners and physician assistants are invited to spend an hour with him.

LVADs are the most widely-used heart pump. Over the past decade, an estimated 30,000 LVADs have been implanted in patients around the world. These electromechanical pumps, also called mechanical circulatory support devices, were developed by a handful of pioneering heart surgeons from the Texas Medical Center, including Frazier.

“I studied the idea of LVADs for two years with Dr. Michael DeBakey because there were not enough hearts for transplants,” Frazier explained. “Recently, I was in Kazakhstan, where they have implanted 400 pumps. Nobody thought that was possible to do.”

Frazier is a protégé of both DeBakey and Denton Cooley, M.D., but he blazed his own trail in clinical practice, research and teaching. He has performed more than 1,300 heart transplants and implanted close to 1,000 LVADs, outnumbering any other surgeon in the world, according to CHI St. Luke’s Health.

In 1986, Frazier performed the world’s first implantation of HealthMate I, a pneumatically powered LVAD. In 2000, he implanted the Jarvik 2000 LVAD, a continuous-flow pump widely used as long-term support for patients who may not be candidates for transplants. Then in 2011, Frazier and William E. “Billy” Cohn, M.D., implanted the first total heart replacement with two continuous-flow pumps inside a human patient.

During his teaching rounds, Frazier focused on a female patient whose first LVAD failed. Frazier spoke with the patient’s care team and tried to determine what would cause the pump to stop working. Some people have had heart pumps for as long as 13 years without any issues, he explained.

Frazier’s continuous-flow pump design is different from older pulsatile pumps that mimic the healthy human heart and beat 100,000 times every 24 hours. The newer, non-pulsatile pumps produce a continuous flow of blood and are smaller and more durable without the parts needed to produce frequent pulses.

“The pump works like a light that you turn on and off,” Frazier explained. “If they are made properly, which this one was, it can’t be the pump. It has to be something about the way it was implanted.”

The pump spins blood through the heart like coffee that is being stirred in a cup, he explained. It was designed flat so that it could be implanted on the right or the left side of the heart, but works best when placed on the diaphragmatic surface of the heart—the interior surface that rests on the diaphragm.

Frazier examined CT scans of the patient’s heart and hypothesized that the way the LVAD was implanted created a problem with the inlet or outlet of blood. Complications can occur when the stent graft is not made big enough to keep the artery open, he said.

Upon hearing that the patient suffered a stroke during the surgery, Frazier called the episode “unusual” and discussed how sometimes the body goes into shock during surgery, elevating the aortic blood pressure to the point where stroke occurs.

Toward the end of the hour, Frazier met with the patient and spent several minutes examining her and discussing her condition.

“We can’t always know what to do,” he told the crowd assembled. “But we must try to do what we can to correct problems.”