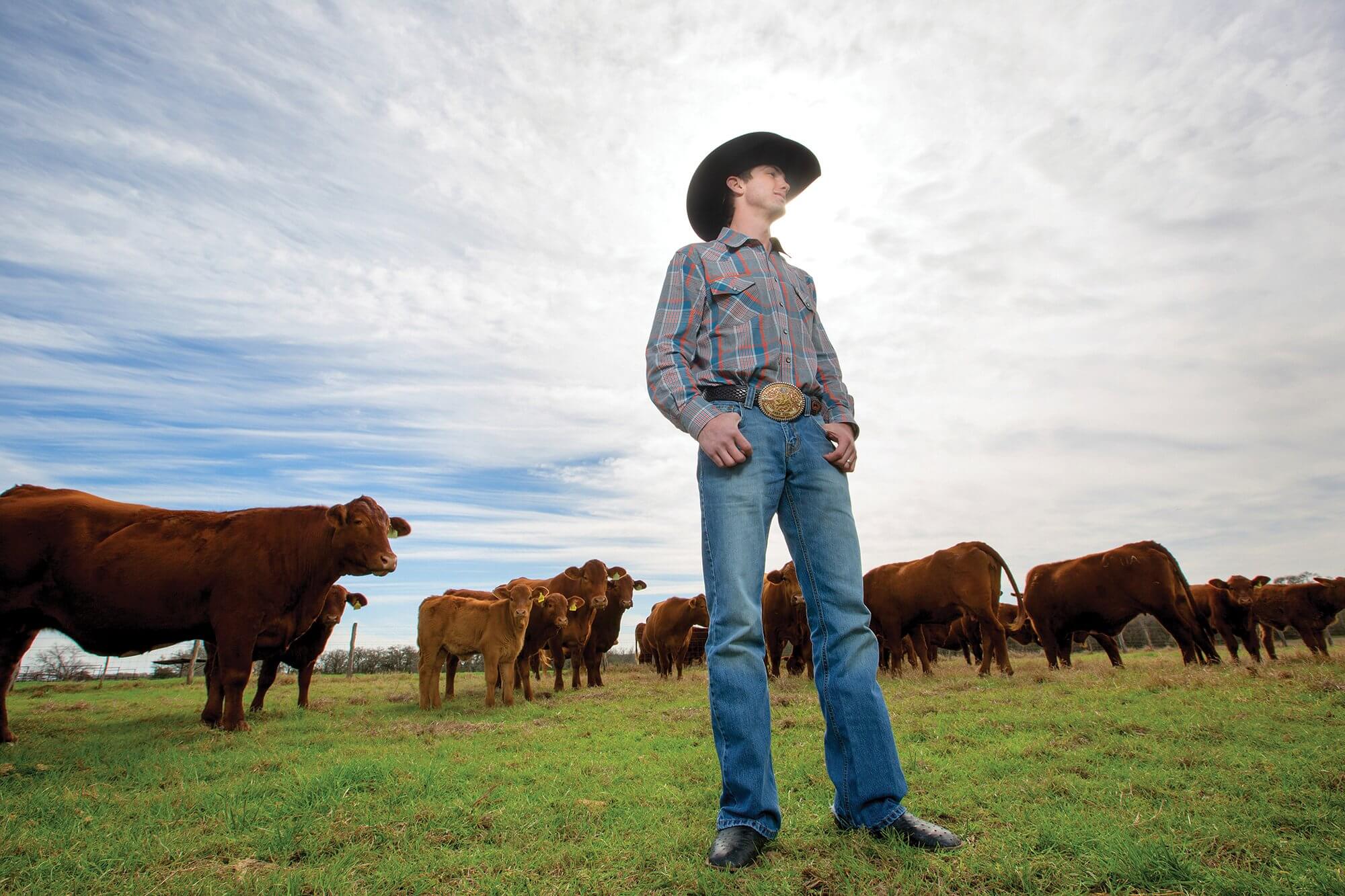 Growing up in Kountze, Texas, a small town outside of Beaumont, Cody Teel was gripped by the idea of becoming a bull rider like his father.

“My dad was a bull rider before I was born, so I grew up hearing stories he would tell about his days as a rider,” Teel said, as he dropped feed for cattle at his wife’s family’s ranch near College Station, Texas. “When I was younger, I would just sit and study a list of all the rodeos and the days. I used to pretend like I was entering them and put them in my schedule.”

As the herd of cattle came in to feed, Teel, 24, recalled his early days as a rider. Before he was 10, he was riding calves. By the time he reached high school, he was a full-blown rodeo competitor.

But as his success as a bull rider grew, so did his list of injuries.

“I had had a few minor injuries—broken ribs, broken fingers—before my first major one in 2010,” Teel said. “It was my rookie year and a bull’s head hit me in the stomach and ruptured my small intestine. So I had to go back, get that fixed, and then I had to go back a second time because of issues with the scar tissue.”

The injury put Teel in the hospital for three weeks and out of competition for four months, an eternity for a bull rider.

“Taking time off becomes a financial strain for the riders,” said Taylor Brown, M.D., Houston Methodist Hospital orthopedic surgeon and captain of the sports medicine team for the Houston Livestock Show and Rodeo. “It’s not like other professional sports where they have a contract. Those athletes have a salary and they get paid even when they are out. These guys don’t get any money if they don’t ride.”

And unlike other professional athletes, bull riders pay their own way to travel to the numerous rodeos they enter each year.

In American bull riding, a rider grips a rope that wraps around the chest of the bull. To earn a score, a rider must stay on the bull for eight seconds with one hand on the rope and the other in the air.

One major injury every year

Over the course of his seven-year professional career, Teel has competed in roughly 600 rodeos, won more than $1 million in prizes and has had at least one major injury every year—a fact that is somewhat remarkable to Brown.

“Unlike other contact sports, bull riding is one of those where it’s a 2,000-pound animal versus a 150- to 200-pound person,” Brown said. “To me, what is amazing is how few injuries there are. As a physician who is watching it, I think, how is it that everybody doesn’t get hurt?”

Coming back from a physical injury takes mental stamina.

“After my first injury, just getting back, knowing that I wasn’t a piece of glass that would shatter if I fell, that was tough,” Teel said. “The mental side was the biggest thing for me, more than the physical toll it took on me.”

In March 2013 at the Houston rodeo, Teel pulled up on the neck of a bull. He was struck in the head, knocked from the bull and then hit the ground, unconscious.

“When Cody was injured in Houston, it was something you could see from the arena—we all saw his arm go backwards,” Brown said. “Most of the injuries aren’t so readily visible or apparent on TV. Most of the guys can limp or walk off and then we can patch them up back in the training room, but that wasn’t possible.”

After the fall, Teel was taken to Houston Methodist Hospital to repair his left elbow, which was dislocated and shattered. During surgery, doctors fitted 10 screws and two plates in his elbow.

“I always say that if you’re going to get hurt, Houston is a good place to do it,” Teel said. “They can do a lot of sports medicine and X-rays right there at the rodeo, but if you need something else, you can be at the hospital in five minutes. It’s very helpful when you are in a bad situation.”

A broken ankle and a new love

The rest of 2013 was a tough year for Teel. Just three months after injuring his elbow, he broke his jaw on both sides. To heal, his jaw was wired shut and a plate was put in his chin.

“Depending on the injury, I usually take three or four months off,” Teel said. “The more injuries I have now, I kind of know the deal and I know how to recover. It’s just more about the mental part of it—you have to know yourself, know where you are at in the healing process, and climb back on.”

The following spring, he was ready to take on the Houston rodeo again.

“I went to the Houston rodeo every year growing up,” Teel said. “To get the chance to ride there means a lot to me.”

He didn’t end up with the title in 2014. Instead, he walked away from the Houston rodeo with a broken ankle and a new girlfriend, Kaitlin. They got married last November.

“We had been talking for a while, but he actually asked me to officially be his girlfriend while we were at the rodeo,” Kaitlin said. “I never thought in a million years that I would end up with a rodeo guy. … He is very reserved, respectful and nice.”

The two share a 4.5-acre ranch outside of College Station. Inside their home, evidence of Teel’s rodeo success is everywhere. Saddles line the wall of their living room and buckles from his winnings are displayed under a glass coffee table. Outside, you‘ll find miniature pigs named Wilbur and Porky, a miniature horse and a flock of miniature goats.

“Cody is on the road a lot so he lets me get all of the animals I want,” Kaitlin explained. “Wilbur and Porky are pretty much like our children.”

Kaitlin has seen the toll bull riding takes on her husband.

“At first it was really scary to see him get injured so much,” she said. “But now that I’m used to it, I get more nervous about seeing the results than I do about the injuries.”

This year, Teel has taken a longer off-season than normal to heal his broken left clavicle, an injury from the National Finals Rodeo in December.

“As a rider, it is really up to you when you want to go back,” Teel said. “I was cleared by my doctor to go back to riding, but the only thing I have on my sched- ule for sure right now is Rodeo Houston. I’ve been using this time to sit off and it has built a fire in me.”

“I don’t know a lot about fitness and I don’t have a strict routine I follow, but I do a lot of core workouts, lunges, squats and hip flexors because my hips get so sore,” he said. “I think being flexible helps a lot when you are riding.”

As the Houston rodeo approaches, Teel is looking forward to winning it all.

“I’ve been close before, but I want to win it,” he said. “The first thing that comes to my mind is that buckle—a very unique, rectangular-shaped buckle—and the saddle that says ‘Rodeo Houston Champion Bull Rider.’ That’s what I want to win.” 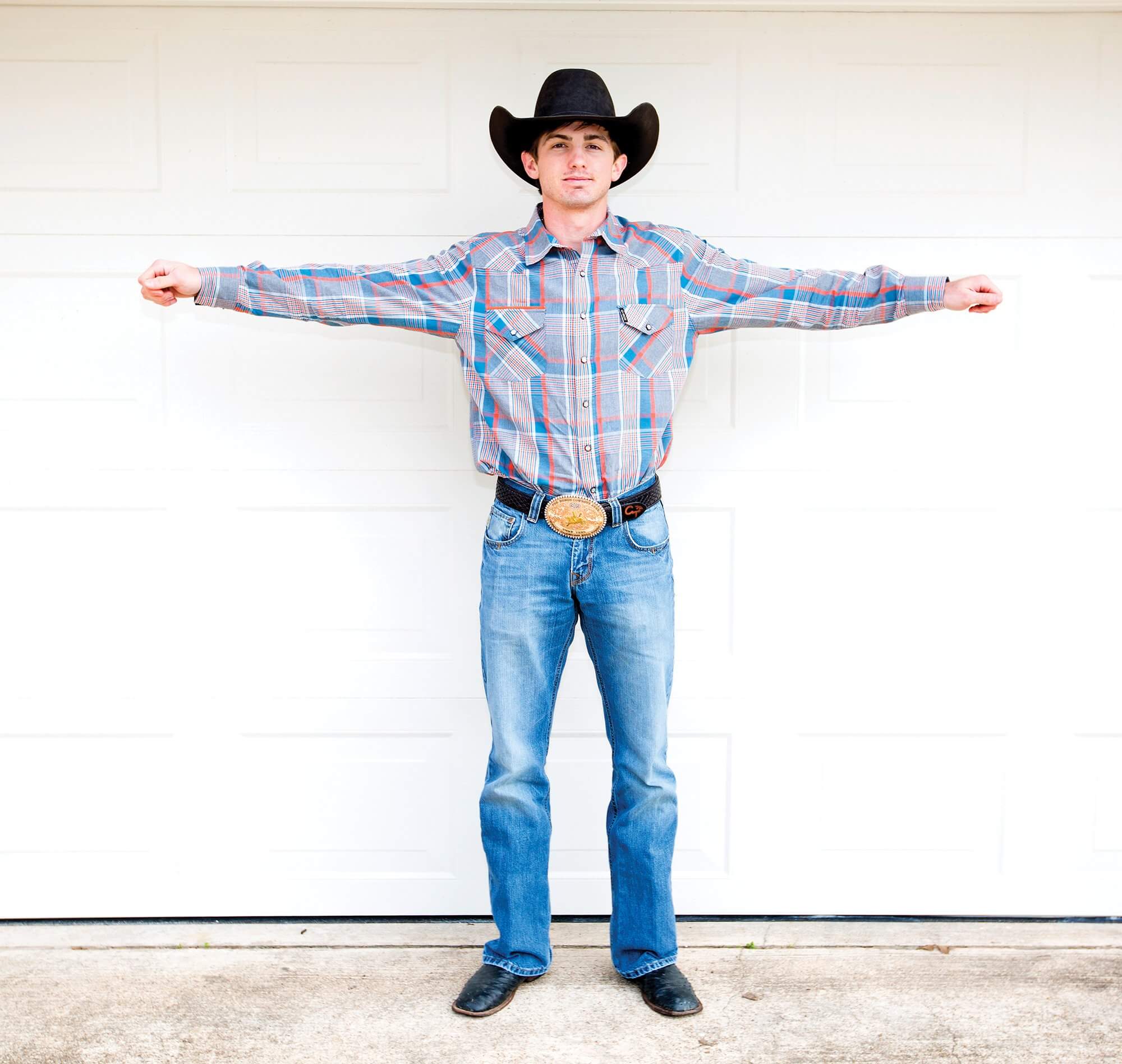 From head to toe, Teel’s injuries include:

CHIN – Teel had a plate put in his chin.
JAW – Teel broke his jaw on both sides. For a time, his jaw was wired shut.
FINGERS – Teel has broken a few fingers.
ELBOW – Teel shattered and dislocated his left elbow in Houston. Doctors put 10 screws and two plates in his arm to repair it.
RIBS – Teel has bruised several ribs.
STOMACH – A bull gored Teel’s stomach and ruptured his duodenum, the rst section of his small intestine.
LOWER LEG – Teel broke his left fibula.
ANKLE – Teel broke his right ankle in Houston.