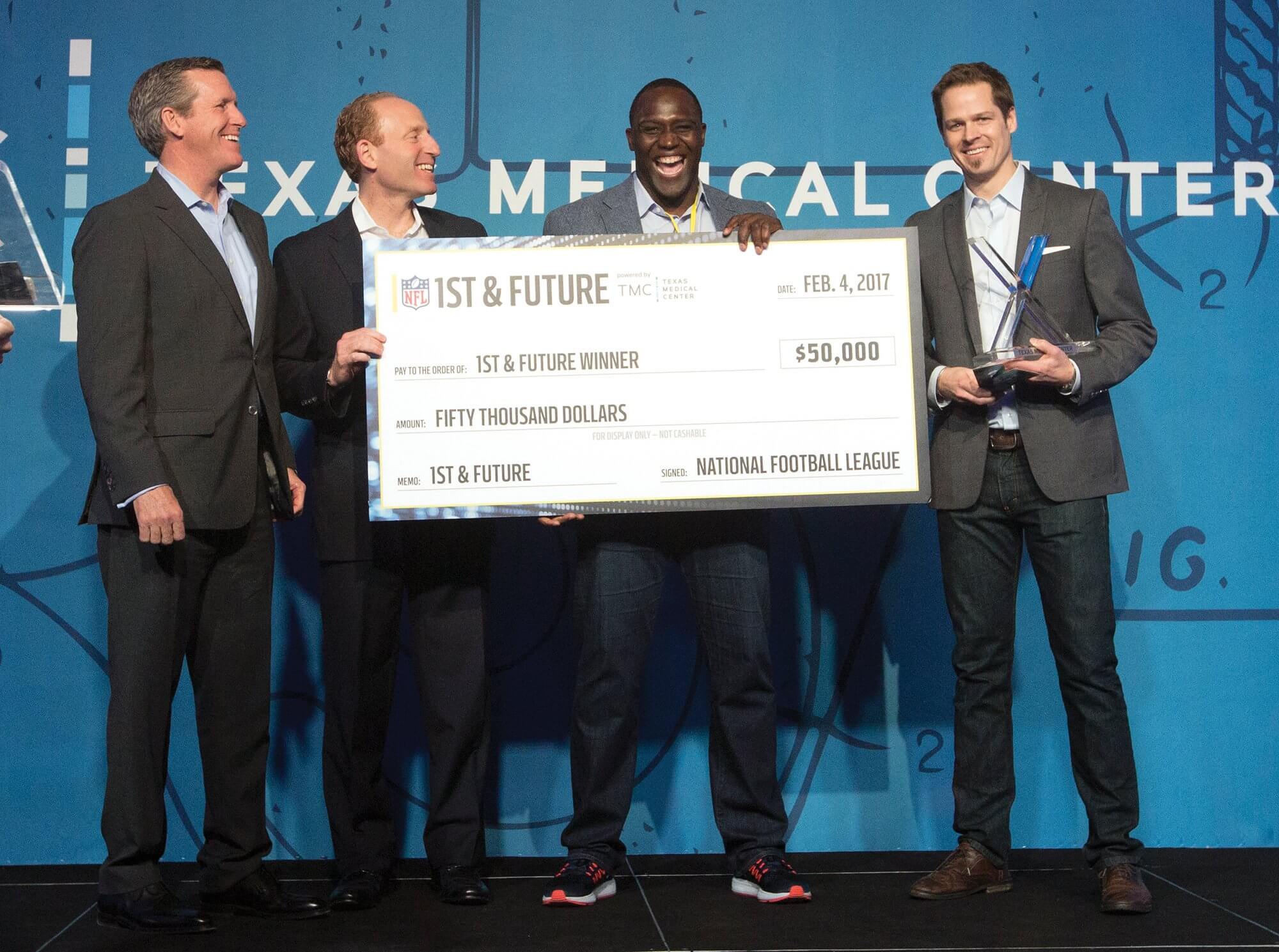 Super Bowl Sunday featured a historic showdown between the two best teams in the NFL, but it wasn’t the only major competition taking place in Houston over game day weekend.

On Feb. 4, nine startup companies, culled from more than 200 entries, descended on the Texas Medical Center’s Innovation Institute accelerator (TMCx) to pitch their solutions to some of football’s biggest problems. The second annual 1st and Future pitch competition is an opportunity for start-ups across the country to share their ideas and prototypes with an exclusive audience made up of NFL and industry VIPs, as well as a panel of expert judges.

One company in each category— ‘Communicating with the Athlete,’ ‘Training the Athlete’ and ‘Materials to Protect the Athlete’—won $50,000, acceptance into the TMCx startup program and two tickets to Super Bowl LI.

GoRout took the prize in the communication category with its onfield wearable technology that sends play calls and coaching tips to players in real time.

Not surprisingly, two of the three winning technologies were created with concussions in mind.

Windpact, the winner in the category dedicated to materials for protecting athletes, designed a patented padding system that uses air and foam to absorb and disperse energy from impact. The system, intended for helmets and other padding gear, was created under the guidance of retired NFL cornerback Shawn Springs.

In the ‘Training the Athlete’ category, the ‘Mobile Virtual Player’ (MVP) emerged as the winner. Created by John Currier and Buddy Teevens, head football coach at Dartmouth College, the MVP is a remote-controlled, self-righting mobile virtual player that removes the need for live tackling during practice and subsequently reduces injuries. The virtual player stands at 5’10” and weighs 180 pounds.

Scott Hanson of the NFL Network emceed the competition, which included introductory remarks from Gov. Greg Abbott, who delivered a moving speech about his own life-changing experience at the TMC.

“It was because of the care provided at this medical center that they were able to piece my life back together, and then after that enable me to go on and be governor of this state,” said Abbott, whose legs were paralyzed in 1984 after a tree limb fell and struck him while he was jogging. “What happens here really sparks medical and science breakthroughs that change the world that we live in. They save lives, they lengthen lives, they transform lives.”

TMC President and CEO Robert C. Robbins, M.D., moderated a discussion on innovation and industry partnerships between NFL Commissioner Roger Goodell and General Electric CEO and Chairman Jeff Immelt. The NFL and GE have collaborated on initiatives geared toward the safety of athletes, specifically through accelerating concussion research, diagnosis and treatments.

“We’re having the discussion around football today, but it’s a broader study of Parkinson’s and Alzheimer’s and dementia,” said Immelt, in reference to concussions. “It’s all going to be fed back through the health care system, and this is the definitive health care challenge of this era—the study of the brain.”

Ed Egan, Ph.D., director of the McNair Center for Entrepreneurship and Innovation at Rice University’s Baker Institute and one of six judges of the competition, said he chose the winners based on business potential and the ability to effect change.

Another judge, Mae Jemison, M.D., the first African-American woman to travel in space and a principal with the organization 100 Year Starship, said she was looking for devices applicable to areas beyond football that would help protect athletes and prevent dangerous situations.

Robbins hopes the competition will help athletes at all levels.

“Whatever the NFL does is going to trickle down to college and to high school and to Pop Warner football, so it’s an important responsibility that the NFL has,” Robbins said. “I think nothing’s perfect, but they are making great strides to make the game safer.”