A Coil to Save the Heart

A Coil to Save the Heart 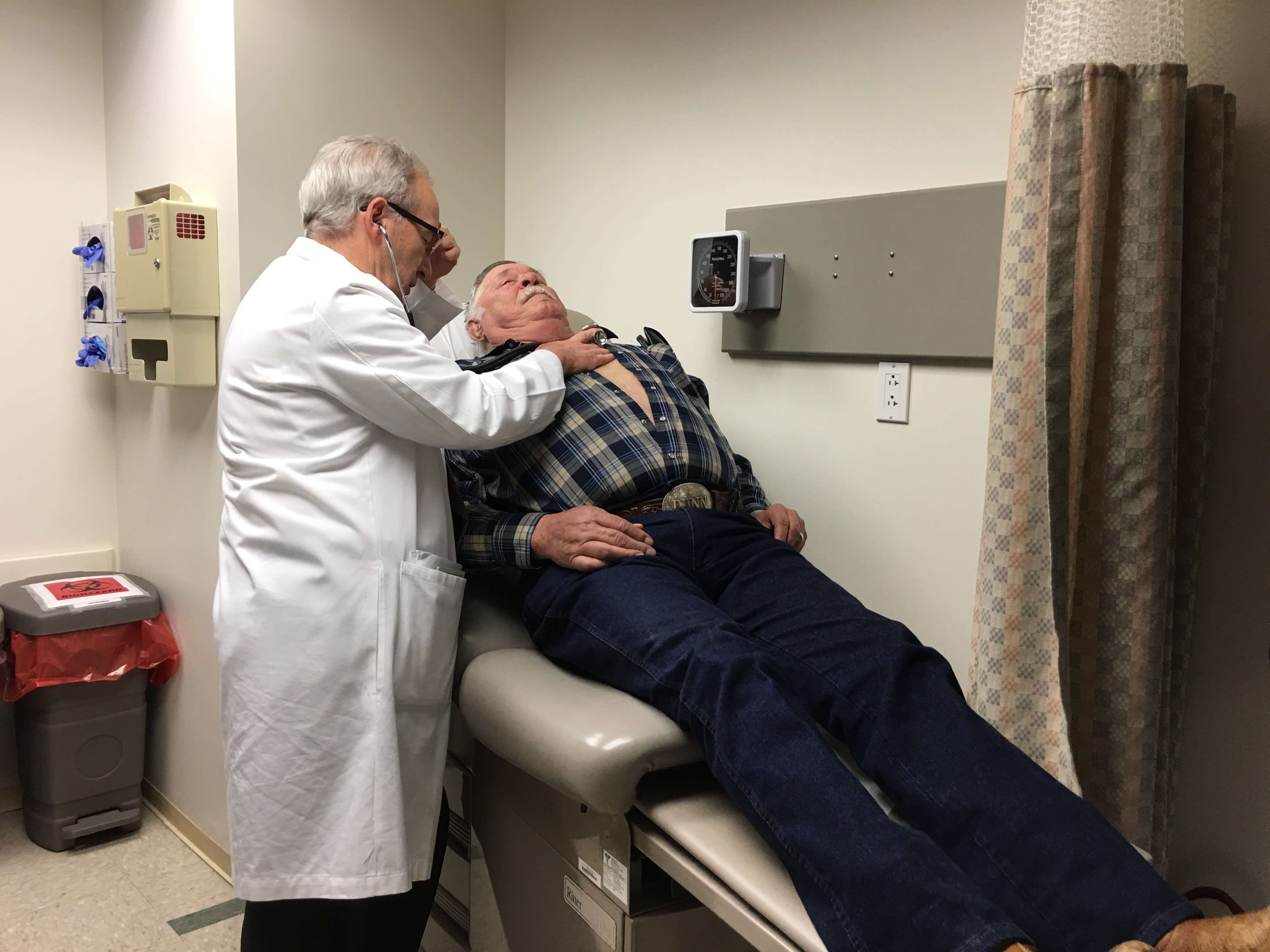 On a hot summer day in July 2016, Alvin Dunn, 68, was working alone on his 10,000-acre family ranch in Ballinger, Texas, when he suddenly collapsed.

Disoriented and perplexed by what caused him to pass out, he regained consciousness a few minutes later and returned home to help his wife pack for their upcoming trip to San Antonio. While his wife was in another room, he keeled over again in their bedroom.

“I made up my mind after that second time that, as soon as we get back,” Dunn said, “I’m going to a doctor.”

When they returned from San Antonio, Dunn was referred to a cardiac surgeon in Houston. After a cardiac magnetic resonance imaging test showed an unusual bulge in his heart, it became clear that something was very wrong with Dunn’s heart: He had a rare heart condition called hypertrophic obstructive cardiomyopathy, also referred to as HOCM.

The condition affects 1 in 500 adults and is caused by an abnormal thickening of the upper part of the wall, creating a bulge between the left ventricle and right ventricle, which are the main pumping chambers of the heart.

“In patients with HOCM, typically, as the blood tries to zip around this bulge below the aortic valve, it has to speed up,” explained Dunn’s cardiologist Richard Smalling, M.D., Ph.D., director of interventional cardiovascular medicine at The University of Texas Health Science Center at Houston (UTHealth) and the Memorial Hermann Heart & Vascular Institute-Texas Medical Center. “When it speeds up, the local pressure goes down inside the ventricle.”

This causes the mitral valve, which opens and shuts to regulate the flow of blood, to touch the enlarged septum wall and obstruct blood flow from the left ventricle out of the heart.

“People didn’t figure out that every time he passed out after he bent over to tie his shoes was because of his HOCM,” said Smalling.

Patients with HOCM can experience symptoms such as chest pain, shortness of breath, loss of consciousness and irregular heartbeats.

Medications designed to slow down the heart rate to allow the heart to pump more efficiently can be used to treat HOCM. However, there’s no guarantee that medication will always resolve the case.

Alternatively, there are two different types of procedures to address HOCM. First, doctors could perform open heart surgery in which they stop the heart, go through the aorta and shave off part of the overgrown septum. It’s an invasive and risky procedure, said Smalling, who is the James D. Woods Distinguished Chair of Cardiovascular Medicine and the Jay Brent Sterling Professorship in Cardiovascular Medicine at UTHealth.

The other option, called alcohol septal ablation (ASA), is to inject pure alcohol through a catheter into the artery supplying blood to that area to destroy part of the thickened heart muscle. This procedure is also risky because ASA is “somewhat nonselective,” as Smalling described. The alcohol can spread to other areas of the heart and damage the tissue. In approximately 20 percent of cases, the alcohol will damage the heart’s “natural pacemaker” system and require doctors to implant an artificial one instead.

In addition, because ASA is not done under general anesthesia, this option tends to be very painful during the procedure.

Luckily for Dunn, there was a new, safer and more effective noninvasive third option, using coils, that Smalling and his team had performed with much success. The procedure is called coil embolization, which has been used for decades to treat aneurysms of different vessels in the brain.

This technique consists of inserting a catheter through the femoral artery near the groin. In this case, the catheter feeds a coil to plug the blood vessels supplying the septal bulge, allowing the bulge to shrink and improving normal heart function. 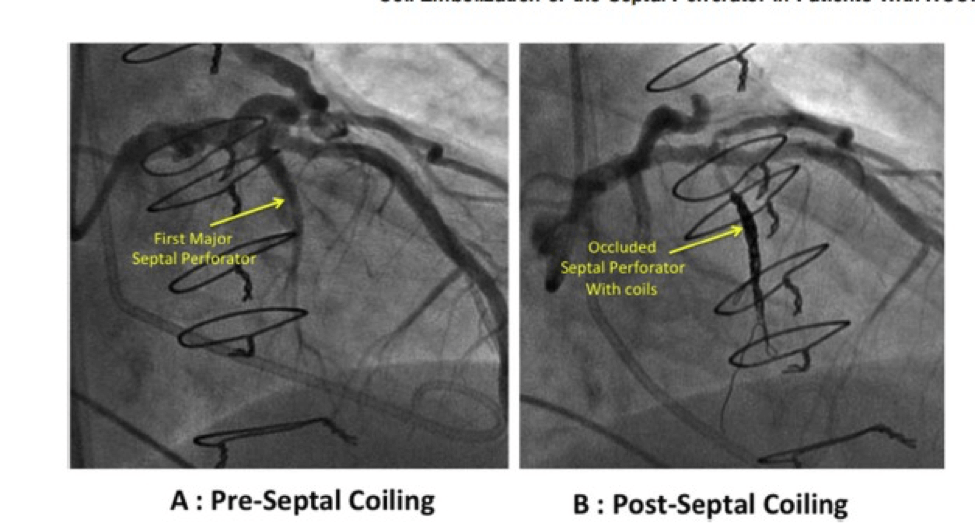 Smalling initially tried the approach 15 years ago on a 75-year-old female patient who seemed to have exhausted all other treatment options.

He and his team replicated the procedure in a pilot program that studied 24 patients over the span of 10 years from 2005 to 2015. Of the 24 patients in the trial, 22 of them saw successful results and immediate improvements.

Now, he uses this method as a first approach for the few HOCM patients he treats a year, including Dunn.

“You could always do open heart surgery if this didn’t work,” Smalling said. “Our strategy at the present time is to continue to use the coil embolization, follow our results and if the patient doesn’t respond to it, then we can always send them to open heart surgery.”

On Tuesday morning, Nov. 22, 2016, Dunn and his family entered the Memorial Hermann Heart & Vascular Institute-TMC and awaited instructions from Smalling and his team.

“When [Dr. Smalling] came in that morning and told me, ‘We’re going to try something on you,’” Dunn recalled. “I told him, ‘I do not care as long as you fix me. I’m tired of the alternative of not being able to breathe.’”

When someone on Smalling’s staff asked if he was nervous about the procedure, Dunn, a veteran who served as a paratrooper during the Vietnam War, relied on his military training to get him through.

After an hour and a half and a needle prick later, Dunn’s heart was back to normal.

“He became asymptomatic immediately after the procedure,” Smalling said. “That was very gratifying to see.”

Dunn continues to keep a close eye on his health. He quit smoking, cold turkey, after 47 years and cut back his Dr. Pepper consumption in half, but Dunn is back to doing what he loves, including playing with his grandchildren and enjoying the outdoors without worrying about his heart.

“I went quail hunting [last week] for three days and that’s going through the grass and weeds up to your knees,” he said. “I thoroughly enjoyed it!”