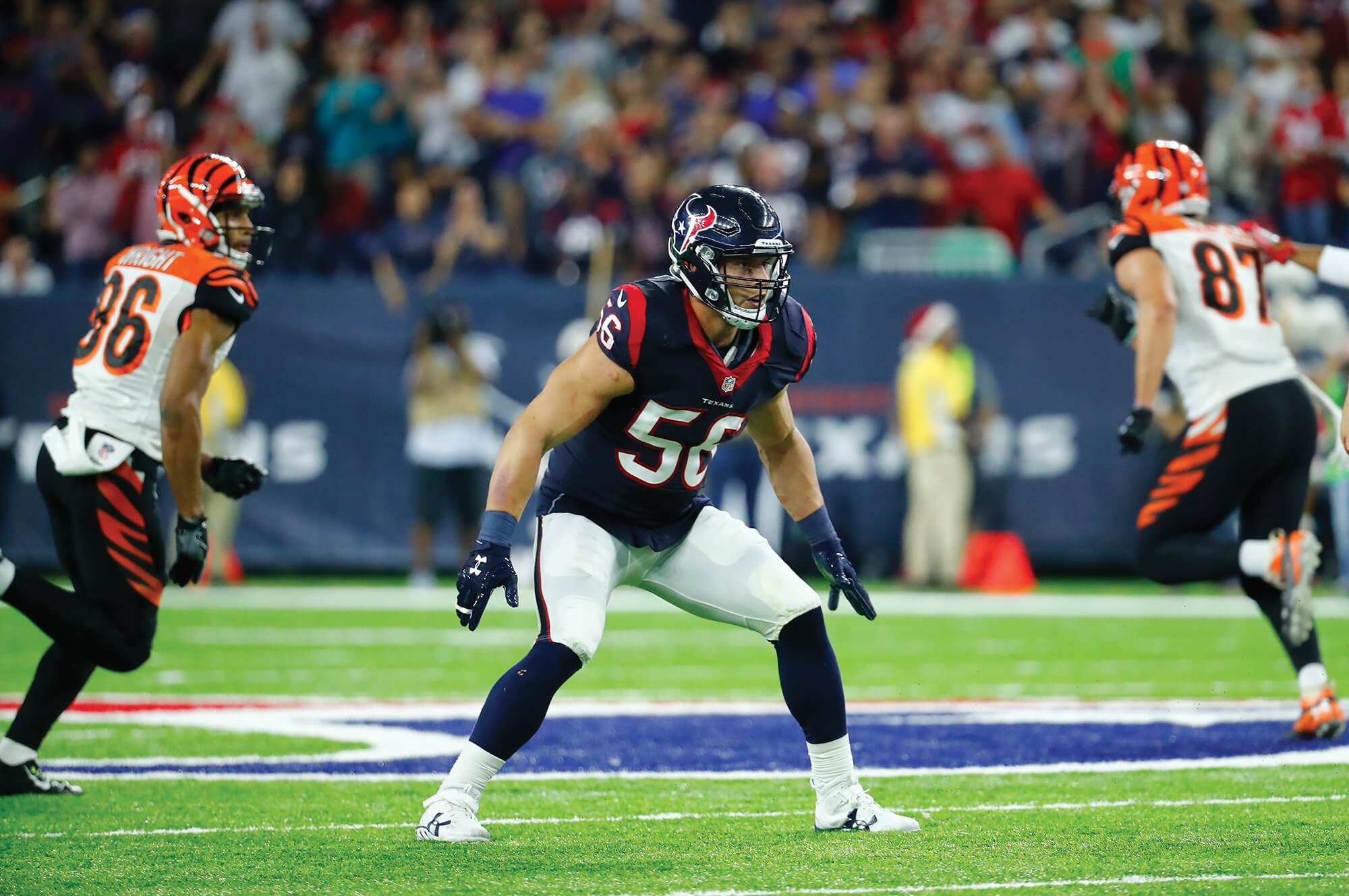 Brian Cushing is a force. At 6’3″ and 255 pounds, the veteran inside linebacker for the Houston Texans executes tackles with military precision.

And there’s good reason for that. Cushing attributes his unwavering focus and determination to growing up in a strict military household, “where there were no other options other than being successful and getting the job done.”

His great-great-uncle, Alonzo Cushing, was a Union Army artillery officer who died at the Battle of Gettysburg and was posthumously awarded the Medal of Honor in 2014 by President Barack Obama. Cushing’s father, Frank Cushing, served as an intelligence officer during the Vietnam War. His mother, Antoinette Cushing (née Lukaszewicz), was born in 1944 inside a Nazi Germany concentration camp.

During that time, at least 1.5 million Polish citizens were torn from their homes and relocated to forced labor camps, prisons and concentration camps in Germany.

“The older I got and the more I understood what my parents went through and came from, it gave me a much better understanding of who they were and what they dealt with,” Cushing said. “Just knowing that, I complained less and really got after a lot more things.”

Cushing played for the Trojans at the University of Southern California before starting his professional career with the Texans in 2009. He was named NFL Defensive Rookie of the Year in 2009, Team MVP in 2011, and is the all-time leading tackler in the franchise’s history, with 648 tackles.

“I think Brian Cushing has done an excellent job of leading that defense,” said head Texans coach Bill O’Brien during a recent press conference. “He’s the heart and soul, right in the middle.”

For all of Cushing’s NFL glory, his career has also been punctuated by game suspensions for taking a performance-enhancing drug, as well as season-ending injuries, including torn muscles in the knee and fractured bones in his back. But he is nothing if not resilient.

“Having to come back off of the injuries was definitely … physically and mentally challenging,” said the 30-year-old linebacker. “I decided a long time ago that football was going to be my profession and I wasn’t going to let anything get in the way of that.”

Cushing said he probably would have pursued a career in the military if it weren’t for football. But he’s able to maintain a connection to the military community through his charity work.

In 2015, Cushing and his wife, Megan, created the Brian Cushing Foundation to support Houston-area veterans and their families. Through the foundation, Cushing launched a program called Cushing’s Corner to provide electronic equipment—including headphones, DVD players and iPads—to nearly 500,000 local veterans and their families. In May 2016, Cushing selected the Michael E. DeBakey Veterans Affairs Medical Center to be the recipient of the first Cushing’s Corner, followed by the Ellington Field Joint Reserve Base in October 2016.

“When it was time for me to start my foundation and start my charity work, it was just one of those things I wanted to do,” he said. “Knowing how much people in my family were tied to the military, it was just a no-brainer.”

Because of his commitment to serving veterans, the Texans nominated Cushing for the Walter Payton NFL Man of the Year Award, which recognizes an athlete’s outstanding philanthropy and charitable efforts. The winner will be announced on Feb. 4., the evening before Super Bowl LI.