Kicking It With the Boys

Kicking It With the Boys 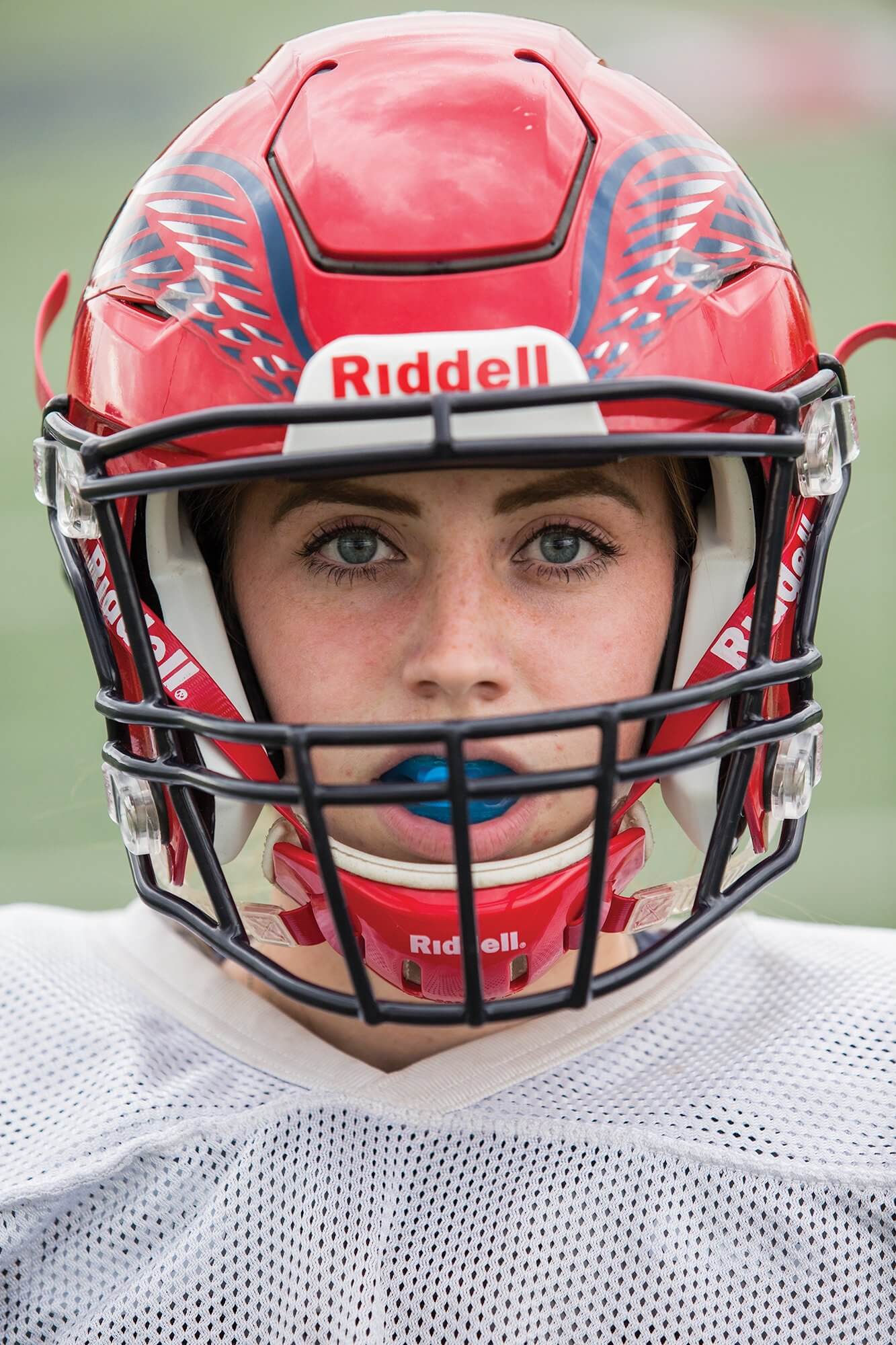 On the tree-lined streets of suburban Pearland, yard signs planted outside many homes tout the accomplishments of the students who live inside.

Cheerleading. Band. Baseball. A coveted 5 on an AP exam.

But the sign that greets visitors to the home of Claire Jeffress, a Glenda Dawson High School junior, shows a football helmet. It’s a sign no other female at Dawson can claim.

Claire is a kicker on the Dawson Eagles varsity football team. She’s not the first female to play local high school football, but she is among an elite group of young women with a spot on a varsity men’s roster.

Claire has been playing soccer since she was 4 years old. By the time she reached seventh grade, she had an easy rapport with her middle school coaches. So when the football coach needed a kicker, Claire did a spur-of-the-moment tryout—kicking the football in volleyball shoes.

“It ended up working out, and I enjoyed it, so I kept on doing it,” said Claire, seated on her family couch wearing a Dawson High T-shirt and her signature side braid.

Claire was so excited to join the football team that she forgot to ask two important people if it was all right.

“She came home that day and asked if she could play football, but by that time she had already tried out and made the team,” said Isabelle Jeffress, Claire’s mother. “She had also already told the coach she would be on the team.”

Claire’s mom was nervous about her daughter playing with boys twice her size.

“I took it one year at a time,” Isabelle said. “Because she started off with a great team in seventh grade, those are the same boys she has played with every year. They know her well and are really protective of her. She is like their little sister.”

“I like knowing they are my brothers,” she said of her teammates. “I have met my best friends on the football team.”

Of course, there were growing pains.

Claire’s locker room was nowhere near the boys’ locker room, so she never knew exactly when to head onto the field for practice. Once, while herding the team onto the bus for an away game, the coaches didn’t realize Claire wasn’t aboard. She ultimately made it on the bus, but they had to come up with a system: coach would blow the whistle outside the girl’s locker room to signal Claire it was time to go.

And then there are the reactions of the opposing teams. It’s been normal for the Dawson team to have a girl, because Claire and the other players grew up playing football together. But other players and parents are often shocked to discover that the kicker is female. And many have been skeptical of Claire’s skill.

“At the beginning, I did have to push a little hard to prove myself, but I always asked the coaches to look at me like any other person,” Claire said. “I didn’t want to make the team because I was a girl—I didn’t want it to be some special factor. I wanted to make it because I deserved to be on the team. They understood that.”

Getting comfortable in a football uniform was a strange experience for Claire. She had to get used to running and kicking in shoulder pads. She also had to wear a football girdle: a long, stretchy garment fitted with thigh and hip pads.

Football is a tough sport and injuries can happen with every play. Claire isn’t too worried, because she takes a lot of hard hits in soccer. Most of her bruises come from soccer, not football, she said.

“The guys I have protecting me on the line, I trust so much,” Claire added. “I have not gotten touched so far this season.”

And for the guys, there are distinct advantages to having a girl on the team. Claire has become “the sounding board for every girl problem” that the boys are having, according to her mother.

Claire quickly explains that her teammates understand that she is not into drama, but they know they can always come to her with issues, and vice versa.

Claire’s father, Jeff Jeffress, put his foot down about dating during football.

“He told me, ‘Let’s not start any drama with the football team,’” Claire explained.

She did at one time have a boyfriend on the football team, but she prefers to keep her personal life separate from her athletic life, even with club soccer. She would rather her school friends not attend those games because she wants to be completely focused. The same goes with football.

Listening to her body

Health-wise, Claire makes sure to get lots of sleep and stay hydrated.

She’s also very ritualistic about her eating habits. She likes to eat very plainly prior to games: a sandwich and fruit—nothing heavy. She says some of the guys will go out and have burgers and fries before a game, but she doesn’t like a lot of food in her stomach.

During soccer season in the spring, Claire plays center midfield, a position that requires a lot of running. She also plays competitive club soccer with Houston Express Soccer Club. Many of her school breaks are spent with the club at showcases designed to draw collegiate scouts.

“I am trying to play soccer in college, so the recruiting process has been heavy this year,” Claire said.

Both of her parents went to Rice University, and her brother goes to Rice, as well. Claire has grown up with an appreciation for the school, and is considering it and other schools with strong academic reputations. She is interested in studying neuroscience, psychology or sociology.

In the meantime, Claire’s high school days are filled to the brim.

“We don’t usually get home until 10 p.m., so if we don’t have that two-hour block in between for homework, Claire ends up having late nights,” Isabelle

said. “It has been a study in time management, playing year-round soccer along with football. She will come to a point where she is physically too tired to do what she needs to do, so she will ask for a day of rest. Her coaches understand that and don’t push her past her physical limitations.”