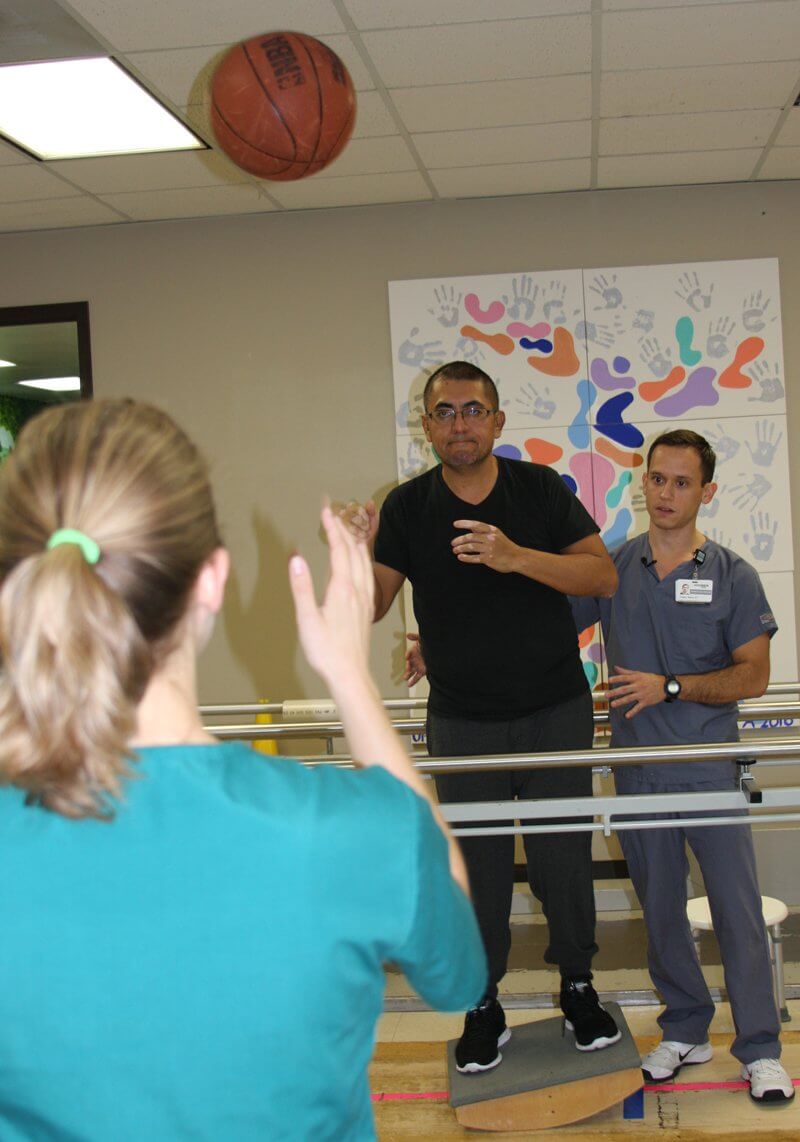 Slightly swaying side to side and front to back on a swivel board shows how far Ruben Arellano has come since the removal of a baseball-sized brain tumor. With a light hand on Arellano’s back and one on his shoulder, physical therapist Jorge Neira makes sure he’s exercising correctly and doesn’t get hurt.

In Arellano’s first attempt, he couldn’t even stand. Nearly three weeks into his rehabilitation, he not only balances on the board, but he’s able to catch and strongly toss a basketball during an intense rehab session at Harris Health System’s Quentin Mease Hospital.

The achievement might seem simple, but for Arellano, it marks a high point in his recovery. Following a body-crippling seizure in late October, the 47-year-old was taken to Harris Health’s Ben Taub Hospital where surgeons removed the benign tumor (an intraventricular meningioma) that was damaging his brain and threatening his life.

“They saved me,” Arellano says while fighting back tears, a side-effect of the tumor that renders him overly emotional at times. “Now, they’re helping me walk and live my life again.”

Another effect—which rehab is addressing—is Arellano’s major loss of function on his left side. His work with the highly-trained team from the hospital’s Physical Medicine and Rehabilitation Department is ongoing, and everyone, including Arellano, is confident he’ll regain full body function and mobility.

“It was like his brain didn’t know how to control his arm and leg even with good underlying strength,” says Neira, also a doctor of physical therapy. “As a result, his balance was significantly affected when he tried to walk or when he performed any task using his left arm.”

Neira explains that functions like the ability to walk require several body components working together. Expert rehabilitation helps patients relearn actions like shifting weight side to side, using core body muscles to lift and extend legs to create motion and walk.

“Seeing small improvements that a patient may not see, but I see means the world to a therapist,” says Neira, who sees himself as a mentor and coach for patients wanting to achieve goals of independent living. “If my patient accomplishes these goals, then it’s success for me.”

Arellano’s rehab has been remarkable. His improvements allowed staff to discharge him home in time to enjoy most of the holidays. He still visits the hospital for rehabilitation, but the bulk of his therapy is done on his own at home.

“It’s on me to get it done and believe me, I’m going to get it done,” Arellano adds. “This is my army of angels and I’m grateful for everything they’ve done for me. It was my daughter’s birthday when I first came to the hospital (Oct. 29). I told her, ‘Your birthday gift that day was a new dad and a better life for me.’”

Hearing such a commitment from Arellano is what Neira says drives him to keep helping patients. A native of Laredo, Texas, he says he always wanted to help others.

“Treating patients at Harris Health and in Houston excited me because I felt like I would be able to give back to those who remind me of home,” he says, adding that his proficiency in Spanish and knowledge of Hispanic culture are pluses. “I love working here, I love treating people who are similar to those in Laredo, regardless of race or ethnicity. I feel like I can give back to that population, and that’s what inspires and motivates me.”

Quentin Mease Hospital is certified by the Commission on Accreditation of Rehabilitation Facilities (CARF), a premier authority on physical medicine and rehabilitation programs worldwide. Quentin Mease boasts a success rate of 81 percent compared to 77 percent nationwide of helping patients resume productive lives after life-changing medical conditions like stroke and spinal cord injuries or traumas like vehicular and industrial accidents.