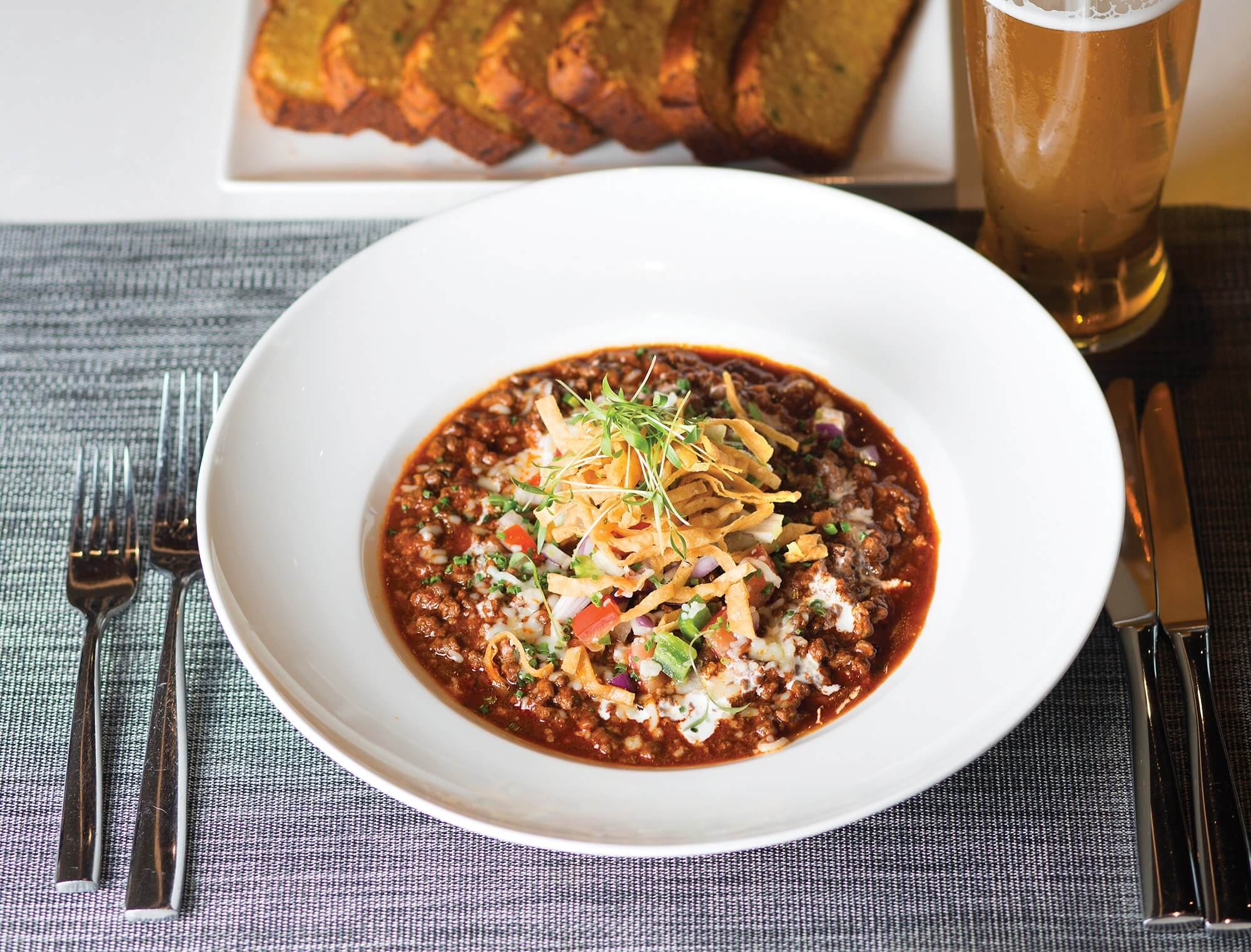 The Super Bowl is a great excuse to gather with family and friends and enjoy some tasty food.

It’s definitely not a day for dieting.

In recent years, the U.S. Department of Agriculture determined that Super Bowl game day is the biggest food consumption day in America after Thanksgiving.

Fans watching at home can easily down 2,400 calories and 121 grams of fat in one sitting, dietitians say.

“For the average-size person not working out, that is more than they should eat for the whole day,” said Melissa Markofski, Ph.D., an assistant professor in the Department of Health and Human Performance at the University of Houston. “Plus, the foods are calorically dense, like bowls of chips, dips, wings and nachos, all the tasty calorie-bomb stuff.”

Although sports fans often crave warm and meaty fare, there are ways to sneak fresh ingredients into your Super Bowl snacks and even a little exercise into game day.

“Chili is so versatile,” said Jon Buchanan, executive chef of Third Coast restaurant in the Texas Medical Center. “It can sit in the middle of the Super Bowl spread or be a side dish.”

To wow the crowd, he suggests making it as much from scratch as possible, using fresh ingredients such as chili peppers instead of chili powder. Buchanan likes to use ground beef tenderloin scraps in his recipe, but for those looking for leaner choices he suggests turkey, ground chicken or venison.

“You can also put out a number of fresh condiments like peppers, onions, cilantro and tortilla strips,” Buchanan said. “Or put out hot dogs for chili dogs, or put out bags of Fritos for Frito pie.”

For those who don’t want meat in their chili, Nicole Cornelious, a clinical dietitian with Memorial Hermann Heart & Vascular Institute-Texas Medical Center, suggests replacing meat with beans or another plant-based protein, which lessens the amount of cholesterol and fat. Not a fan of beans, or want something extra? Try adding a whole grain like barley, which offers texture and is a great source of fiber.

Other great meat substitutions include savory grilled vegetable kabobs or grilled fruit kabobs, Cornelious said. She also likes to trade out beef for portobello mushrooms or black bean burgers. For die-hard beef eaters, she suggests a leaner beef like sirloin.

“If you like pizza, don’t add meat or cheese,” she said. “Really, it is the meat and the cheese that is loaded with fat and salt that is making the food worse for you.”

Cornelious and Markofski both recommend taking standing breaks during commercials or even going outside to throw a football around during the Super Bowl. Or, when a player makes a touchdown, drop to the floor and do as many pushups as the score of the winning team.

“Try to make it fun, like whoever can do the most jumping jacks in a certain period of time can have the recliner when the game comes back on,” Cornelious said.

Instead of spreading food out in front of the television, Markofski recommends keeping the food in the kitchen so people have to get up and walk for it. Trick everyone into thinking they’re filling up by using smaller plates. And because soda and alcohol have so many calories, keep plenty of water on hand so people can rehydrate and reduce calories at the same time.

“One day of eating like this isn’t going to give you heart disease,” says Markofski, who studies the effects of exercise and nutrition on muscle function and biomarkers associated with disease risk. “But a continued pattern of eating foods high in fat and carbohydrates is not helping your risk.”

In a hot Dutch oven, brown the ground beef in two tablespoons of canola oil. Remove browned meat from the pot, strain the oil and set aside. Next, in the remaining oil, add the chilis, onion, garlic and red bell peppers and cook until caramelized. Add the tomatoes and cook until they begin to break down (about five minutes). Next, add beer and bring to a simmer. Once the vegetables are cooked through, remove from heat and purée in a blender until smooth. Strain the vegetable purée through a fine strainer to remove any seeds or solids. Last, add the ground beef and purée back into the pot, season with salt and pepper, bring to a simmer and cook until the beef is very tender. Top with pico de gallo, avocado, tortilla strips and sour cream.