Breakdown of the new VICIS helmet 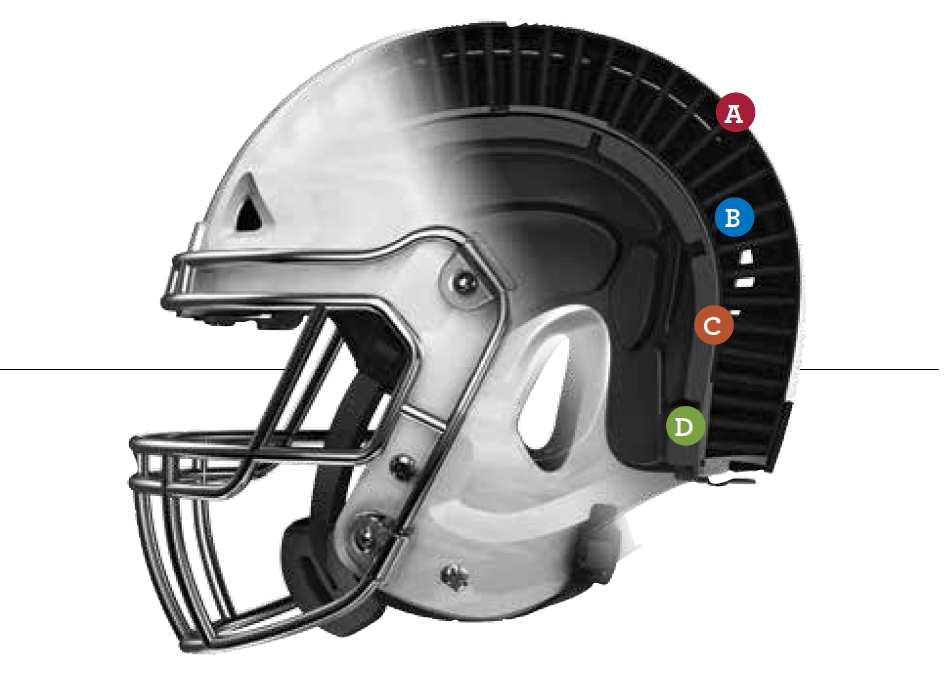 Inside the four layers of the VICIS ZERO1 helmet:

A LODE SHELL | Softer shell absorbs impact load by deforming like a car bumper, then bouncing back.

B CORE LAYER | An inch-and-a-half-thick layer of vertical struts bend and buckle to slow down impact forces.

Sam Browd, M.D., a pediatric neurosurgeon, was saddened by the many young athletes he had to “retire” from sports participation due to concussions.

As head of the Seattle Sports Concussion Program at Seattle Children’s Hospital and an independent neurological consultant for the Seattle Seahawks, Browd wanted to keep athletes in the game.

So he approached Per Rainfall, Ph.D., chair of the University of Washington’s mechanical engineering department, to explore new helmet designs. Together, they brought in Dave Marver, an entrepreneur and veteran of the medical technology industry, and launched VICIS Inc. in 2013.

Four years later, the company is ready to put its football helmet on the heads of athletes in the National Football League and the National Collegiate Athletic Association.

The ZERO1 helmet, created for high school play and above, aims to slow the forces of impact from several directions using multiple layers of protective material. The helmet retails for $1,500, about five times the price of an average adult football helmet.

“The design of football helmets hasn’t changed for 40 years—a hard outer shell with foam padding inside,” Marver explained. “The ZERO1 is a completely new approach to helmet design. The helmet’s multiple layers are designed to work together to provide improved impact absorption and a comfortable, anatomically optimized fit.”

Unlike traditional helmets with hard exterior shells, the outer shell of the ZERO1 works like a car bumper, giving way during a collision and returning rapidly to its form in time for the next impact. The process slows impact forces in milliseconds and is invisible to the naked eye, Marver said.

Although the ZERO1 helmet cannot prevent concussions, a core layer of polymer columns inside the new helmet has been specifically calibrated to respond to impact velocities found in elite levels of football.

“While the ZERO1 features certain materials that have never before been used in football helmets, most of the performance and safety advantages derive from the helmet’s sophisticated structure,” Marver said. “Generally, we selected materials that were extremely durable and maintained their properties at a wide range of temperatures.”

The helmet had a trial run last August with players from the University of Washington and the University of Oregon football teams. Because of issues with fit and comfort—the ZERO1 is a little heavier than traditional football helmets—VICIS pulled the helmet back to refine a few features. Some of the players experienced forehead pressure, so VICIS added padding in the front of the helmet. VICIS also reinforced the chin strap.

The new helmet comes at a time when the number of concussions reported in NFL games is still on the rise. In January 2016, the NFL reported that the number of diagnosed concussions had grown by 32 percent in 2015; the 271 total includes preseason and regular season games, as well as practices.

Multiple concussions can lead to chronic traumatic encephalopathy (CTE), a degenerative disease of the brain that has afflicted several NFL players, including Frank Gifford, Ken Stabler, Junior Seau, Tyler Sash and Mike Webster, the Pittsburgh Steeler whose brain was autopsied by neuropathologist Dr. Bennett Omalu. Omalu’s revelations about football and CTE were featured in the 2015 film Concusssion, starring Will Smith.

VICIS has performed tens of thousands of impact tests on the ZERO1 helmet, both internally and through independent labs, Marver said. The helmet has already been certified as compliant with the National Operating Committee for Standards on Athletic Equipment. The company has also conducted extensive on-field testing, some of which informed key improvements made in the final stages of product development, Marver said.

“Elite players and the expert staff who advise them, like equipment managers and athletic trainers, are eager to explore new technologies that promise improved safety,” he said. “They have actively and generously provided guidance during our development process and are encouraged by our design and ongoing test results. This sport is ready for a new and improved helmet.”