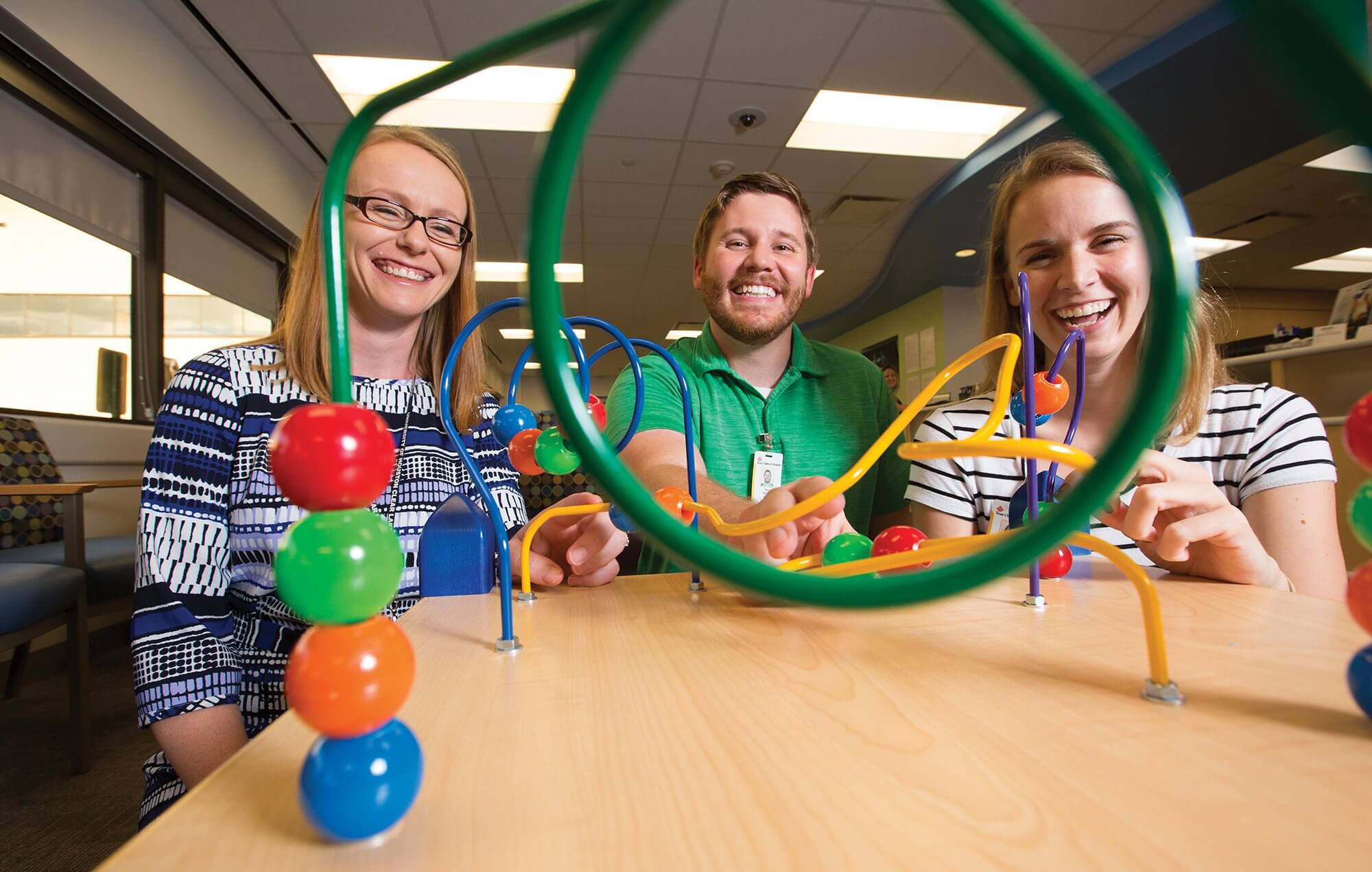 One in 2,000. Just three decades ago, that was the prevalence of an autism diagnosis. Today, according to data collected from the Centers for Disease Control and Prevention, one in 68 children will be diagnosed with autism spectrum disorder by 8 years of age.

The numbers are alarming, but experts incite caution: a vast majority of this surge can be explained by increasing diagnoses—credited to a broadened definition and growing awareness—rather than a rise in cases. And while there is an ever-growing body of research focused on potential origins or triggers for the disorder (including genetic factors and exposure to environmental toxins), it is still unclear what, exactly, causes autism spectrum disorder.

One thing is certain: autism spectrum disorder can be exceptionally difficult for children and their families. But early intervention and a commitment to therapies has been shown to improve symptoms and enhance quality of life.

Autism is a neurodevelopmental disorder characterized by impaired verbal and nonverbal communication skills, social difficulties and repetitive behaviors. Individuals “on the spectrum” may be affected in vastly different ways. Symptoms include: struggling with empathy; an inability to regulate emotions, manifesting in outbursts and self-injurious behaviors such as biting, head banging and hitting; arranging and rearranging objects; repeating sounds and phrases; and extreme interest in a specific subject. Many individuals with autism have extraordinary talents in arts, music and academics, while others may deal with significant disabilities, including the inability to communicate verbally.

Most cases of autism are diagnosed in childhood, as early as 18 months, and empirical evidence unequivocally states that the earlier a child begins therapy, the more effective it will be. These therapies range from occupational and speech therapy to social skills classes, psychotherapy, and even horseback riding or restrictive diets. Perhaps the most effective therapy, especially in treating emotional regulation and problem behavior, is applied behavior analysis, or ABA. The problem is, many insurance companies don’t cover it.

ABA is a scientifically-supported approach to evaluating behavior and understanding how environmental and circumstantial factors contribute to that behavior. In the context of autism, ABA focuses on treating problem behavior by discovering the root cause and providing individuals an alternative means of managing their reactions. And it can make a dramatic difference.

“The assessment methodology for ABA has been around for over 30 years, and there is a lot of evidence to show that this is a very effective approach,” said Jennifer Fritz, Ph.D., associate professor of behavior analysis at the University of Houston-Clear Lake. Fritz and two graduate students travel to The Autism Center at Texas Children’s Hospital each week to provide ABA therapy to patients there.

Historically, The Autism Center focused primarily on diagnostic evaluation and follow-up care for children with autism spectrum disorders, but over the past few years, program leaders became increasingly interested in offering treatment and intervention opportunities for their patients and families, which led to the partnership between the Center and the University.

“We are invested in providing evidence-based care, and applied behavior analysis is the most evidence-based intervention available,” explained Leandra Berry, Ph.D., a pediatric neuropsychologist and associate director of clinical services at the Autism Center. “It takes the knowledge about how people learn, and the value of rewarding and reinforcing behavior, and applies that to help promote gains in various skills and reduce problem behavior.”

Bolstering desired behavior (rather than punishing bad behavior) could be considered the foundation for applied behavior analysis. When ABA therapists like Fritz and her students first meet with a family, their initial objective is to identify what kind of problems the child is facing and how they’ve been able to manage those behaviors. ABA therapists narrow their focus to the areas of greatest concern, such as injurious behaviors, and then try to assess why they occur, setting up different situations the child might face at home or in school that may trigger that behavior. They ask questions like: What are the factors that prompt the behavior? What does the behavior itself look like? What happens that probably functions to reward or encourage that behavior? Once the cause is determined, the therapists design alternative coping and communication tools centered on reinforcement-based strategies.

“Take, for example, biting,” Fritz said. “If we notice that is happening when the child is asked to do something difficult that he doesn’t want to do, we teach the child to ask for a break or we help caregivers figure out ways to make the situation less difficult. Or if it’s happening when a parent is busy, we teach the child to ask appropriately for attention, or we work with parents on strategies that will allow them to provide more of the attention the  child wants.”

In addition to addressing difficult behavior, ABA can help improve language and communication skills, social skills, including eye contact and conversation, academic and learning skills, as well as play, feeding and self-care.

But it takes time.

That commitment is a major part of ABA’s success, as is the other hallmark of the therapy—parental involvement. ABA therapists are not only teaching patients, they’re counseling parents as well, training them to implement ABA strategies and principles at home and in the community so that treatment doesn’t stop when the therapy session is over.

“You see the most progress and really the best results when the parents are working in concert with the therapists, almost as co-therapists,” Berry said.

Since The Autism Center began offering applied behavior analysis therapy to patients in 2015, Fritz and her students have served 27 patients, with a 98 percent success rate. Berry said she is thrilled to offer these services for her patients at the Center, especially since most of them would not be able to access ABA therapy otherwise.

“Not only do Medicaid and CHIP [Children’s Heatlh Insurance Program] plans not pay for ABA therapy in Texas, but many private insurances don’t cover ABA either,” Berry said. “If you look at the law, it suggests that most private insurances should cover it, but there are loopholes and exceptions.”

Federal guidelines set forth by  the Centers for Medicare & Medicaid Services (CMS) require states to provide coverage for medically necessary therapy services, but many insurance companies, including Texas Medicaid, dispute ABA as “medically necessary.” They argue that it is just one of several treatments listed by CMS and, therefore, redundant if others—including speech, physical or occupational therapy—can be accessed. Texas also failed to pass a bill requiring the licensure of behavioral therapists, and then cited their lack of credentialing as a reason to deny coverage. In addition, lawmakers approved a provision in the state budget that called for $350 million worth of cuts in pediatric therapy services.

Berry encourages parents and providers to lobby the legislature in Texas to change the law so that Medicaid, CHIP and private insurers are all required to cover ABA—and, perhaps most importantly, remove the current loopholes that exempt them from doing so.

“This is a huge, huge problem that is probably one of the biggest issues we face,” Berry said. “Here in our clinic, we know it is effective intervention and we recommend it, but families have such a hard time accessing it.”