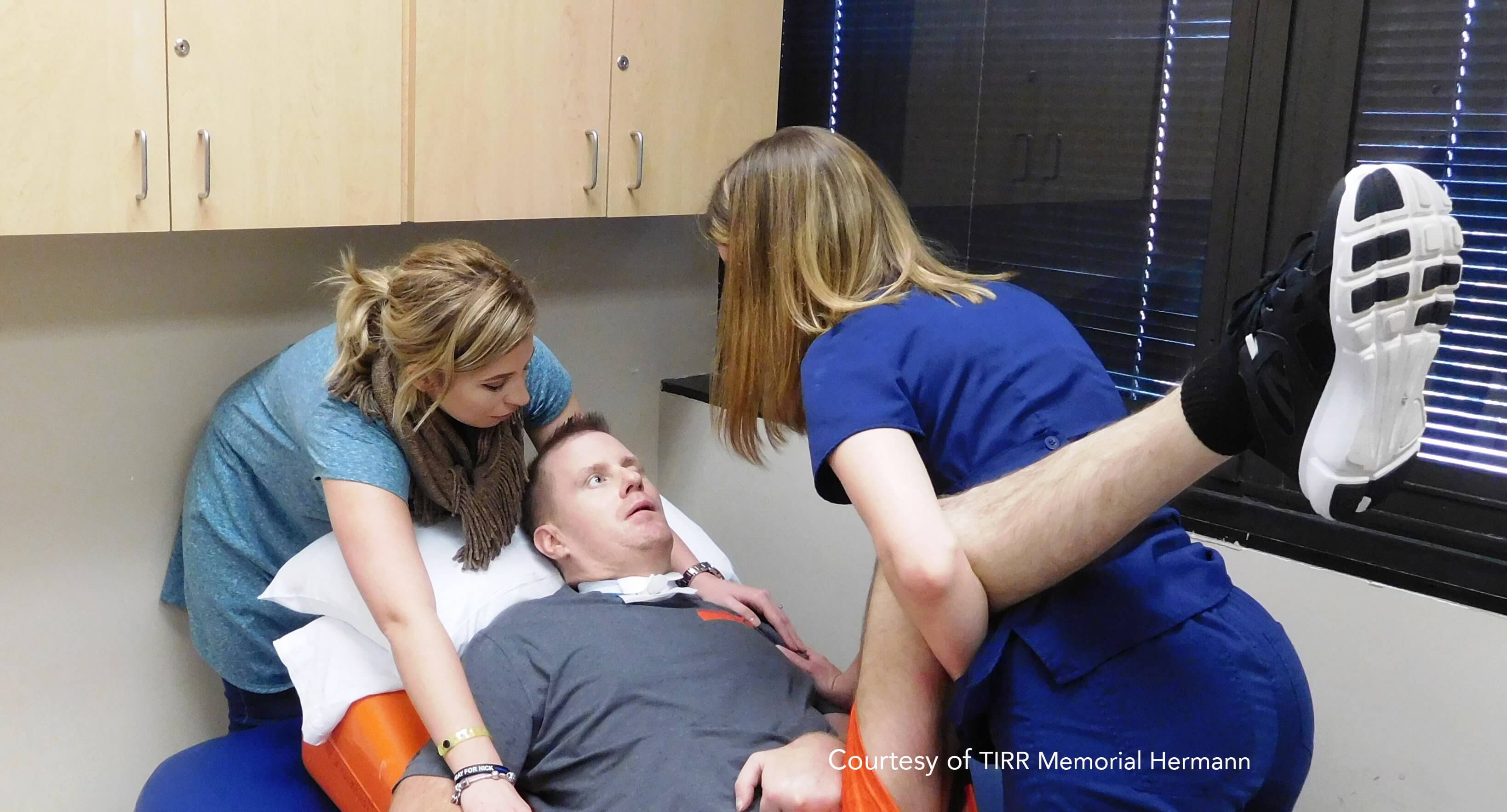 While many people are looking forward to the upcoming holidays, the father of wounded Baton Rouge deputy Nick Tullier believes “Christmas has definitely come early,” thanks to the care his son received at TIRR Memorial Hermann.

East Baton Rouge Deputy Nick Tullier, 41, was one of six Baton Rouge police officers shot during a July 17 ambush attack that left three dead and three critically injured. Tullier sustained life-threatening gunshot wounds to the head, abdomen and shoulder. Doctors stabilized Tullier at the Our Lady of the Lake Regional Medical Center in Louisiana, where he received intensive treatment for four months before transferring to TIRR Memorial Hermann Nov. 16 to begin specialized rehabilitation therapy at the hospital’s Disorders of Consciousness Program.

“Heroes and doctors in Baton Rouge saved Nick’s life that day, but thanks to TIRR Memorial Hermann here in Houston, because they’re aggressive working to give Nick his life back,” Nick Tullier’s father James Tullier said during a press conference Thursday.

Tullier’s physician, Sunil Kothari, M.D., medical director of the Disorders of Consciousness Program at TIRR Memorial Hermann and assistant professor of physical medicine and rehabilitation at Baylor College of Medicine, originally expected Tullier to remain in a vegetative state, but soon after his arrival at TIRR Memorial Hermann, it became clear that he was fully conscious.

However, Tullier’s issues did not end with consciousness, Kothari said. He and his team would also need to address the severe impairments to Tullier’s bodily functions, such as paralysis and spasticity.

“Our patients have bodies and they can be fully conscious, but if they can’t control their body, if their body is not available for them when they regain consciousness, they will be unable to do anything in the world,” Kothari said. “In Nick’s case, his mind and his body are out of sync with each other.”

The gunshot wound caused Tullier to go into cardiac arrest, which prevented oxygen from flowing to his brain. Prolonged lack of oxygen to the brain, called anoxic brain injury, coupled with the extensive traumatic brain damage to the left side of his brain, left him in serious, life-threatening condition and exposed him to a host of physical and cognitive disabilities.

“We know he’s going to face challenges. No one recovers from this severe brain injury completely,” Kothari said. “The question is how challenged will they be both from a cognitive thinking point of view and a physical point of view.”

Despite the severity of Tullier’s injuries, Kothari said he is “doing remarkably well” and exceeding the team’s expectations.

“We feel that we have a pretty good sense, based on our experience, of how people do,” Kothari said. “Even for us we feel that he is outstripping our expectations. … Given all of that and his condition, we are surprised at his capacities and progress to date.”

Tullier continues to experience spasticity throughout his body and paralysis in some limbs, but despite the physical challenges that constrict his mobility, he remains active.

Tullier undergoes three to four hours of physical, occupational, speech and music therapy every day to improve his spasticity, partial paralysis and neurological functions. He is now able to read, hear and respond to questions by moving his head forward for “yes” and turning his head right for “no.” He can move his left arm, hand and parts of his legs.

While his recovery is far from complete, Tullier’s journey is a testament to his family’s unwavering faith, the hospital’s exceptional care and his will to fight for survival.

“Nick’s got a real long way to go. We know that. We understand that, but Nick’s a fighter,” James said. “What’s in Nick’s future? Look at what’s been in Nick’s past. We had no hope. Nick wasn’t supposed to survive one day, two days, five days [or] three weeks, but look where he’s at.”

Throughout Tullier’s journey, his family has dedicated the Facebook page “Nick Tullier Strong” to providing the public with updates on his progress, and many have used the platform to send their prayers and well wishes, hoping for good news.

“Some people have asked us a number of times, ‘Is Nick a miracle? Is he going to be a miracle?’” James said. “To us, yes, Nick’s a miracle.”