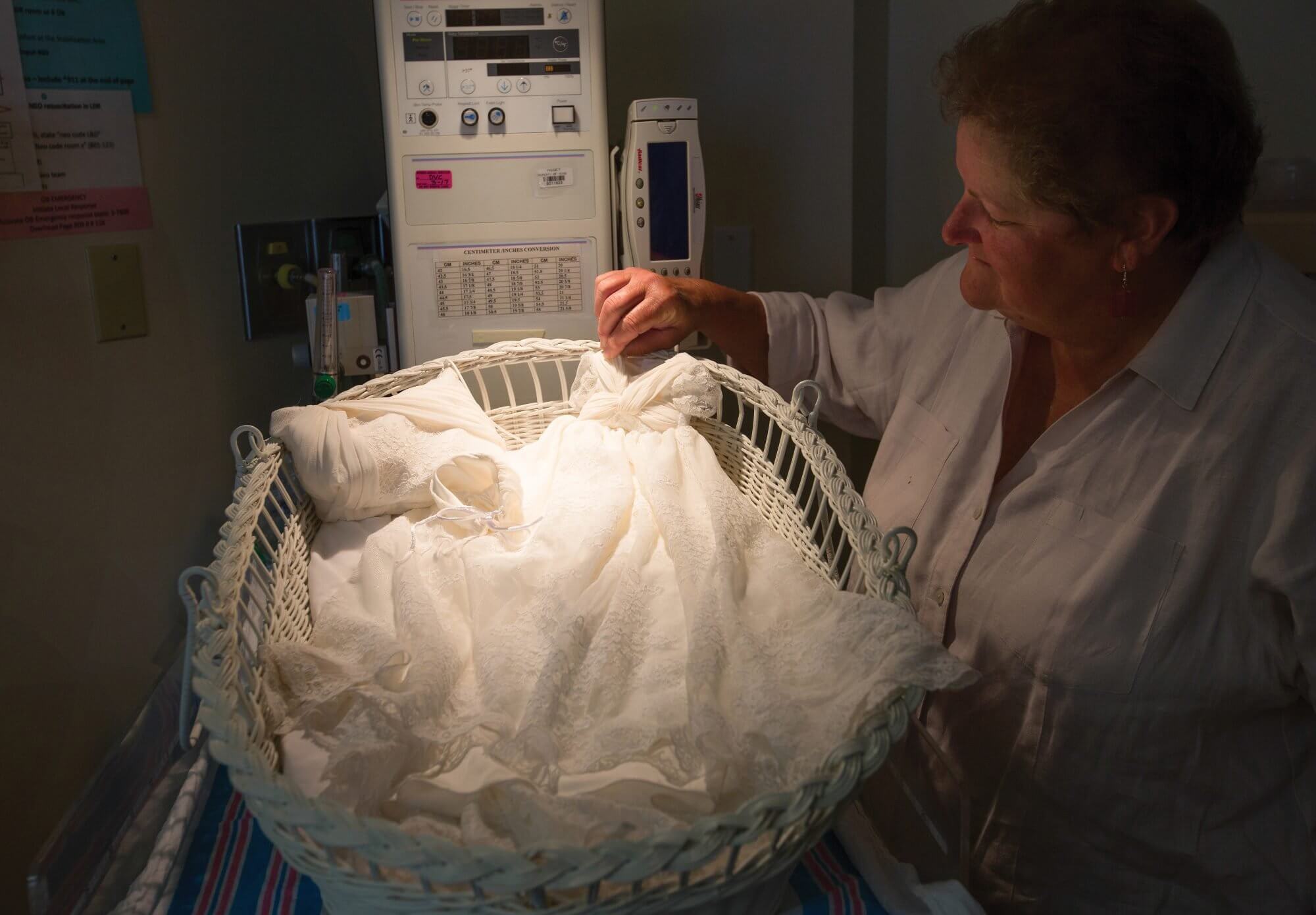 I was married June 7, 2014 in a sweetheart wedding gown layered with lace and sheer chiffon. It was not my first marriage, but such is the wreckage of life.

As the sun broiled and sank into the horizon, we said our vows, toasted and danced—the night burst with promise and the hem of my white gown was swept up in the euphoria  of a crowded, dirty dance floor. My husband and I spent the next seven days winding through the dirt roads  of Central America, then flew back to Houston hand-in-hand to a reality we already loved. The following Saturday, with slight apprehension and a mixture of warm tap water and Dawn, I soaked the bottom of my wedding dress in our kitchen sink and watched as the russet color faded back to white. It was bittersweet, rinsing away hours of bliss.

A year and a few months later, after my amniotic fluid had fallen to levels considered dangerously low, surgeons delivered our daughter four and a half weeks early via Cesarean section. For nine days we lived in the NICU, holding her tiny body to our bare chests, all three of us tangled in wires and tubes. My husband and I hummed lullabies, cheered as she reached critical milestones, and described to her in gratuitous detail the crazy, magnificent world that we hoped would be hers.

Today, our lives are filled with the squeals of a healthy toddler, her smile so vast it fills her face, dimples sitting on each end like permanent exclamation points.

It is as if she knows how lucky we are.

Two days before our daughter’s first birthday, I drove to Katy, Texas, to meet with Diane Dionne. Draped across the back seat was my wedding dress.

Dionne runs a nonprofit that provides burial gowns for babies who die either before, during or shortly after birth. The gowns are crafted from donated formal dresses once steeped in happiness: the thrill of a prom, a brother-in-law’s raucous toast, the promise of a future filled with love. For something as tragic as the loss of a new life, the fabric from these dresses offers a small caress, a moment of grace amid interminable heartbreak.

Dionne was inspired to start her nonprofit after her own daughter lost a baby girl. The day after the baby died, Dionne drove her daughter to the mall in search of a burial garment for the tiny body. Through tears, mother and daughter drifted through department stores crowded with the hallmarks of happy consumerism: pop music, perfume, ads plastered with smiles. After hours of shopping, Dionne’s daughter finally settled on a set of doll clothes.

“They were made in China, with  no love at all,” Dionne said. “To this  day, she won’t set foot in those stores.  It makes me feel good to know we’re helping families so they’re not having to go through what my daughter had to go through. The pain does not go away.”

Modeled after a national organization with the same mission, Angel Gowns by Diane is based out of the apartment Dionne shares with her husband and their yellow lab, Angel, and includes a network of seamstresses throughout the greater Houston area. Donations have been flown in from  as far away as Scotland, and thanks to multiple drop-off sites around the city, Dionne has managed to stuff two storage units full of dresses.

To date, the group has sewn and distributed more than 10,000 garments.

Working off patterns while trading tips and scraps, the volunteers meet frequently for “sew-ins.” Besides gowns, they also sew outfits with vests and caps for boys, as well as small square wraps for babies who are born too small for clothing. Every piece is left open in the back because the babies, for a heartbreaking list of reasons, are often difficult to dress.

The organization accepts donations of all kinds—any color, pattern or material, even fabric covered in the logo of a sports team. After all, this is the only opportunity these parents will ever have to pick an outfit for their child.

After final stitches and finishing touches, the gowns are donated to NICUs and labor and delivery units throughout the city, as well as to local funeral homes and, occasionally, to families who reach out to Dionne directly. Each garment from Angel Gowns by Diane is donated free of charge. The organization is also pursuing partnerships with local carpenters and funeral homes—to coordinate donated coffins and memorial services—in addition to photographers, florists, and anyone else whose services may prove helpful.

I arrived at Lindy Bingham’s house on a Wednesday in early October to watch as her tailor’s shears sliced my wedding dress into pieces. Another Angel Gowns volunteer, Emily Rivaux, joined her at the sewing table.

Unlike the other seamstresses, Bingham, who has been sewing since she was 8 years old, eschews patterns, opting to design her outfits freestyle instead.

“I’m kind of a rogue,” Bingham explained, as she smoothed my dress onto her cutting mat and counted the grids—one, two, three, four—before carefully cutting off the bottom half.

“We’ll use this for one of the gowns so it has a little train,” she said, placing a long swatch of material aside.

In less than an hour, she sewed gathering stitches along the top of the swatch to create a waist. Then she set to work on the bodice, carefully preserving the knotted chiffon in the front. Soon she was cupping a strip of lace  in her hands and molding it into a tiny puff sleeve.

As her sewing machine hummed, a doe-eyed black-and-white cocker spaniel lay under her feet.

“I’m allergic,” Bingham said between sniffles. “But we’ll keep her until we can find a suitable home. She’s a good dog.”

Bingham motioned for me to join her at the sewing table so she could show me what was left of the back of my dress. The zipper part, she said, would be perfect for a little bag. She likes to make these for the mothers so they have something tangible to take home, something that could hold a few photographs and sonograms.

“Have you heard of rainbow babies?” Bingham asked. “I didn’t know about it until I started doing Angel Gowns, but it’s after you’ve suffered a loss and then you are able to have a successful pregnancy. I’m actually a rainbow baby myself—my sister and I are.”

Bingham explained that her mother’s first baby passed away, and her parents had only planned to have  two children.

In a sense, life itself could be considered a series of deaths. Relationships break up, friendships wane, moments become memories. We often find ourselves at the ends of chapters and milestones. People we love die. But there are rainbows after storms and people like Dionne and Bingham, who remind us that even in the midst of tragedy, there is love in this world.

On Nov. 2, Bingham and Rivaux entered the labor and delivery unit at Harris Health System’s Ben Taub Hospital with what became of my dress in hand. In the end, it provided enough material for two gowns, each with a matching bonnet and keepsake bag.

Gloria Ramirez-Scully, a registered nurse in the labor and delivery unit who is deeply involved in the bereavement program, accepted the donation on behalf of the hospital.

“It’s a very difficult subject,” Ramirez-Scully said. “Losing a loved one is never easy, especially when it is  a baby. There are a lot of emotions, and helping these moms cope with it as best they can and find some closure—that’s our goal.”

There is nothing in the world that can alleviate the pain of a knotted umbilical cord or erase the silence of a sonogram unaccompanied by a heartbeat. Still, Ramirez-Scully and her team try. Angel Gowns tries. They dress the babies, they take pictures of the babies in the gowns, they try with the hope that, eventually, their efforts will ease the suffering of parents faced with an unspeakable loss.

“This is the only time they will  ever be able to hold their baby or see their baby, and the gowns are special because they can take this picture back home with them,” Ramirez-Scully said. “It helps them to cope and to say, ‘Yes, I had this baby and I carried it for however long. It did not survive, but this is a memory I have of this child who was a part of our lives but who didn’t get to grow up.’”