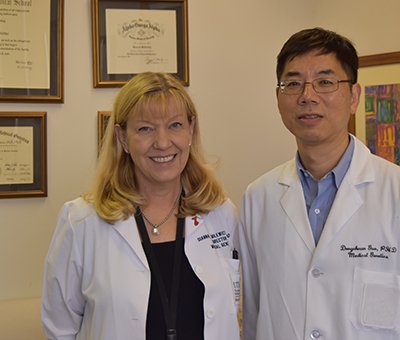 A genetic discovery by a team led by Dianna Milewicz, M.D., Ph.D., could help explain a cause of a mysterious artery-damaging disease that may affect up to an estimated 5 million Americans and often strikes without warning.

Scientists at The University of Texas Health Science Center at Houston (UTHealth) have identified gene alterations that cause this arterial disease called fibromuscular dysplasia or FMD. The research appeared in The American Journal of Human Genetics.

“This is an important step in understanding the underlying molecular mechanisms of this unexplained and puzzling condition that often affects women,” said Milewicz, the study’s senior author and director of medical genetics in the Department of Internal Medicine at McGovern Medical School at UTHealth. “The finding is a critical step in developing treatments.”

“When we compared the chromosome sequence of family members with and without Grange syndrome, we identified mutations in a gene, called YY1AP1, in affected individuals,” said Dongchuan Guo, Ph.D., the study’s lead author and an associate professor of medical genetics in the Department of Internal Medicine at McGovern Medical School.

“This is a good example of how the investigation of a very rare genetic condition that has been identified in only a few individuals can lead to a better understanding of a more common medical problem such as FMD, which may benefit a broader population,” said Dorothy K. Grange, M.D., one of the study’s co-authors and a professor of pediatrics at Washington University School of Medicine.

When doctors suspect a person has FMD, they typically order imaging to see if they can locate the narrowed artery or arteries. While there is no cure, in severe cases, doctors insert tiny wires or catheters into the blood vessels to widen them.

“Diagnosis and treatment of patients with FMD remains a clinical challenge. The recent discovery of Dr. Milewicz and her team is a significant leap toward better understanding of the causative factors in this mysterious disease,” said Ali Azizzadeh, M.D., chief of vascular and endovascular surgery at McGovern Medical School and a member of the Memorial Hermann Heart & Vascular Institute-Texas Medical Center.

“YY1AP1 mutations predispose to vascular lesions characteristic of FMD, thus indicating that FMD can result from mutations in a single gene,” the authors wrote. “Thus, these data provide insight into the pathogenesis of FMD, an unusual and poorly understood vascular disease.”

Milewicz is the President George Bush Chair in Cardiovascular Medicine and the director of the John Ritter Research Program in Aortic and Vascular Diseases at UTHealth. She is also the co-director of the M.D./Ph.D. Program at The University of Texas Graduate School of Biomedical Sciences at Houston, which is operated by UTHealth and The University of Texas MD Anderson Cancer Center.