Team CATAPULT is on a mission to turn disability into capability 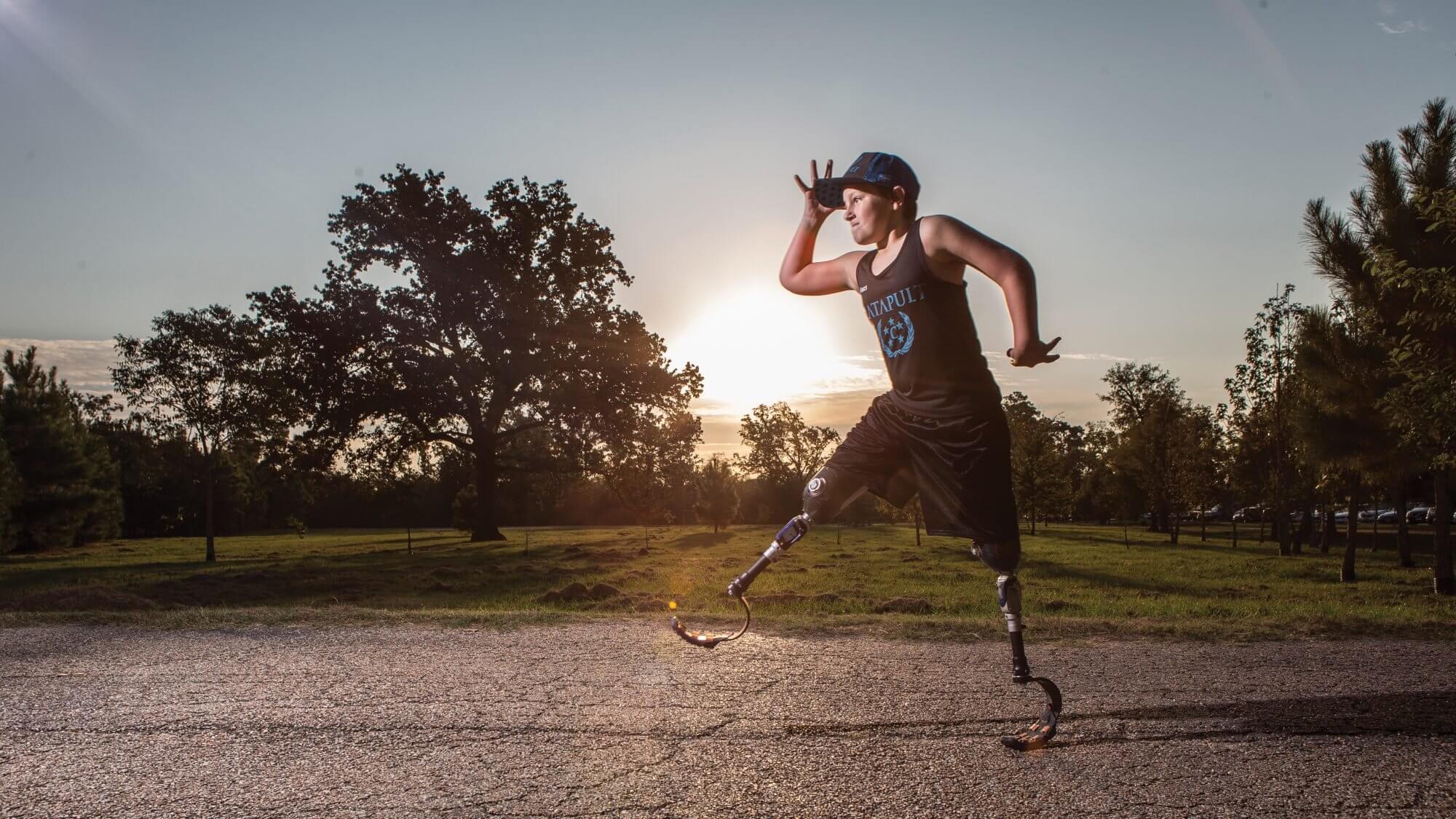 Jessica Callahan grips the end of the green tether, waiting for her guide to tell her it’s time. Soon, she and her guide, Allison Fowler, are running in tandem, their feet a steady metronome on the gravel. Callahan focuses on her steps, the give and take of the rubberized resistance band, the exuberance she feels as she flies down the path. The sun, rising, slices through the trees, and all around her the city is waking up. She knows Memorial Park is crowded, and she knows her teammates are close, but she cannot see any of it.

Born five months premature, before her retinas had time to fully attach, Callahan has been blind her entire life. But the 30-year-old Fairfield, California native, who lived in an incubator and was “touch and go” until she was four months old, fought through.

She’s been fighting ever since.

Callahan is training for January’s Aramco Houston Half Marathon, with plans to race in the Chevron Houston Marathon in 2018. She runs with the help of guides through the nonprofit organization CATAPULT, which supports physically challenged individuals who wish to compete in running and endurance sports.

“Everybody is very encouraging,” Callahan said. “There’s a certain camaraderie in the running community, and CATAPULT makes us feel safe. They’re really looking out for us.”

CATAPULT was founded in 2015 by two Houston-area triathletes, Chris McClendon and Jarrett Hubert. The two men were already working with visually-impaired runners when they identified an overwhelming need for a local organization dedicated to athletes with multiple types of physical challenges. Shortly thereafter, they recruited Paralympian Mark Barr, who placed fourth in the first Paralympic Triathlon event in Rio in October, to help coach. A trauma-surgical ICU nurse at Harris Health System’s Ben Taub Hospital, Barr lost his right leg to osteosarcoma when he was 14.

CATAPULT’s mission is to provide full access to endurance sports to any individual working to overcome a physical challenge—no matter their skill set. Athletes range from new amputees and those who have no experience running to aspiring Paralympians. Through training, hands-on coaching and education, CATAPULT volunteers share their own love for sport.

“I think a lot of physically challenged individuals don’t realize their capabilities, so we’re raising awareness,” said McClendon, president of the organization. “We’re saying, ‘We’re here to turn your disability into a capability.’”

Central to CATAPULT’s mission is fundraising. Not only can race entry fees and travel expenses add up, but purchasing the prostheses needed to compete can sometimes feel like an insurmountable hurdle. Running prostheses, deemed medically unnecessary by insurance companies and therefore rarely covered, can run upwards of $20,000 each.

“Having access to the right equipment is obviously pretty crucial for these individuals,” Barr said, “so we made that a priority.”

This past summer, a local family reached out to CATAPULT for help with their son, Calder Hodge, a double amputee. Hodge, now 11, dreams of playing in the NFL, but he only owned fixed blades that did not bend at the knee, creating excess strain on his  hips. After brainstorming fundraising options, CATAPULT decided to put together their first-ever annual 5K, with the inaugural race benefiting new prosthetic knee components for Hodge. Through social media and marketing, the group created quite a buzz.

“A lot of people got excited about it and were sharing it,” McClendon said. “Through that process, an anonymous donor walked into the Hanger Clinic and covered the entire bill for both of his knees.”

That act of generosity allowed CATAPULT to send Hodge and his family to camps to learn how to use his new prosthetics.

“It was great seeing the community come together like that for him,” McClendon said. “It’s why we do what we do.”

Twenty-six-year-old Patrick Pressgrove, who lost his legs when he was 13, said the organization’s support has opened up an entirely new world for him.

“About a year ago, CATAPULT sponsored me to run in a 5K, and I wouldn’t have been able to afford it myself,” he said. “That really meant a lot to me, and that was my first race ever. Now they tell me anything I want to compete in, they’ll try their best to help me out.”

Like Callahan, Pressgrove is training for the half marathon in January. Twice a week, he and other runners gather at Memorial Park with a group of CATAPULT athletes and coaches to practice. Invariably, the sessions evolve into more than running.

“What we’re doing goes beyond the track,” said Hubert, CEO of the organization. “It’s providing a social network and an outlet.”

Recently, McClendon celebrated his birthday at Mo’s… A Place for Steaks before it closed its doors in late October. Callahan, a musician and vocalist who began a recording career when she was just 13, spent her evenings there at the piano. The night ended with the CATAPULT team standing around her as she played, all of them singing together in unison.

Mark Barr’s drive and determination as a triathlete and CATAPULT coach have also had a profound effect on the group. For some, life has grown richer after losing a limb.

“Mark really showed me more  of what’s possible as an amputee,” Pressgrove said. “So far in my life, I’ve done more as an amputee than I’d ever done before. Between his help and their sponsorship, my life’s going uphill now.”

Barr occupies a unique role. As an elite athlete, he carries a wealth of knowledge about physical health and nutrition, some of it specific to individuals who have lost limbs. As a trauma nurse, he provides care to new amputees, often serving as a source of inspiration.

In February, a well-known Houston-area triathlete, Adessa Ellis Blankenship, was struck by a car while riding her bike during a training session for her seventh IRONMAN. Her injuries were so extensive that her physicians later said she had less than a one percent chance of survival. Blankenship was transferred by Memorial Hermann Life Flight to the Memorial Hermann Red Duke Trauma Institute where, thanks to swift work on the part of the trauma team, she survived. After eight months of surgeries, she was finally in a place where she could see a future—and it involved running.

Her lower left leg, however, posed a problem. It had been hit with such force during the accident that mud was embedded in the marrow, triggering persistent infections and the subsequent cutting away of more and more bone. There was no guarantee she would ever recover full function and, after weeks of deliberating, she ultimately made the difficult decision to amputate.

Nils Fowler, a CATAPULT guide, was one of Blankenship’s primary nurses during part of her recovery. After hearing of her amputation, he immediately connected her with Barr, who, along with several other members of the team, paid Blankenship a visit. They spent hours in her hospital room, answering question after question, and when the group finally left, Blankenship’s new dream had solidified: Tokyo 2020 Paralympics.

One of CATAPULT’s hopes is that through their organization, events like the Houston Marathon will cater increasingly to athletes with physical challenges.

“On race day, there’s going to be nearly 30,000 people,” said Fowler,  who is blind in his right eye and has a keen understanding of some of the challenges CATAPULT runners face. “Last year, it was very chaotic. We try to have one person in front, one behind, and then a guide, and still people with headphones try to run through the tethers. At the end of the day, though, if the athlete can’t get to the finish line, then you didn’t do your job.”

CATAPULT wants to showcase Houston as an accessible city for disabled athletes.

“Jarrett and I have been in the triathlon and running community for so long, and we personally know a lot of these race directors and they’re all willing to work with us,” McClendon said.

Fifteen CATAPULT runners have signed up to race the marathon or half marathon on Jan. 15. Their goals are the same as any runner’s: to cross that finish line and be handed a medal, to share with the other exhausted athletes an overwhelming sense of pride and accomplishment.