Put a Bow On It: Why TMC Employees Wear Bow Ties

Put a Bow On It: Why TMC Employees Wear Bow Ties 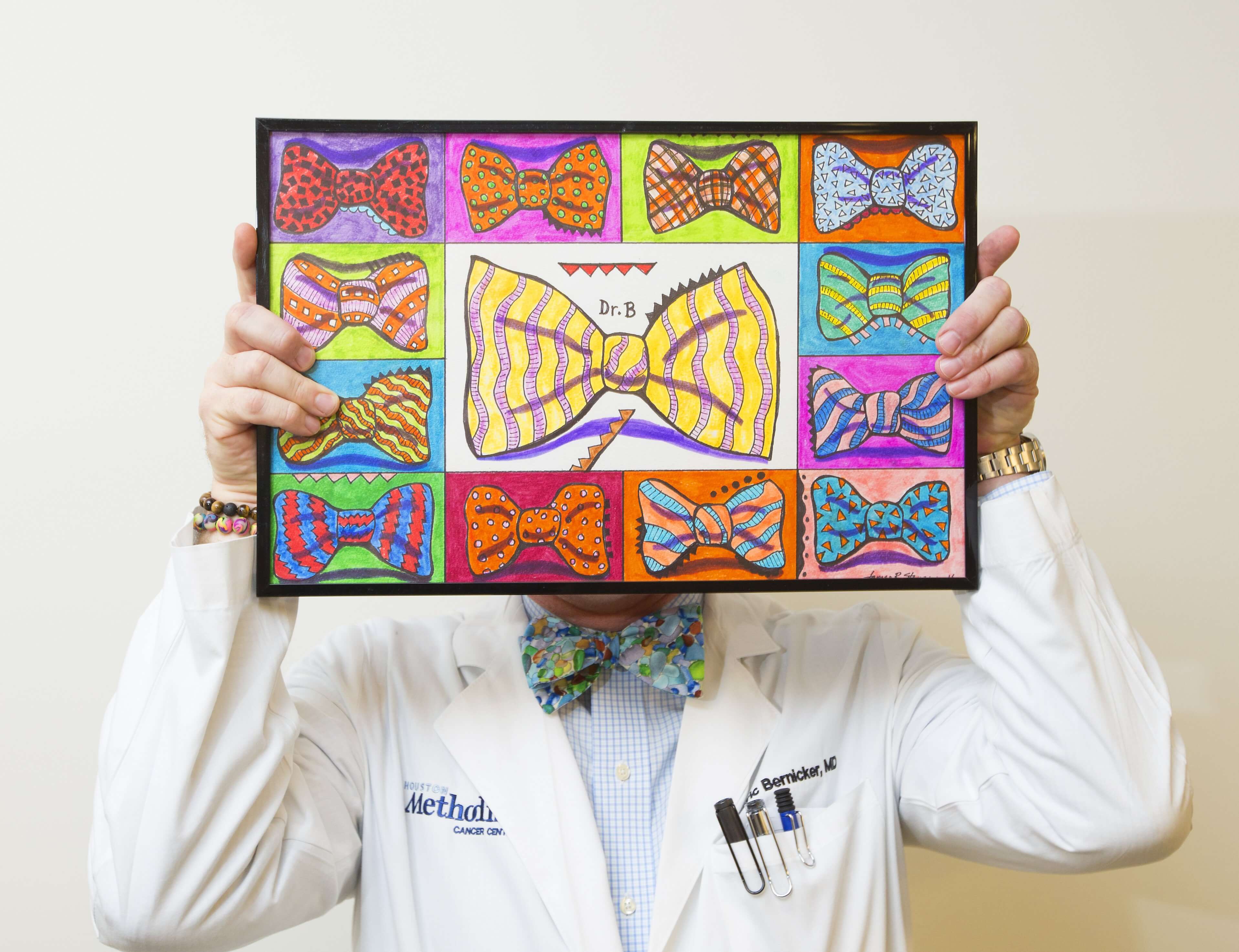 Thanks to a new wave of geek chic, bow ties are mainstays in the modern man’s wardrobe. A bow tie is a statement piece that exudes whimsy while still maintaining professionalism and gravitas. That delicate balance is what compels many Texas Medical Center employees to forgo the traditional tie and join the party of ardent bow tie aficionados. An added benefit: bow ties prevent occupational hazards. 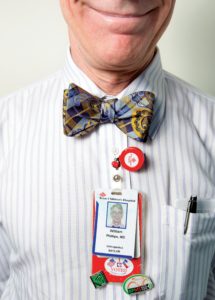 As a surgeon, William Phillips is extremely dexterous with his hands. It’s a skill that comes in handy when he ties knots for sutures and bow ties.

Long ties posed a problem for Phillips early in his career. During his residency, he was working an emergency room shift when a patient arrived with a broken hip she sustained during a violent fit induced by alcohol withdrawal.

“She became mad and combative and grabbed my necktie,” Phillips said. “I began to choke.”

After that, he wore nothing but bow ties.

William A. Phillips, M.D., is a pediatric orthopedic surgeon at Texas Children’s Hospital. 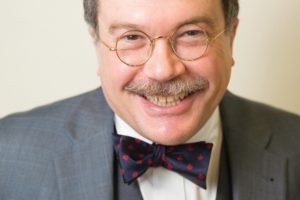 Peter Hotez’s fondness for bow ties has earned him the nickname “Bono with a bow tie,” a sobriquet the doctor has done nothing to disavow.

Hotez made the conversion from neckties to bow ties in the early 1990s, when he became a new faculty member at Yale University.

Neckties were quite wide then, so he started wearing bow ties to augment his stature.

He ventured into the Owl Shop, an old tobacco store next to the university, and asked the proprietor to teach him how to tie a bow tie.

When he ties his bow ties, Hotez aims for imperfection. A rakishly-tied bow tie proves that it’s not a clip-on and that he tied it himself.

“I can actually do it without a mirror now,” Hotez said.

Peter J. Hotez, M.D., Ph.D., is dean of the National School of Tropical Medicine at Baylor College of Medicine and president of the Sabin Vaccine Institute. 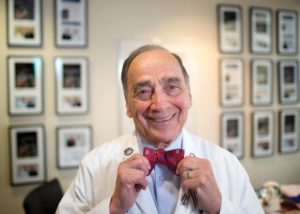 Decades ago, people used to dress a little more formally than they do now. Early on, Stanley Appel’s uniform consisted of a button-down shirt and a long tie. It was a sharp look, but during a human anatomy course as a first-year medical student, he quickly learned it wasn’t the best choice of neck wear.

“I leaned over the cadaver and it soaked up all the chemicals and liquids,” Appel said. “I’ve not worn long ties since then.”

Today, Appel’s signature look is a colorful bow tie paired with his beloved cowboy boots. When he moved to Houston, he started wearing cowboy boots because they provided his flat feet with support. 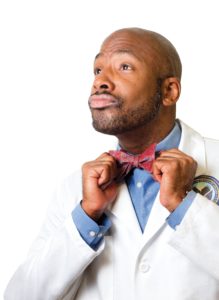 Daryl Shorter made the transition from the traditional long tie to the bow tie seven years ago.

“I’ve always appreciated bow ties, but never thought I had sartorial license to go there until recently … when I decided to be more daring from a fashion standpoint,” Shorter said.

Once bow ties came back into fashion, Shorter took the plunge and never looked back.

“It started out with just one bow tie—a multi-colored black, silver, pink and gold striped bow tie,” he said. “It’s loud and funky, but I really love that tie. Once I figured out how to tie it, I was hooked.”

As a researcher, Shorter doesn’t wear a bow tie every day. But when he does, he prefers to complete the look.

“If you’re going to bring the bow tie,” he said, “then accompanying it with the appropriate pocket square is critical.”

Daryl Ishaq Shorter, M.D., is an assistant professor of psychiatry research at Baylor College of Medicine. 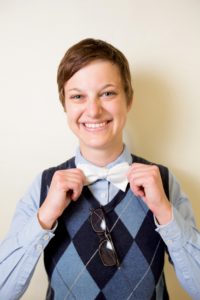 For Holland Manon Kaplan, bow ties are “a fun way to look more formal, but whimsical at the same time.”

While bow ties are traditionally a menswear accessory, she has the type of personality that can pull one off.

“I think bow tie-wearing people are very much fun-loving people,” Kaplan said. “If someone’s wearing a bow tie in a not-so-formal setting, you know they’re going to be fun and interesting. You just know.”

She favors the satin white bow tie her fiancée gave her for their one-year anniversary and looks forward to growing her collection with the addition of the one she’ll wear to her wedding in April.

Holland Manon Kaplan is a medical student at Baylor College of Medicine. 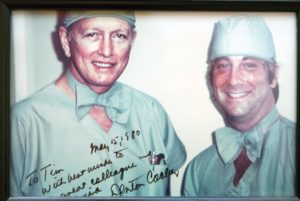 When Tim Garson was a student at Princeton University, he managed the Princeton Triangle Club, a touring musical comedy show. Every night, Garson had to wear a tuxedo to the show and to the after-party. Because he simply couldn’t fathom wearing a clip-on bow tie the whole night, he decided he needed to learn how to properly tie a bow tie.

As a fellow at Baylor College of Medicine, Garson delivered a presentation to an audience of 200, which included renowned heart surgeon Denton A. Cooley, M.D., Garson’s chief of pediatric cardiology Dan
McNamara, M.D., and all of the surgical staff and fellows. Garson wore an unusual outfit: a shirt with large yellow and blue checks and a bow tie made of blue jeans with the word “Yes” emblazoned upon it. The get-up captured the attention of Drs. Cooley and McNamara, serving as a source of amusement during
the presentation.

“Being a first-year, brand new fellow, I took my tie off, put it in an envelope and wrote Dr. Cooley, whom I had never met: ‘Dear Dr. Cooley, I understand you like my shirt and tie. I would have given you both, but the sleeves on the shirt would have been too short. Signed, Dr. Garson.’”

In return, Cooley gave Garson his long tie with a note: ‘Dear Tim, thanks so much for the tie. I’ve left you mine. It’s one of my favorites. Maybe if you wear it, it’ll make you look older.’

Years later, Garson had a pair of scrubs made into a bow tie for Cooley’s 60th birthday and attached a note to the gift that read: ‘Dear Dr. Cooley, maybe if you wear this, it’ll make you look younger.’

Arthur “Tim” Garson, M.D., is director of the Health Policy Institute at the Texas Medical Center. 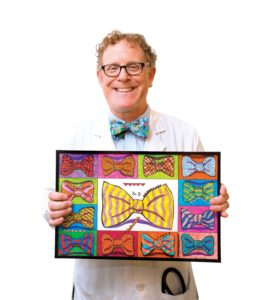 A framed, hand-drawn painting of colorful bow ties hangs in Eric Bernicker’s office. A patient gave it to him as a token of her appreciation, as well as for his recognizable look.

“I’m sure I initially started doing it because I was pseudo-intellectual and eccentric, and I thought it was different. It just became a thing,” said Bernicker, a thoracic oncologist. “Now, if I don’t wear the bow ties, the patients get really pissed.”

His collection of multicolored, sometimes psychedelic bow ties reflects his personality: friendly and droll, yet intelligent and respectable.

Bernicker finds that a bow tie can offer levity to a solemn situation.

“I spend a lot of my time giving people really bad news,” Bernicker said. “It’s not so much that the bow tie can take away from the fact that I’ll tell someone they have metastatic cancer, but it cheers a lot of patients up.” 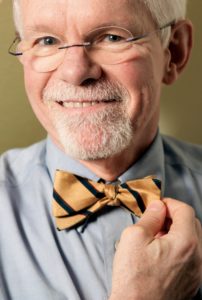 George Mallory dates his love for bow ties back to the beginning of his pediatric internship in June 1974. He has amassed a trove of approximately 90 bow ties, and is unconcerned about their long association with geeky, bookwormish types.

“Pediatricians are probably not threatened by the possibility that someone might conclude that they’re nerds. There’s a little bit more self-acceptance here,” Mallory said. “We don’t really have to prove our masculinity, but there’s a very practical reason to wear a bow tie: I’ve never had my tie peed or pooped on in my career.”

He, along with many other physicians, abandoned long ties after a British study reported that long ties carried bacteria capable of causing disease.

“The bow tie was the obvious solution to good taste and infection control,” Mallory said.

Mallory is very particular about a well-tied bow tie. Clip-ons are bush league and lazy and a beautifully imperfect, slightly tousled bow is key to show he’s the real deal.

“I abhor the idea of a pre-tied bow tie,” he said.

George Mallory, M.D., is a pediatric pulmonologist at Texas Children’s Hospital and founder of the TCH Lung Transplant Program. 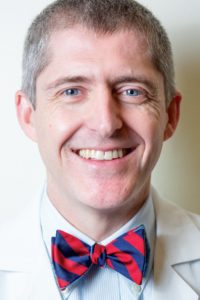 As an officer in the United States Air Force Medical Corps, Benjamin Smith wore the standard camouflage military uniform every day for four years. Except for church and the occasional formal event, he rarely had a chance to accessorize with the one or two bow ties he owned.

But it was a look he always liked.

“I’m pretty nerdy at baseline and I’ve tried to come up with a look that optimizes the professorial
quality and minimizes the nerdiness, so the bow tie seems to work reasonably well for me,” Smith said.

When he joined MD Anderson in 2010 as a breast radiation oncologist, his bow tie collection quickly expanded—due to function rather than fashion.

“I always lean over patients when examining them, so long ties are a real pain in the rear,” Smith said. “When I’m examining somebody, oftentimes they’ve had surgery, so they’re at risk for infection. You don’t want your clothing being bathed in staph aureus or communicating staph aureus.” 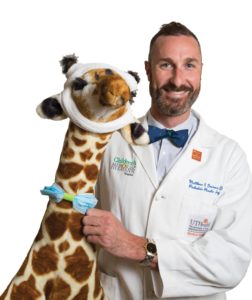 Matthew Greives’ office is decorated with plastic models of skulls and skull wall art. The interior design isn’t a tribute to the macabre, but rather a reminder of the work Greives does as a plastic surgeon specializing in craniofacial reconstruction.

Patients and colleagues shower him with skull paraphernalia, including skull bow ties.

Grieves was inspired to wear bow ties about a decade ago when he was still a medical student and learning from veteran craniofacial surgeons who often wore them.

“What sold me, particularly, was doing pediatrics,” he said. “Every time I would go in and see a cute little one-year-old or two-year-old, I’d try to get up close to do an exam in their mouth and they would grab my tie and yank it. You only have to be strangled by a two-year-old once or twice before you’re like, ‘I can’t
wear this!’”

Because he works with children, Greives also has plenty of stuffed animals in his office. Some of them wear bow ties, too.