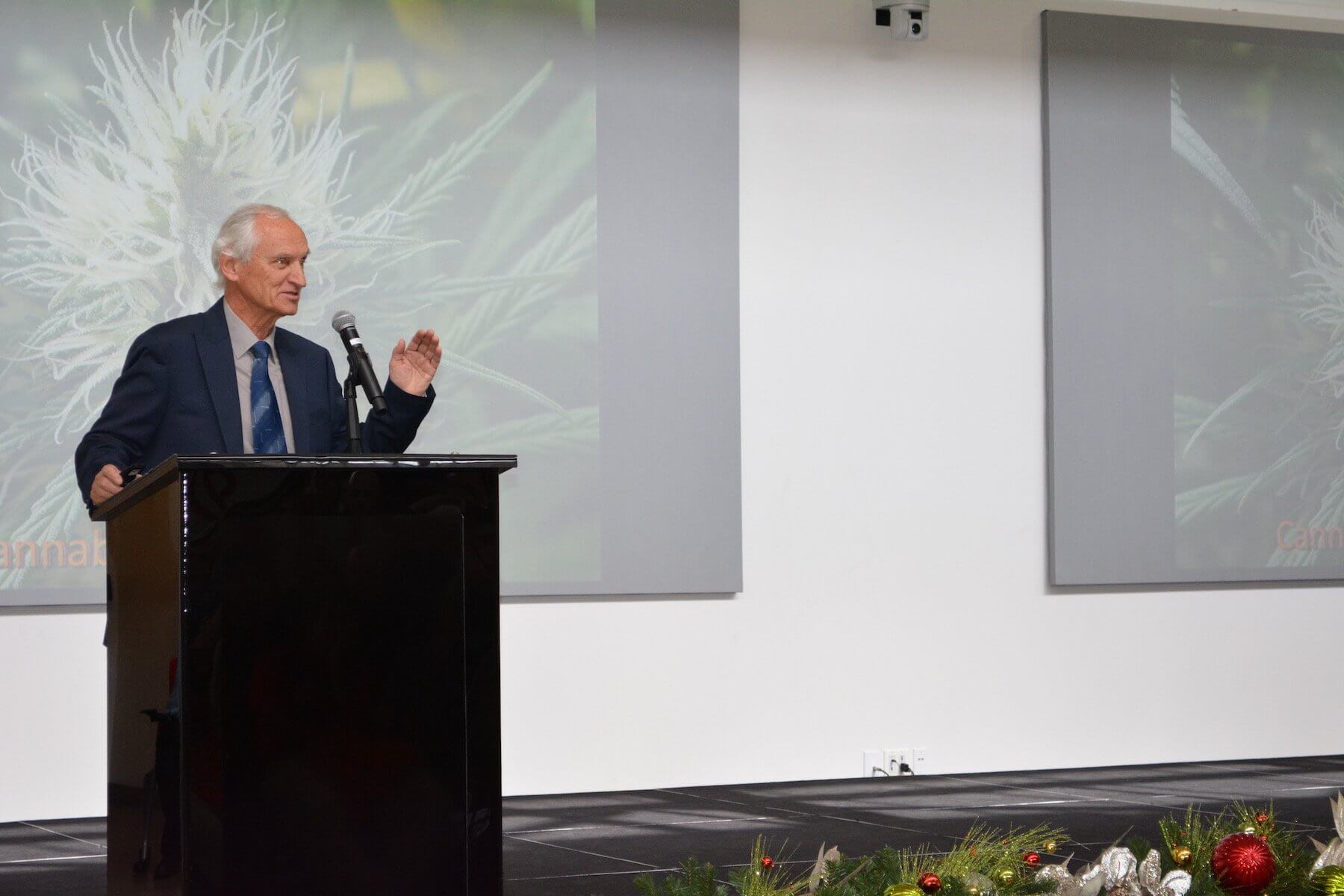 Nearly 200 people gathered at the Texas Medical Center’s Innovation Institute this week to build an intellectual debate around medical cannabis.

Lumír Hanuš, Ph.D., delivered the keynote address at the event hosted by Vyripharm Biopharmaceuticals. Hanuš discussed medical cannabis as a successful medicine. He worked on a team of researchers, led by Israeli chemist Raphael Mechoulam, a pioneer of cannabis research, that discovered the endocannabinoid system in animals and humans. That included the synthesis of the cannabis sativa plant and isolating endocannabinoid receptors in the brain, nervous system, liver and spleen.

“Cannabis is a wonderful medicine, but of course, it is no panacea or miracle drug,” Hanuš said.

While their research showed cannabis could perform well as a medicine, he cautioned that it “doesn’t treat everything, everyone, every disease or every stage of disease.” But it has been shown to help reduce the effects of some diseases, including epilepsy, Tourette Syndrome and diseases involving muscle stiffness. It also relieves side effects of anti-cancer drugs, such as nausea.

Despite more than 120,000 medical references—not all positive—to cannabis or cannabinoids, relatively few clinical trials are underway due to the stigmatization of cannabis, Hanuš said.

That is one of the reasons why Vyripharm Biopharmaceuticals, located in the TMC Innovation institute’s TMCx+ incubator space, wanted to inform attendees about the scientific evidence and efficacy of medicinal cannabis in treating debilitating diseases.

Vyripharm is championing the expansion of the Texas Compassionate Use Act, signed into law on June 1, 2015, that requires the state to license at least three “dispensing organizations” for these cannabis-based drugs by Sept. 1, 2017.  The law also requires that doctors prescribing the drugs join a physician registry and share information about dosages and administration.

The company hopes to play a role as a contractor in this initiative assisting with setting the standards and guidelines for companies involved in the Compassionate Use Act.

Other speakers included Richard Ford, M.D., Ph.D., pathologist and professor of pathology at The University of Texas MD Anderson Cancer Center, and his colleague, Lan Pham, Ph.D., assistant professor in hematopathology, who spoke about cannabis research related to cancer. Also presenting were Nick Etten, executive director of the Veterans Cannabis Project, and Tori Strong, Ph.D., a patent examiner for the U.S. Patent and Trademark Office.

Strong spoke of the benefits and challenges regarding the intellectual property of medical cannabis. He said there are fewer than 100 patents in this space, which leaves room for new technology.

“Innovation is a thriving force that could expand medical cannabis,” Strong said.