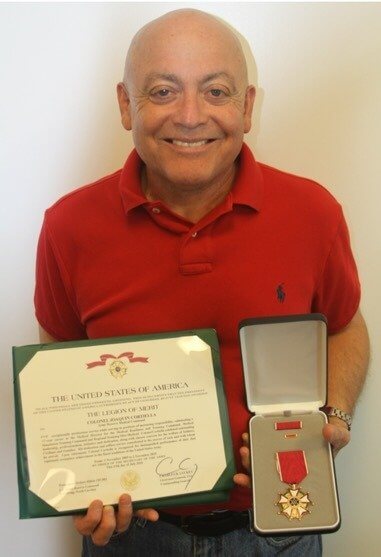 For Dr. Joaquin Cortiella, it’s all about teamwork. From saving soldiers at war to building bioengineered lungs at work, teamwork is the constant driver of his success.

So, it was only fitting for the pediatric anesthesiologist and U.S. Army Colonel to point to others when he recently accepted the U.S. military’s prestigious Legion of Merit award at Fort Sam Houston in San Antonio.

“I’m very proud and honored to receive this award,” Cortiella said. “But it’s always been about the team. It’s not so much an individual award to me; the things that I have accomplished came as a result of working with others. Whenever we completed a successful mission, it was because of a number of people, not individuals.”

The Legion of Merit is given to members of the U.S. Armed Forces, as well as to military and political figures of foreign nations, who provide “exceptionally meritorious service.” It’s one of the U.S. military’s most distinguished awards, ranking just below the Silver Star. It and the Medal of Honor are the only two decorations issued as neck wear.

Cortiella originally enlisted in the Army Reserves Medical Corp in 1997. After obtaining his MD degree from Boston University, completing a master’s degree in public health from Harvard, and working with some of the best physicians in the Boston area, he decided it was time to give back.

“I had gotten all this training at important institutions in Boston. I said ‘I’m pretty good at this stuff, and the people out there fighting for our country should get the best,’” Cortiella said. His decision became even more personal in 2001. “I enlisted before 9/11—but when a good friend of mine died in the second tower in the World Trade Center, it then became even more important to me that I had joined.”

Cortiella’s 17 years in the Army Reserves took him all over the world, including Kuwait, Bolivia, Guatemala, Honduras, Panama, Haiti and Iraq. He learned to stay calm and treat patients while mortar rounds flew overhead—and he learned that to do a good job, it takes a team.

He was first deployed to Kosovo in 2000, serving as an anesthesiologist for the 399th Combat Support Hospital. The main function of the support hospitals, which are made up of a series of climate-controlled tents, is to treat traumatic injuries that require surgery and stabilize the wounded for transport to a fixed medical facility.

“The 399th had a lot of good people that went in there for similar reasons,” said Cortiella. “I will never forget sitting in a C-130 airplane and realizing that all of a sudden we were going into war. But for all of us to get out of our comfort zones and perform up to a level that anyone could be proud of—it was amazing to be part of that. I’d do it again without even thinking twice.”

Cortiella earned many awards throughout the years, including the Bronze Star in 2007 for his service in Iraq. But in 2010, he had to shift his focus to the home front, after a mass in his chest was detected during a deployment in Iraq. He came home and received treatment for thymoma, a rare tumor of the thymus. However, treating the tumor led to pulmonary fibrosis. Cortiella knows he’ll need a lung transplant someday, but he stays too busy to dwell on it.

In addition to providing patient care and conducting research with Joan Nichols, PhD—which he says, hopefully, may lead to a transplant in a human being made from a bioengineered lung in the next 5 to 10 years—Cortiella has played a key role in developing simulator training for reservists and troops going overseas.

Since 2008, he has been assigned to the Medical Readiness Training Command. He directs the Command’s simulator training exercise, which prepares deploying Combat Support Hospitals for theater-specific injuries using scenarios and advanced medical simulators at the Mayo Clinic in Rochester, Minn.

“We wanted to focus their training on specific things they would see,” said Cortiella. “For instance, we knew that IEDs [improvised explosive devices] are very common and lead to orthopedic and neurosurgical injuries, as opposed to trauma that is chest-related. You don’t see bullet wounds as often. By preparing the hospital personnel for the types of casualties they’re likely to experience during their mission, we could identify weaknesses pre-deployment and bring everyone up to speed before heading into a warzone.”

Cortiella says his involvement with the training is part of the reason he received the Legion of Merit. But even then, it took a group of people to make it a success.

“Everything I do—building lungs, providing patient care, developing training for reservists going overseas—it’s not just one person, it’s many of us working together toward achieving a common goal,” he said.