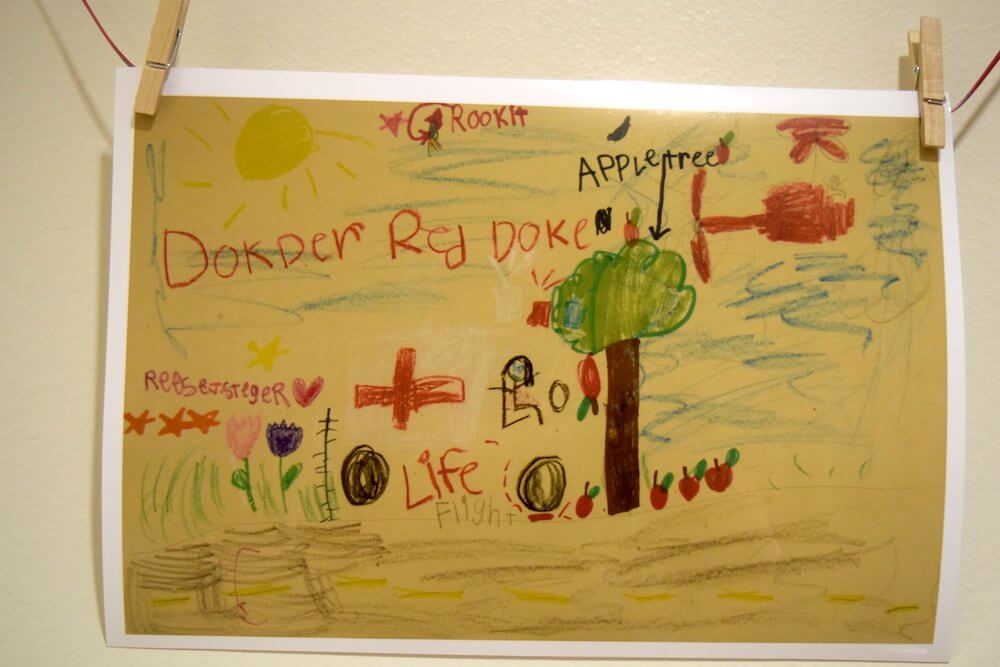 The drawings were passed along to Duke after the dedication ceremony and he kept them. In September 2016, a little more than a year after his death, one of his daughters, Sara, went through his boxes and discovered the collection wrapped in a bundle and tied with a ribbon.

“I knew instantly that it was a treasure,” she said.

The students were too young at the time to appreciate the contributions Duke made to the Houston and Texas community, and simply knew him as the man for whom their school was named, Vannoy said.

She, on the other hand, has a more personal connection to the iconic surgeon.

As a Houston native, Vannoy often watched Duke on television and was familiar with his work. But a few years ago, Vannoy’s sister Amy was in a terrible car accident in which she sustained life-threatening injuries and required immediate medical attention.

“Time stops,” Vannoy said. “All you can think about is two things: without Life Flight she could die and … thank God she’s Life Flight-ed because now she has a chance to live.”

Vannoy’s sister survived the wreck thanks to Life Flight.

“I know how important this man was and why he’s important to our school,” Vannoy said. “That day I told my students the story about Dr. Duke, the Life Flight helicopter, my sister and we drew pictures … because through a simple drawing, that moment in time, they knew the importance of who he was and why our school was named after him.”

Duke died of natural causes on Aug, 25, 2015, at Memorial Hermann Hospital. He was 86. Remembered for his talent, compassion and leadership—as well as his bushy mustache and wire-rimmed glasses—Duke has been hailed as “one of our country’s great doctors” by Memorial Hermann Health System president and CEO Dan Wolterman. 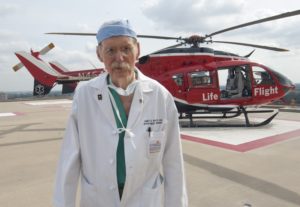 Duke was born in Ennis, Texas, on Nov. 16, 1928. His family relocated 40 miles away to Hillsboro, Texas, where he spent his youth hunting, fishing, digging ditches and becoming an Eagle Scout. During his childhood, he earned the nickname “Red” because of his curly reddish hair, and he befriended a fellow red-headed Texan, Willie Nelson.

Duke later attended Texas A&M University and graduated with his Bachelor of Science degree in 1950, before joining the United States Army for two years in Germany during the Korean War. After his time in the military, he decided to pursue a career in medicine and earned his medical degree from The University of Texas Southwestern Medical School in Dallas. While completing his general surgery residency in 1963, he tended to Texas Gov. John Connally on the day of President John F. Kennedy’s assassination.

In 1976, Duke established Life Flight and served as its medical director for 39 years. Currently, Life Flight has completed more than 140,000 life-saving missions and continues to operate 24 hours a day, 365 days a year, serving a 150-mile radius of Memorial Hermann.