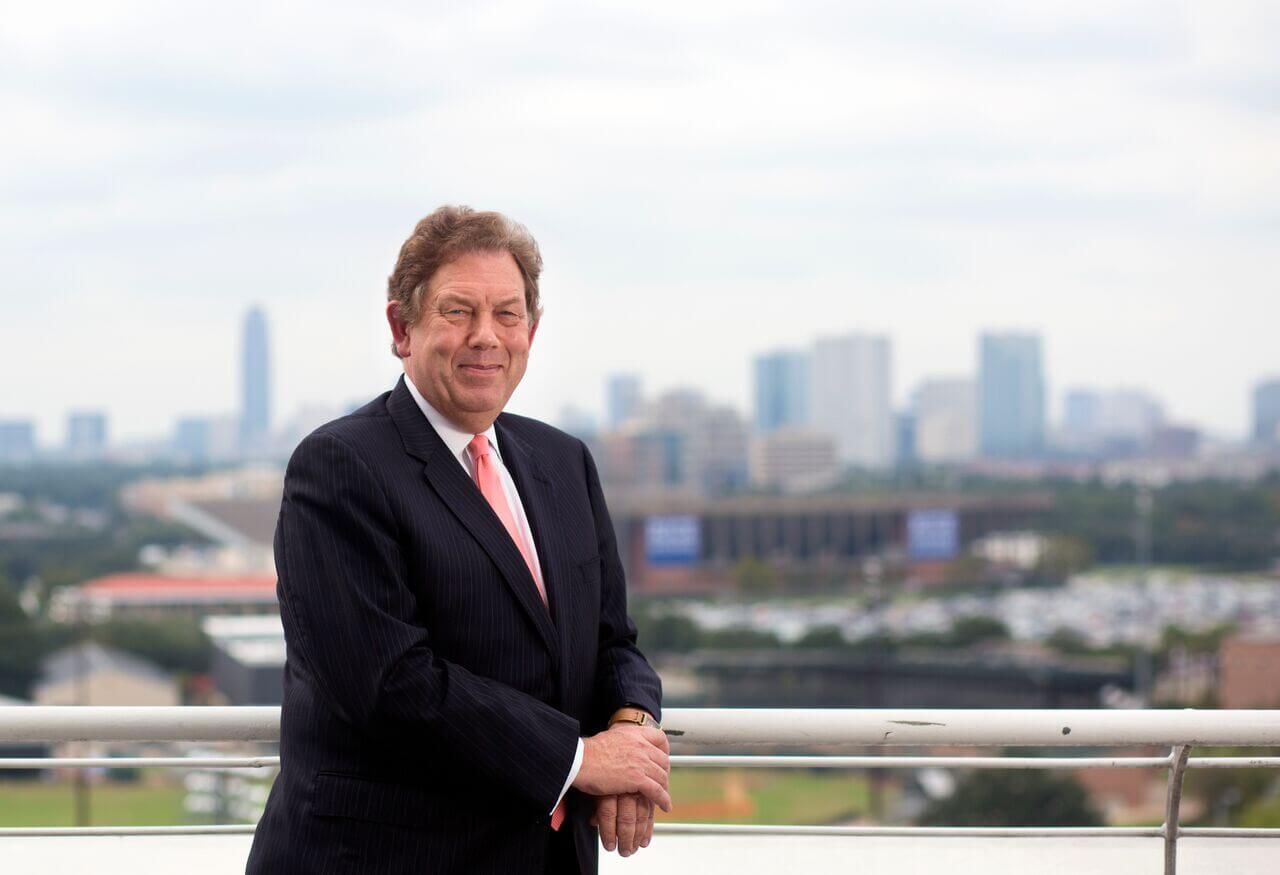 ALAN LUMSDEN, M.D., is chief of cardiovascular surgery at Houston Methodist DeBakey Heart & Vascular Center at Houston Methodist Hospital. He spoke with Pulse—in his Scottish burr—about the Baylor-Methodist schism, the spirit of Dr. DeBakey, and the natural kinship between surgeons and engineers.

Q|Tell us a bit about your childhood.
A | I was raised in a very small Scottish town of 10,000 people. I went to elementary school and high school in this town where my father was the town pharmacist. It was the only pharmacy in town—we called it the chemist’s shop, of course. Then I made the big trip, 20 miles away, direct from high school to medical school in Edinburgh. I was 17; no need to go to college in the U.K. I took a year off halfway through my medical training to complete a degree in pathology, which was incredibly valuable. I was exposed to surgical specimens, to the pathology of disease. I was always interested in anatomy, physiology and pathology and when you combine all those things together, what you get is surgery. 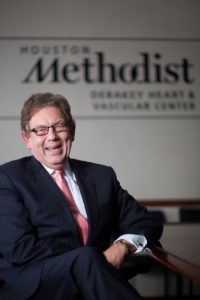 Q | At what point did you leave Scotland for the United States?
A | I was never really planning to emigrate. I hap- pened to be performing an autopsy one day, and there was an American medical student there, doing an elective in our foreign land. Well, that changed the direction of my entire life—romance in the autopsy room! And that led me to emigrate. It was not an easy transition. Ultimately, I received an offer to join the general surgery residency at Emory University in Atlanta.

Q | What was the focus of your training at Emory?
A | I did my general surgery residency and then a vascular fellowship. After training I joined the faculty and subsequently went on to become the chief of the division of vascular surgery.

Q | What was it about vascular surgery that intrigued you?
A | I remember being on the rotation at the VA as a junior-level resident. One of the fellows said, ‘You should think about doing vascular surgery.’ At that time I couldn’t have imagined anything worse. But once you start getting into the procedures, they’re very interesting and technically challenging and immediately gratifying. At that time I also loved trauma. The challenges faced by trauma surgeons were the big vascular injuries; those are the injuries patients died from. So, I actually did the vascular fellowship with a plan to be a trauma surgeon. Halfway through my fellowship, I was offered the opportunity to join the Emory vascular faculty, and jumped at the chance.

Q | At that time, what were we doing for patients with abdominal aortic aneurysms [AAA]?
A | It was all open aortic surgery or nothing. A big operation. A bloody operation. The patient was in ICU for a night or more, in hospital for a week to 10 days. It’d take two months to get over it.

Q | If I was a patient today presenting with the same symptoms, what would you do for me?
A | About 70-80 percent of patients today are treated with stent grafts. We don’t even make a groin incision anymore. These devices are delivered percutaneously and reline the inside of the aorta. That didn’t exist when I trained. Anyone in my specialty of vascular surgery had to completely retrain in imaging, catheters and wires.

Q | It’s similar to fixing a blown tire from the inside.
A | Relining the pipe is basically what it is.

Q | What enticed you to come to Baylor College of Medicine?
A | A friend of mine, Dr. Larry Hollier, now chancellor at Louisiana State University, was a visiting professor at Emory. (His son, Larry, Jr., is a plastic surgeon at Baylor). Larry, Sr. subsequently came down to Baylor, and the chairman at Baylor said he needed a chief of vascular surgery. Larry happened to give him my name. I always blame Larry for how I ended up in Houston.

Q|What did you think of the Texas Medical Center once you arrived?
A | Well, I knew Dr. DeBakey, Dr. Stanley Crawford and Dr. Cooley were all here. These were the men who built the well we now all drink from: contemporary surgical treatment of cardiovascular disease. But I had no idea of the scale of the medical center. So I was completely blown away with what was happening here. But while we at Emory had embraced the endovascular revolution, Houston was behind the times in terms of vascular evolution. The vascular community recognized early on that we needed to change our practice, to retool our workforce and transform how, for example, aneurysm repair—which had been developed in Houston—was now being done. Most vascular surgery was being performed by cardiac surgeons. There were no vascular surgeons here. I was one of the first trained vascular surgeons to move into the medical center, and Dr. Charles McCollum, a cardiovascular surgeon at Baylor, had the vision to encourage this. You’re now starting to see the same kind of change take place in cardiac surgery because of percutaneous valves. I think percutaneous valves are to cardiac surgery what aneurysm repair was to vascular surgery.

Q | What do you see on the medical horizon?
A | The transformation that has taken place is around imaging. It is the integration of imaging into hybrid labs and operating rooms that will absolutely transform how we work. Many procedures that had to be conducted in radiology departments, because of the availability of imaging, will move to cath labs and hybrid rooms. It will be one-stop shopping.

Q | At Houston Methodist, what excites you most about coming to work every day?
A | Let me tell you a story. I don’t want to get into the politics of the Baylor-Methodist split, but when I moved down here I was employed by Baylor. Dr. DeBakey was my boss; life was pretty good. It was a tremendous partnership and, without Baylor and Methodist together, I probably wouldn’t have moved. When the split occurred, for those of us in the middle of it, it wasn’t exactly obvious what to do. I opted to stay at Methodist, where we had a large practice and had already built the first advanced imaging operating rooms in the medical center. It was a very odd time. I’d been in academic surgery my entire life. But now, overnight, at Methodist: no medical students, no resi- dents, no fellows, no research labs. Indeed, there were no departments, no department chairs, no faculty, no institutional review board, no graduate medical education office. Under the leadership of John Bookout and Ron Girotto, Houston Methodist decided to build a brand new academic organization, which, other than the clinical care component, had to be completely retooled from scratch. For me, this was both terrifying and exciting. Really, as an academic organization, Houston Methodist is a startup. Ten years old. I am extremely proud of what has been achieved, the speed at which this has been accomplished and the trajectory of our academic programs.

Q| Tell us about the new North Tower that’s under construction.
A | It’ll open in just over a year and will house the new cardiovascular operating rooms, catheterization labs, cardiovascular intensive care unit and patient care floors. That’s the missing piece for the heart and vascular center. Dr. DeBakey’s spirit is part of the Fondren Brown operating room, which we currently occupy—probably the most famous cardiovascular operating room in the world. We’re still working in the same operating rooms and using the same inten- sive care unit that Drs. DeBakey and Crawford used. They’re functional but not very attractive, and they’re not where we should be at this point in the evolution of the Houston Methodist DeBakey Heart & Vascular Center.

Q | This December marks the 10th anniversary of Pumps & Pipes, an annual event you co-founded. The story goes that you struck up a conversation with a drilling engineer on a flight to Houston and the two of you realized the similarities between drilling for oil and performing heart surgery. Now, there’s an annual symposium that brings together people in medicine, energy, academia and aerospace to exchange and explore ideas.
A | Bill Klein, an Exxon Mobil engineer, and I started P&P, as we call it. It involves the Houston Methodist DeBakey Heart & Vascular Center, ExxonMobil, the UniversityofHoustonandNASA.Wenowhaveteach- ers coming in, rotating through labs to take the message back to students. We’re at the point where we’re trying to figure out what more to do. It’s stretching our capabilities. We webcast to more than 2,500 individual sites around the world. Our next meeting is Dec. 5 at the new Exxon facility in Spring. Come and join us!

Q | There’s such a great kinship between surgeons and engineers.
A | Yes, but physicians take for granted—which we shouldn’t—the privilege of caring for patients. It’s very gratifying. Engineers by and large don’t get that privilege. So when I stand up in front of an audience full of engineers and start explaining that I’ve got a problem with a heart valve or a burst aneurysm, and explain this as a pump or a pipe problem, well you can see the light bulbs going off. The engineers are highly motivated by the fact that knowledge they have can be used to help their fellow man. That, in essence, is what pumps and pipes is about. We call it “exploring the other guy’s toolkit.”