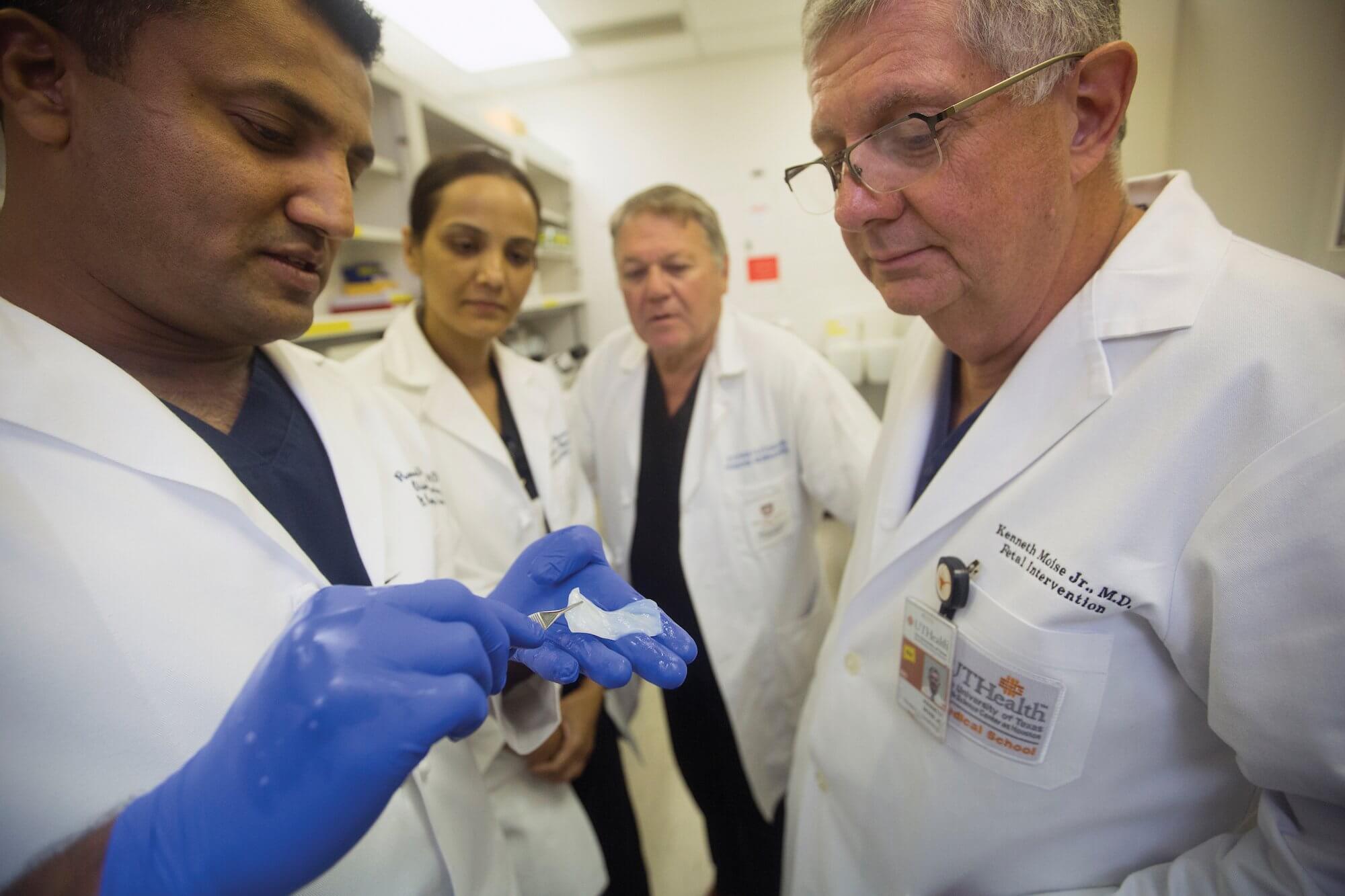 Seven years ago, Lovepreet K. Mann was standing at a crosswalk in Salt Lake City with her husband and colleague, Dr. Ramesha Papanna. They had been testing an underwater glue for fetal surgery, and a thought suddenly occurred to her. There, on the street in Utah, the couple began a discussion that would ultimately lead to a patch made from human umbilical cord. Today, it is being used to help repair spina bifida in babies before they’re even born.

Spina bifida is a birth defect characterized by an incomplete closing of the bones and membranes surrounding the spinal cord. In most cases, tissues and nerves are exposed in an opening along several vertebrae in the baby’s back, making him or her highly susceptible to life-threatening infections and sometimes triggering complete paralysis of the legs as well as bladder incontinence and a range of cognitive difficulties. The condition is typically detected in a pregnant woman’s 20-week anatomy scan, during which time the ultrasound tech identifies either a lemon-shaped head or a “banana sign,” both caused by pulls in the cranial area from the spinal malformation.

For decades, the standard treatment has included postnatal surgery, but sentiments shifted after the groundbreaking NIH-funded MOMS Trial (Management of Myelomeningocele Study) initiated in 2003, in which standard repair results were benchmarked against more than 90 fetal repair cases. The results spoke volumes. Babies who underwent fetal repair were much less likely to need a ventricular shunt for hydrocephalus. Furthermore, twice as many children from the fetal surgery group were able to walk without crutches at 30 months of age, compared to those who received the surgery after birth.

Not all patients qualify for the highly specialized, extremely complex procedure, which involves either pulling the skin together or stitching a patch directly onto the spina bifida site of the fetus while it is still in the mother’s womb. Likened to a “super C-section,” the intricate series of surgical steps (making an incision in the mother, protecting the placenta, opening up the amniotic sac, preserving the fluid, performing the repair through a tiny three-inch by four-inch window in the uterus, replacing the fluid, closing the uterus and then the mother layer by layer) is also not without risk. Most babies who undergo fetal surgery will be born prematurely. There is potential for post-surgical complications and infections. There is the risk of death. And, until Mann, a research instructor in the Department of Obstetrics, Gynecology and Reproductive Sciences at McGovern Medical School, thought of using the regenerative material she and Papanna had been studying to patch the site, there was the likely possibility of scar tissue formation, which meant further injury to the spinal cord as the child grew and developed.

Originally, Papanna, the principal investigator and an assistant professor in the Department of Obstetrics, Gynecology and Reproductive Sciences at McGovern Medical School at The University of Texas Health Science Center at Houston and a maternal-fetal medicine specialist at The Fetal Center at Children’s Memorial Hermann Hospital, was interested in using amniotic membrane from the placenta to seal fetal membranes—the layers of the amniotic sac—after surgeries in utero. He and Mann flew to Miami to meet with expert ophthalmologist Scheffer C.G. Tseng, M.D., Ph.D., who was using a human amniotic membrane patch to repair corneas. After spending a week in his center, the two were even more impressed at its regenerative properties.

What makes the material so “magical,” as Papanna puts it, is a compound called heavy chain hyaluronic acid/pentraxin3, which initiates natural regeneration of the tissues at the repair site, rather than healing by scar formation. The distinction is important in spina bifida repair since one creates a healthy, biologically compatible environment while the other often leads to scarring of the spinal cord to the repair site. This can lead to loss of bladder and motor function later in life. If scarring occurs, further surgeries are required to remove the scar tissue and protect the spine.

“The molecule is the same one that is present around the egg of every woman who ovulates every month, in the lining of the womb and the placenta. This is essential to maintain normal reproductive function,” Papanna said. “Nature has created a solution, and we have harnessed it to our benefit.”

But this wasn’t the fairytale ending Papanna and Mann had hoped for. Despite its phenomenal healing properties, the amniotic membrane patch was paper-thin and flimsy, making it difficult to work with.

“If the site gets infected, the baby dies,” explained Kenneth Moise, M.D., director of the Fetal Intervention Fellowship Program at McGovern Medical School and co-director of The Fetal Center at Children’s Memorial Hermann Hospital. “It’s covering the spinal cord, so it has to be a watertight seal—CSF [cerebrospinal fluid] can’t leak out and infections can’t come in.”

Unfortunately, every time Papanna practiced his stitches on the delicate material, it tore. So he looked to the umbilical cord, which contains the same “magical” molecules as the amniotic membrane, but is thicker and far more pliable.

“It was so obvious,” Papanna said. “The umbilical cord has the same regenerative properties.”

Mann and Papanna contacted Tseng, who created a new patch and sent it back to them for testing. After suturing multiple chicken breasts and injecting blue dye as a proxy for cerebral spinal fluid, Papanna and Mann were satisfied that it could provide the watertight seal necessary for spina bifida repair. Papanna’s lab studied its performance in animal models and he was granted approval from the FDA for clinical use in three cases. He and a team of surgeons including Moise, Kuojen Tsao, M.D., co-director of the Fetal Center at Children’s Memorial Hermann Hospital and an associate professor at McGovern Medical School’s Department of Pediatric Surgery, and pediatric neurosurgeon Stephen Fletcher, D.O., an associate professor in McGovern Medical School’s Department of Pediatric Surgery, performed the first surgery in July 2015. A second case was performed a few months later, and the results of the two surgeries were published in Obstetrics and Gynecology in July of this year.

So far, they have been success stories. In both cases, the surgeries went well and the babies were born at 37 and a half weeks, just three weeks shy of full term. At birth, the patch was still in place and there were no signs of leakage or fluid inside. Moreover, both babies retained lower limb function as well as normal bowel movements. The one peculiarity was that, at birth, the site had not yet regenerated—it was semi-translucent, and when Papanna tapped the baby’s head, he could see the cerebrospinal fluid underneath the patch. Within a few weeks, however, the skin grew into the patch exactly as expected.

“Every day you could watch the blood vessels and the tissues grow closer together,” Papanna said. “It was incredible.”

A third case was completed and as the months pass, all three babies continue to exhibit normal leg movement and bladder control and no need for further repair. The true test will come with time, but already the patch is showing promise as the next big advancement in fetal surgery: whereas the MOMS Trial demonstrated that fetal surgery could vastly improve outcomes in mobility and neurological development, this patch could take the procedure a step further, resulting in an even more improved outcome for children with spina bifida. Perhaps, in the future, there will be no more need for surgical revisions, no additional repairs, few if any symptoms. An entirely normal childhood.

“People are trying stem cells and different ‘off the shelf’ patches, but this patch is doing more than any of the others,” Mann said. “It’s helping with regeneration of existing skin. It’s creating organized growth of tissues, and the body doesn’t reject it. Even more, its source is abundant since the umbilical cord from every pregnancy could produce a new patch.”

“Where are all the other babies?”

Currently, Papanna and his team are pursuing additional clinical studies and working to expand their approval from the FDA for more cases. They hope to apply the patch using fetoscopic repair techniques, which would reduce surgical risks to both the mother and the baby. Ultimately, they also aim to create a standard of care for babies diagnosed with spina bifida.

“Right now, the techniques being used to close the spina bifida are all over the map, and the outcomes vary considerably,” said Moise, who recently returned from Botswana where the International Fetal Medicine and Surgery Society convened for their annual conference.

“Nobody has a standard way of treating this, but we all agree that whatever patches or fetoscopic approach we use, the outcomes should be judged against the MOMS Trial. We all want to develop something better than what we’re already doing.”

Moise expects that a standard of care, as well as increasingly positive outcomes, will also encourage OBGYNs to refer more of their patients to fetal centers for counseling.

“We should be three times busier than we are,” Moise said. “There are over 200 babies born in Texas every year with spina bifida. Two hundred. And we might do eight or 10 cases a year. Where are all the other babies?”

Even more, he hopes standardizing treatment will change the climate surrounding fetal repair surgery worldwide. Currently, there are only a handful of sites outside the U.S. that do fetal surgical repairs. According to Moise, many countries, including most of Western Europe, consider a spina bifida diagnosis the equivalent of an unviable pregnancy.

“They think we’re crazy to do what we do,” Moise said.