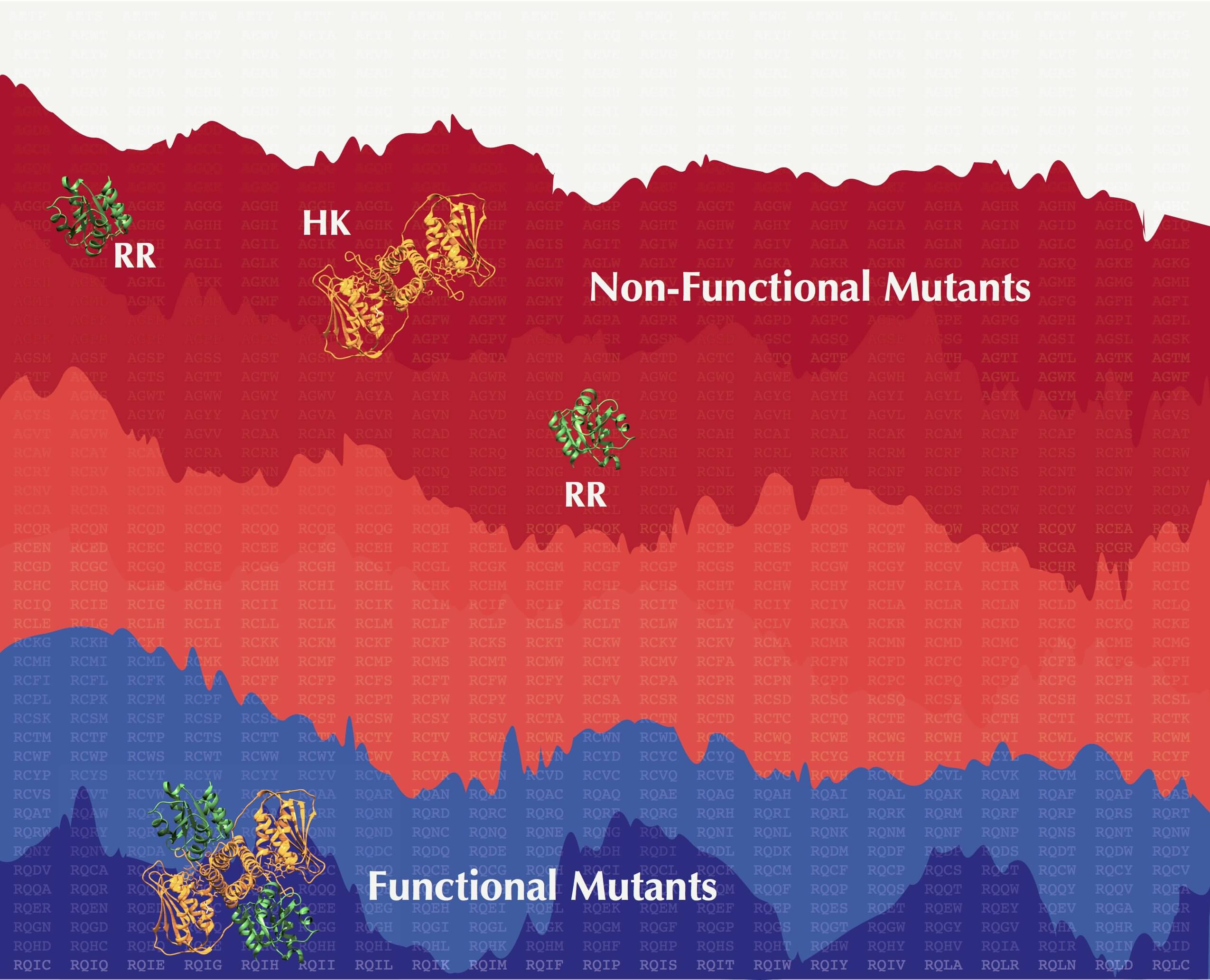 Protein pairs that control stimulus response in bacteria maintain a sensitive balance between interaction specificity and promiscuity, according to Rice University scientists.

A computational model developed at Rice’s Center for Theoretical Biological Physics will help biologists take advantage of the homologous nature of bacterial signaling systems to reveal the minimal mutations that allow a signaling protein to be efficiently reprogrammed to prefer a nonpartner signaling protein.

Their open-access paper on the topic published online by the Oxford University Press journal Molecular Biology and Evolution will be featured on the cover of the December issue.

The research led by Rice biophysicist and protein-folding pioneer José Onuchic, postdoctoral researcher Ryan Cheng and alumnus Faruck Morcos, now of the University of Texas at Dallas, expands upon previous work to model two-component systems that co-evolve amino acids at their binding surfaces to recognize each other. Those systems consist of proteins in bacterial cells that signal each other to sense and respond to stimuli.

“We’re showing for the first time that the method has enormous power for designing new stimulus-response mechanisms in organisms,” said Onuchic, who predicted that the research will bring the disciplines of synthetic biology and systems biology closer together. Synthetic biologists engineer organisms like bacteria to produce chemicals or act as components in biological circuits. The Rice team’s goal is to simplify their work by allowing them to model many possibilities before taking a project to the lab.

“There are three goals in synthetic biology,” Onuchic said. “The first is to force an organism to do something it’s not supposed to do, like make insulin. The second is to change a mechanism to respond differently to a particular stimulus. There may be many reasons, and that may affect the phenotype of how an organism behaves. The third is to rewire different parts of an organism to understand what the parts are and what happens if we switch them. That’s what our project is about,” he said.

“We want to understand sequence selection for two-component systems but we also want to demonstrate that our model can predict mutational phenotypes,” said Cheng, the paper’s lead author. “With this method, we’re telling people that if they want 20 functional mutants, they can just pick the top 20 produced by our model. We’re simply ranking them. Someone who wants to design novel interactions could use our model, select mutations and generate those mutations.”

Every cell contains thousands of two-component signaling proteins programmed to find each other and serve as sensors that trigger a cell to act, most often through the activation or repression of genes.

“These systems have lots of response-raising kinases (the sensor component) and there’s a lot of promiscuity,” Onuchic said. “That’s important, because a system doesn’t have one copy of each thing; it has multiple copies of everything, and they’re interacting with each other all the time.”

“Proteins are so similar, with minor variations between them, because you want them to see everything in their environments,” he said. “If they were meant to be completely partner-specific, with no promiscuity, they would be very different from each other. The problem when you make these mutations is that you may offset the balance between interacting with its signaling partner versus interacting with other signaling proteins in a deleterious way.”

He said the open-access model will make it faster and easier for researchers to plug in mutations and determine whether and how they will function.

“Now we can apply these models to predict how mutations affect phenotypes (an organism’s characteristics). The direct connection between sequence-level mutations and how they lead to the emergent properties of an organism is a holy grail of molecular biology,” he said.

Co-authors of the paper are Olle Nordesjö and Samuel Flores of Uppsala University, Sweden; Ryan Hayes of the University of Michigan, Ann Arbor; and Herbert Levine, the Karl F. Hasselmann Professor of Bioengineering and a professor of physics and astronomy and of biochemistry and cell biology at Rice. Morcos is an assistant professor of biological sciences at the University of Texas at Dallas. Onuchic is Rice’s Harry C. and Olga K. Wiess Chair of Physics and professor of physics and astronomy, of chemistry and biosciences. Onuchic and Levine are co-directors of the Center for Theoretical Biological Physics.

The National Science Foundation, Uppsala University and the Swedish Foundation for International Cooperation in Research and Higher Education supported the research.