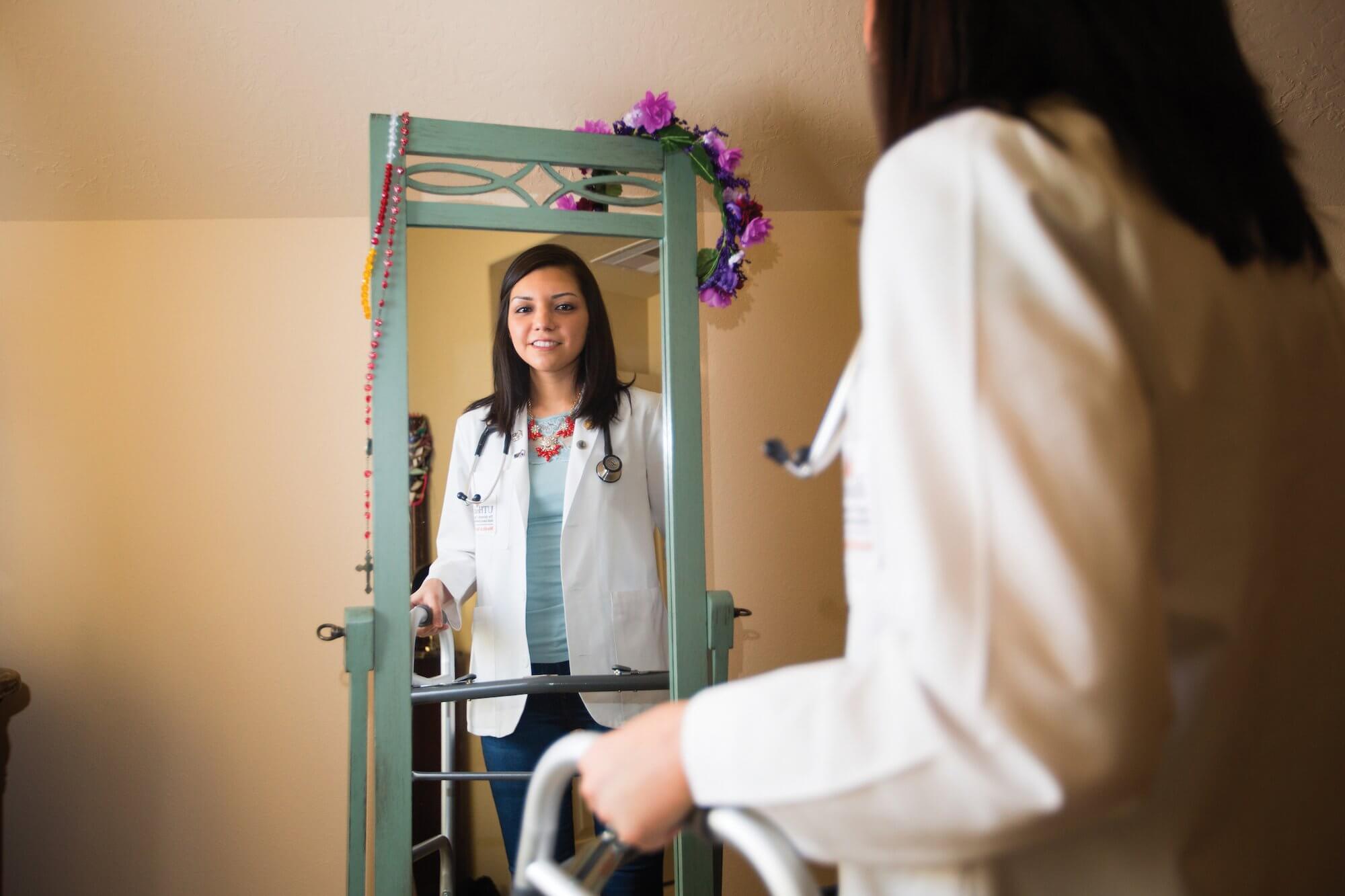 At the time, Claudia Martinez considered the accident to be minor, miraculous even. Not only were the passengers in both cars unharmed, but the cyclist, whose bike lay crumpled under her car, had managed to throw himself off to the side of the road in the split-second before impact.

That was supposed to be the end of the story, but a short while later, Martinez began suffering from nearly constant headaches. Piercing and dull at the same time, the pain was soon accompanied by tremors in her hands and lower limbs similar to those observed in patients with Parkinson’s disease. One day, her small frame buckled to the floor after she’d tried to stand up and couldn’t feel her legs.

It was 2011, and Martinez did not have time to be sick. A diligent student, she was engrossed in pre-med coursework at the University of Houston, her days consumed with organic chemistry, violin practice, research, volunteering and shadowing physicians. So when an MRI revealed a neurological condition called Chiari malformation, Martinez confronted the diagnosis with her characteristic tenacity.

“I remember when I first met with the neurosurgeon, I said, ‘I’m not here to just be cured, I’m here to get well enough to live out my life doing what I love,’” Martinez recalled on a recent morning at home. Parked next to her at the breakfast table was a wheelchair she was learning to live without. Using the handles to steady herself, Martinez, 25, was once again walking after undergoing her fifth brain surgery in as many years.

Chiari malformation occurs when the cerebellum, which sits above the spine and coordinates and regulates muscular activity, extends lower than  it should, spreading into the cervical spinal canal and compressing the brainstem. Some individuals with the condition are completely asymptomatic, while others experience mild to severe headaches and motor and sensory problems. And while nobody knows for certain whether the jolt from the crash triggered Martinez’s condition, Chiari malformation, which is generally considered to be congenital, may also be acquired later in life.

Depending on the severity of symptoms, treatment often includes a surgical procedure called posterior fossa decompression. This involves removing part of the back of the skull and a small portion of the first cervical bone to give more space for the cerebellum, and then adding a patch to expand the dura (the covering of the brain). For most, multiple brain surgeries and the extensive rehabilitation and recovery process that goes along with them would be more than enough to fill the 1,800-plus days since Martinez’s initial diagnosis. But this patient is different. Described by her mother as the strongest woman she knows, Martinez refused to let these setbacks steer her off course. Not only did she manage to complete her undergraduate degree— the first in her family to do so—but she is currently wrapping up her second year at McGovern Medical School at UTHealth. All this despite yet another health emergency this past July that left her hospitalized and barely able to move for weeks.

It was early summer and Martinez was finally enjoying some stability, waking up early to memorize tumor histology and staying late at the hospital to work on a research project with one of her mentors, Dr. David Sandberg.

“I didn’t know much about her medical history and I didn’t feel it was my business to ask,” said Sandberg, chief of the division of pediatric neurosurgery at McGovern Medical School and a practicing neurosurgeon affiliated with Children’s Memorial Hermann Hospital. “She was working with me on some research and she was extraordinary in that capacity—very bright and hardworking and determined.”

But then, very much out of character, Martinez was suddenly absent without explanation.

“I remember emailing her to check in, just to see if everything was OK, and she told me she had been admitted to the hospital,” Sandberg recalled. “I  was shocked.”

It turns out that over the course of the previous months, Martinez had lost nearly all muscle control in her pharynx and esophagus, making it extremely difficult to swallow. After choking on her food several times, she drastically reduced the quantity and consistency of food she allowed herself to consume. Determined not to be derailed in her studies yet again, she focused on school and kept mum about the issue. Eventually, the lack of nutrients in her body landed her in the emergency room.

An extensive GI workup revealed nothing, so her physicians, aware of  her surgical history, turned to brain imaging. The tests were inconclusive, but results from her MRI did show something unusual: her brainstem had become tethered to the dura, pulling it sharply to the right when it should have been floating freely in cerebrospinal fluid. Because the brainstem plays an intricate role in the act of swallowing, the question loomed: was this the cause of her choking?

“My opinion was that I wasn’t sure,” Sandberg said. “It was compelling enough with the brainstem being pulled so much that if no other cause could be found, I recommended surgery to untether the brainstem, which is an unusual operation.”

In a serendipitous chain of events born out of timing, expertise and old-fashioned goodwill, Sandberg, who typically only operates on children, agreed to perform the surgery. After freeing the brainstem from the dura, his team performed a duraplasty using Martinez’s own pericranium as a tissue graft to increase space for the brainstem to float inside the skull.

After months of recovery and rigorous rehabilitation at TIRR Memorial Hermann, Martinez has once again developed sensation in the back of her throat and is slowly regaining a normal gag reflex. She has relearned how to walk and, thanks to an accommodating group of administrators and professors at McGovern Medical School, is catching up on her coursework at home. She even managed to find time to organize her annual Chiari malformation awareness walk. Working with the national organization Conquer Chiari, Martinez raised more than $30,000 this year and has singlehandedly created a local support network for individuals in the Houston area diagnosed with the condition.

“She just keeps working; you can’t get her to stop,” Sandberg said. “She’s just so determined to not let her condition impede her goals.”

Martinez and her physicians hope this will be her last surgery, which means a clear road ahead for her to become a pediatric neurosurgeon herself.

“I’ve wanted to become a doctor since I was little, but I obviously didn’t expect to become a doctor by being a patient this entire time,” Martinez said. “Going through this made me even more certain that this is what I want  to do. A lot of people are diagnosed with illnesses and they think it means their life is over, but I believe sometimes in those diagnoses your life is just beginning.”