Is Your Cabbage Asleep? Adventures in Plant-Based Medicine

Is Your Cabbage Asleep? Adventures in Plant-Based Medicine 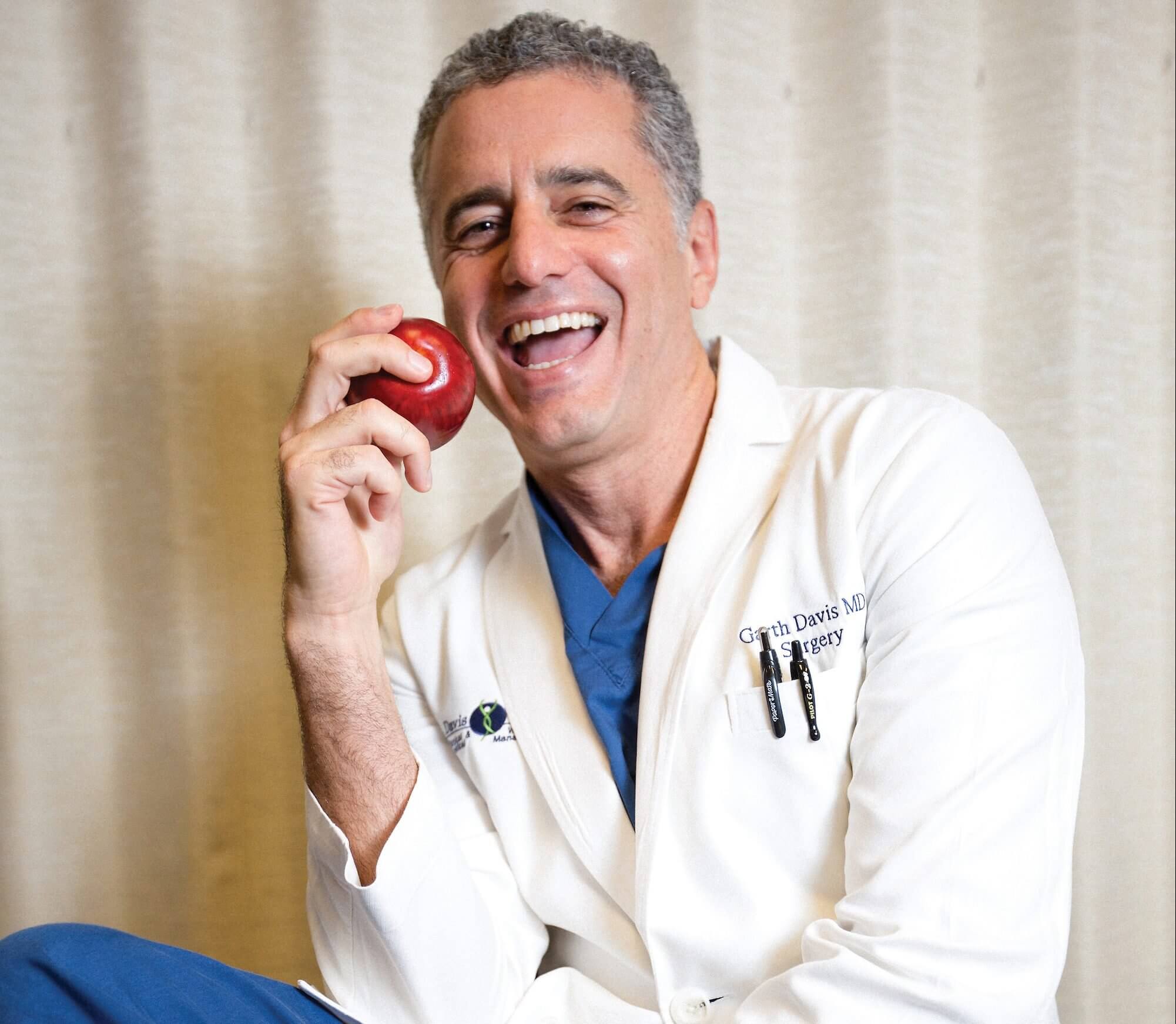 When bariatric surgeon Garth Davis was 35 years old, he took a health screening for a life insurance policy. The results were anything but positive.

“I didn’t think I was unhealthy, but my cholesterol was through the roof, I was hypertensive and I had a fatty liver,” Davis said. “Shocked, I went to see an internal medicine friend of mine, and he told me I could take all of these medicines for my problems, but I knew that would just lead to more and more medicine throughout my life.”

Davis, the medical director of the Bariatric Surgery Program at Memorial Hermann Memorial City Medical Center, didn’t want to be medicated for the rest of his life. So he went looking for some answers.

He discovered that the United States is one of the least healthy countries in the world and that Americans have some of the lowest life expectancies on the planet. So which countries were healthy, Davis wondered, and how did they get that way?

His research led him to author Dan Buettner’s Blue Zones study on the world’s happiest and longest-living cultures. One of the things these cultures had in common was diets based mainly on plants and carbohydrates.

“I was kind of surprised because I had been telling all of my patients not to eat carbs, and I had purposefully avoided them myself,” said Davis, also an assistant professor of surgery with McGovern Medical School at UTHealth and a member of UT Physicians.

Particularly inspiring to Davis were the Okinawans of Japan, who live an average of 10 to 15 years longer than Americans. Staples

of their diet include low-calorie seaweed and yams. Davis was also fascinated by the Seventh-Day Adventists of Loma Linda, Calif., a religious group that mixes spirituality with healthy living. They consume a lot of beans, soy milk and tomatoes, shown to help reduce the risk of certain cancers and heart disease.

Davis also considered the European Prospective Investigation into Cancer and Nutrition (EPIC) study, jointly coordinated by Imperial College London and the International Agency for Research on Cancer in Lyon, France. The study followed some 370,000 men and women in 10 European countries for five years and found that meat consumption was linked to weight gain—even chicken, one of the lean proteins Davis often recommended to his patients.

“It got me thinking that maybe everything I was told before was completely wrong,” Davis said.

The ultimate irony for Davis: As a bariatric surgeon, he performs surgery on the stomach and intestines of patients to induce weight loss. His work addresses the effects of a poor diet. But what about the causes?

What if he could catch patients before bariatric surgery was necessary? Or at least teach his patients how to eat healthier after their surgeries?

Humans have always used plants to treat illness and disease. Many of our most common medicines come from plant extracts or synthetic plant compounds. Aspirin is derived from willow bark. Quinine, which is used to treat malaria, comes from the bark of the cinchona tree. Muscle creams, cold medicines and lozenges often contain mint.

Today, diet plays a key role in plant-based medicine, a growing industry made popular by people craving healthier lifestyles. The dietary supplements business earns $37 billion a year, according to the National Institutes of Health, and $5.7 billion of that is spent on multivitamins.

But there is a lot of misinformation out there about what eating certain plants can and cannot do, said Roderick Dashwood, Ph.D., director of the Center for Epigenetics & Disease Prevention in the Institute of Biosciences and Technology at Texas A&M University. Some people expect a “simple magic bullet,” and are disappointed when they don’t get the results they anticipated.

Dashwood is researching how phytochemicals—chemical compounds that occur naturally in fruits, vegetables, grains and other plant foods—have been linked to reduction in the risk of major chronic diseases. Some researchers have even created genetically engineered plants with increased levels of a certain phytochemical.

Organizations including the National Institutes of Health and the American Cancer Society generally recommend that people consume five to nine servings of fruits and vegetables per day, Dashwood said. But he was intrigued by an American Institute of Cancer Research study that asked: “What if people actually followed that recommendation? Would it really show a benefit?”

“They found out that yes, indeed it does,” Dashwood said. “If you switched from a bad diet to one of these improved diets, there was reduction in certain cancers. However, people improving their diets also did other things like quit smoking, limit their alcohol intake and get on the treadmill for the first time at the gym. So it is hard to say it was just the plant-based diet.”

“It blew my mind,” Davis said. “Putting heart disease patients on a plant-based diet showed a regression of plaque in the vessels—not just a stabilization, but regression. Trials showed unbelievable weight loss, showed people with prostate cancer reversal or regression. There was a study that found total lengths of chromosomes grew longer with a plant-based diet.”

Wake up your vegetables

Plants, like people, have a circadian clock, a day-and-night cycle. To protect themselves during the day—when they’re most prone to insects, bacteria and viruses—plants release phytochemicals to defend themselves from these pests. In some edible plants, these same health-active compounds have potent anti-cancer properties for people.

Scientists at Rice University are exploring the health value of vegetables at different times of the day. Janet Braam, Ph.D., Weiss

Professor and chair of the department of BioSciences, wondered what would happen if a plant’s day-and-night cycle was reversed.

Using Arabidopsis plants, Braam and her graduate student Danielle Goodspeed found that if a plant thought it was night, it would not produce enough phytochemicals to ward off insects that attack during the day.

“Eventually, we realized that the plants’ clocks were controlling the level of defense chemicals, so at the time of day the insects eat, the plants accumulated these phytochemical just in case the insects attacked,” Braam explained.

The Arabidopsis plant is related to cruciferous vegetables like cabbage, broccoli and cauliflower, so Braam’s team headed off to the market to buy cabbage heads. They brought cabbages back to the lab, reset their clocks and confirmed their theory that even cabbages that had already been picked could be retrained to produce insect-repelling phytochemicals.

They found that the circadian clock of the vegetables, which is affected by light and temperature, could cause the vegetables to produce more or less of the phytochemical depending on the time of day.

“Our research showed it could make sense to eat the cabbage in the middle of the day when we found that the phytochemical implicated in anti-cancer efforts were the most abundant,” Braam said.

After working with cabbage, the team decided to try their technique on other fruits and vegetables, including spinach, lettuce, zucchini, sweet potatoes, blueberries and carrots.

All of them were able to show time-dependent changes similar to the cabbage, Braam said.

Her team is still working to determine the optimal time to eat fruits and vegetables. But Braam thinks this type of research could help food producers target the peak time to freeze or preserve certain plants—to capture them when their health-active compounds are most potent.

“Plants have the potential for providing health-active compounds that could affect certain diseases, but whether the plant circadian clock is enough to have a big health or nutritional impact, we don’t know yet,” she said.

Cruciferous vegetables also played a key role in a 2015 study by Dashwood and his colleagues, including Praveen Rajendra, Ph.D., an assistant professor in the Institute of Biosciences and Technology at Texas A&M. Published in Clinical Epigenetics, the study asked whether sulforaphane—a type of phytochemical—helped to reduce indicators of cancer risk. Sulforaphane occurs naturally in broccoli and other cruciferous vegetables such as Brussels sprouts, kale, cauliflower and cabbage.

To conduct their research, Dashwood and Rajendran asked patients scheduled for routine colonoscopies to complete a detailed food questionnaire. Those that ate more servings of cruciferous vegetables were shown to have higher expression levels of a tumor suppressor gene called p16 than those who ate few or no servings.

Dashwood and Rajendran also found that the p16 enhancement benefits continued even after the vegetables were not consumed every day.

“Our research hints at the possibility that epigenetic mechanisms (how genes are read by cells) are initially triggered by sulforaphane and could be sustained, at least in the short-term, even after compounds are eliminated from the body,” Rajendran said.

In the meantime, individuals who follow nutrient-rich plant-based diets enjoy prolonged health benefits. Dr. Garth Davis has maintained his plant-based diet for a decade. He didn’t just drop meat cold turkey, but reduced consumption gradually over time. Today, both his cholesterol and blood pressure are normal, and he no longer has a fatty liver.

Davis also stopped using the word “protein” when discussing food plans with patients. Instead he pitches beans, grains, fruits and vegetables, something that has revolutionized his medical practice, he said. Through social media, support meetings, tips for success, nutrition education and tasty recipes, Davis helps patients and the community with healthier choices.

People tell Davis he must have great willpower to avoid meat, but he says willpower has nothing to do with it. He just likes the way he feels.

He craves fruits and vegetables, and the thought of eating cheeseburgers—his former favorite food—actually repulses him.

“I’m not out to create new vegetarians or vegans, just better plates for my patients,” Davis said. “We have grown up where animal protein is the center of the meal, but now I eat beautiful bowls of lentils and yams and vegetables, and it tastes great.”

Eating well doesn’t just help fight disease. It helps the body perform. Healthy people have close to 500 species of bacteria living in harmony in their stomachs.

Problems occur when that harmony is disrupted, either by genetics or the wrong food, says Jeff Tabor, Ph.D., assistant professor of bioengineering at Rice University. Disruption can cause inflammation, which could lead to intestinal issues such as Crohn’s disease or diverticulitis.

Eating probiotics—live micro-organisms commonly found in yogurt and other dairy products—has been widely shown to help remedy the disruption in gut bacteria and stimulate the growth of good bacteria.

“Certain foods encourage the growth of good bacteria,” Tabor said. “For example, plants have fiber, like those long, stringy parts of celery. We can’t break that fiber down, but the good gut bacteria can, and can then make beneficial molecules that are important to us.”

Tabor wants to engineer diagnostic gut bacteria. That way, if a doctor suspects a problem, a patient could take a drink home that would produce a visible blue pigment in his or her stool. In just one day, the doctor would know if additional tests were needed.