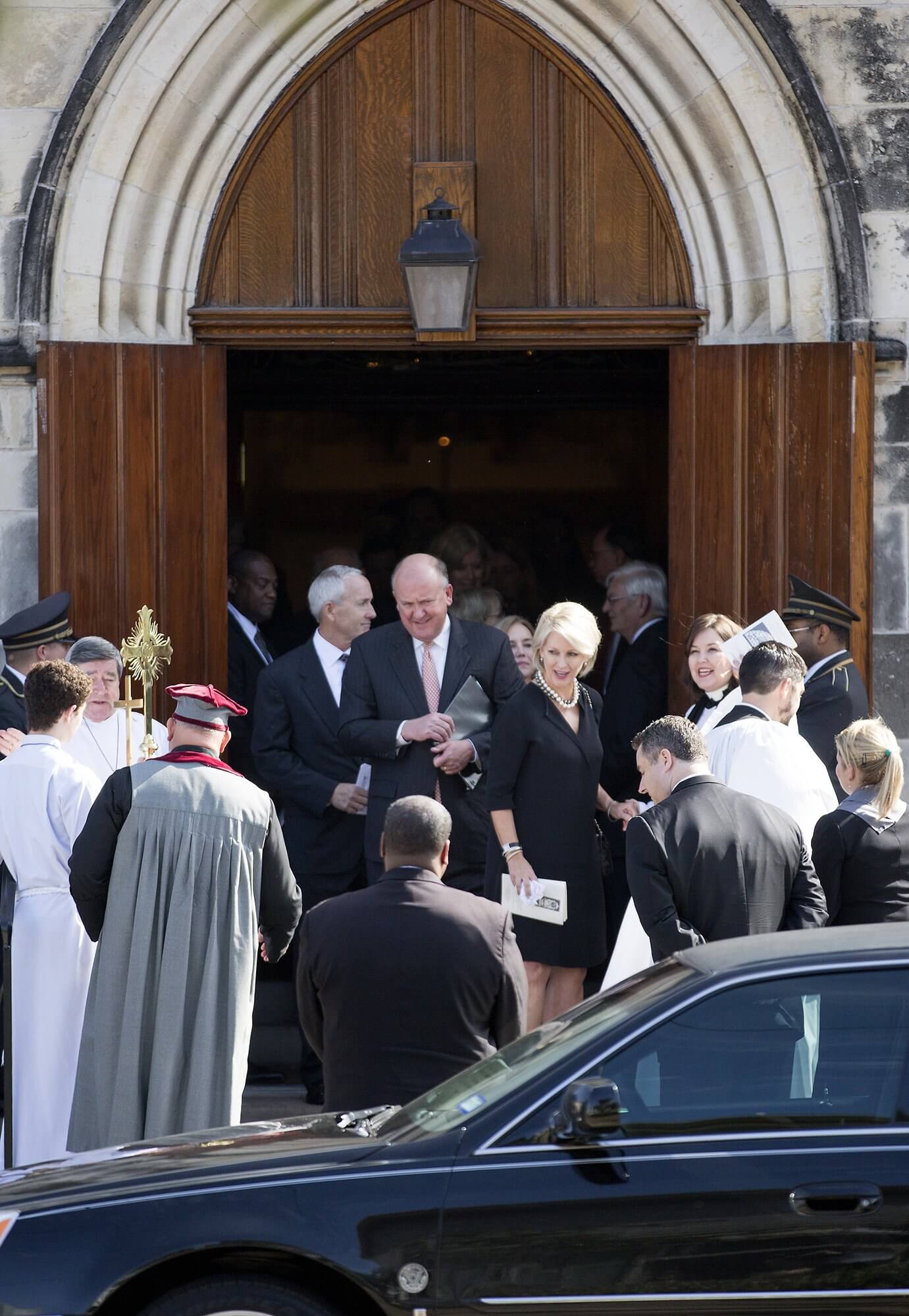 Friends and family of famed heart surgeon Denton A. Cooley, M.D., gathered on Monday, Nov. 28, to honor his life and legacy. The memorial service was held at Trinity Episcopal Church of Houston, the same church where Cooley was baptized and confirmed.

Cooley, who performed the first successful human heart transplant in the United States and was the first heart surgeon to implant a total artificial heart in a human, died Nov. 18 at age 96.

In addition to his extensive accomplishments and contributions to the field of cardiovascular surgery, he was known for his unwavering dedication to patients and enduring work ethic.

“My dad was a great man,” said Mary Cooley Craddock, one of Cooley’s daughters, who spoke at the service. “He was also a good man. He will be remembered for his contributions to surgery, the doctors he trained, the lives he saved, for his work ethic, his kindness, his good work and his sense of humor. But my sisters and I will always remember him as a great father.”

Cooley “was not one of those fathers who came home at 5 o’clock for dinner,” Craddock said. “Our mother held down the fort. He was at the hospital saving lives. We were just so proud.”

Craddock told the crowd gathered at the memorial service that her father retired from surgery at age 88, but continued to put on his work clothes and go to his office every day. He spent time working on his memoir, visiting patients, attending rounds and helping with hospital business.

“He always said, ‘I would rather wear out than rust out,’” Craddock said. “Like the Energizer Bunny, he just kept on going.”

Cooley attended the University of Texas, where he was a varsity basketball player. After two years at The University of Texas Medical Branch at Galveston, he transferred to Johns Hopkins University School of Medicine, graduating in 1944. He went on to serve as a faculty member of what is now Baylor College of Medicine alongside the late Michael E. DeBakey, M.D., a fellow surgeon and cardiovascular pioneer who was then the chairman of the Baylor department of surgery.

The 1950s and 60s ushered in exciting advancements in cardiovascular surgery—from the introduction of open-heart surgery, to transplantation, to mechanical assist devices—and Houston surgeons were at the center of it.

The Texas Medical Center was growing at that time, and Cooley saw an opportunity to create a heart institute in a clinical partnership with what is today CHI St. Luke’s Health–Baylor St. Luke’s Medical Center.

Cooley founded the Texas Heart Institute in 1962 and served as its surgeon-in chief for more than 40 years.

Charles “Chuck” Fraser, M.D., chief of the division of congenital heart surgery at Baylor College of Medicine and co-director of the Texas Children’s Heart Center, also spoke at the memorial service to pay respects to the man he knew as his father-in-law and a leader in cardiovascular medicine.

“My belief is that what made Dr. Cooley so consistently successful—beyond his innate abilities—was his adherence to his core identity as a physician,” said Fraser, who is married to Cooley’s daughter, Helen. “He never lost sight of his purpose, despite his notoriety, the awards and the public attention. He remained a dedicated physician throughout his life.”

Cooley published more than 1,400 peer-reviewed articles, educated 136 cardiothoracic surgery residents and 927 cardiovascular fellows over the span of his 60-year career, according to Fraser. But he was also famous for his 40-year feud with DeBakey.

“The entire medical world knows of the competition between Dr. Cooley and Dr. Michael DeBakey,” Fraser said. “I choose to characterize their relationship as a competition—the competition that characterized the rapid development of heart surgery and established Houston, specifically the Texas Medical Center, as the recognized epicenter of cardiovascular medicine.”

Monday, Nov. 14 was Cooley’s last day at the hospital, where he talked with Fraser about upcoming surgical cases and advancements in treating pediatric heart disease.

“I know they’re together now, making rounds for eternity,” Fraser said. “His legacy lives on in the hearts and lives of caregivers he worked with and trained, and the families he so cherished.”

Cooley and his wife had five daughters, one of whom preceded them in death, as well as 16 grandchildren and 17 great-grandchildren.

Although only friends and family were allowed to attend the memorial service, hundreds of viewers tuned in to Facebook to watch the live stream, prompting former staff, patients and their families to post heartfelt comments.

Becky Guillot Cortese was a junior nursing student at Texas Woman’s University in 1975 when she first met Cooley.

“I would come in to study charts in the evening,” Cortese wrote. “One night a kind man came in and asked me if I understood what I was reading. I confessed that I did not. He settled in and tutored me very patiently for several hours, until he had answered every question I could think of. That man, of course, was Dr. Cooley. When I made rounds with him he showed great humility. I graduated in 1976, ending my tour on his post-op floor much the wiser for my 2 years under his wing. I was very fond of him and have never forgotten his kindness to me.”

Others on Facebook took the opportunity to thank Cooley for saving the lives of their loved ones.

“Thank you, Dr. Denton Cooley, for giving my son his life,” wrote Dolores Moseley-Hassan. “He was only 15 months old when you performed your miracle surgery. Tyson is now 36 years old. I will forever be grateful to you.”

And Gretchen Odum wrote: “You will be missed, but your legacy lives on through your wonderful family and the lives that you have touched. Thank you for the 13 extra years we had with Marvin and the friendship we had with you and Louise and the family.”